This event is organized by DC Francophonie Festival / the Cultural Services of the Embassy of France / Québec BD / La Maison Française.
An opportunity to meet four francophone comics authors from different horizons 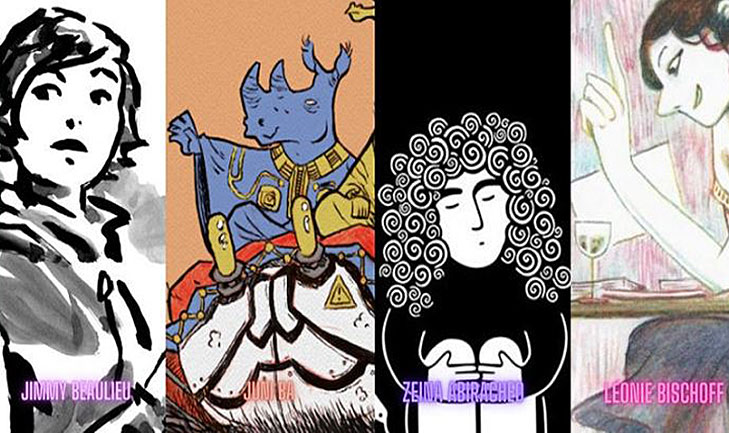 ADD. INFOS: A link to the event will be sent to registered guests. The event will also be live streamed on the embassy of France’s social medias.

The Cultural Services of the French Embassy and La Maison Française are honored to present a roundtable discussion on the theme of Comics and Francophonie moderated by Jean-Paul Gabilliet, Professor at the University of Bordeaux, who specializes in the English-speaking world and comics’ studies and with the participation of:

Zeina Abirached was born in Beirut, Lebanon. She studied graphic arts in Beirut and later in Paris. She has published several graphic novels such as 8, Rue Youssef Semaani, Mourir, Partir, Revenir - Le Jeu des Hirondelles and Le Piano Oriental Originally published in French, they have been translated into Dutch, Italian, and Spanish. Her mainly autobiographical works, illustrated in black and white, document her experiences during the Lebanese civil war in the 1980’s.

Juni Ba was born in Senegal and is currently based in Montpellier. After years between different cultures, he decided to channel his influences in his passion for illustration. Juni Ba is a prolific comic creator publishing in French, English and Wolof with about 4 titles to his name so far. Namely, The Unlikely Story of Felix and Macabber (together with Hass Otsmane-Elhaou ), Ndaw, Kayin and Abeni (together with Keenan Kornegay) and Monkey Meat.

Léonie Bischoff was born in Switzerland and is now based in Brussels. Her latest graphic novel, Anaïs Nin, sur la mer des mensonges is a fascinating portrait of the American author published in 2020. The novel has been selected for the 2021 Grand prix de la critique de la Bande Dessinée Québecoise and for the Fauve d’or at the 2021 Festival of Angoûleme. Léonie Bischoff is a member of the Collectif des créatrices de bande dessinée contre le sexisme.

Jimmy Beaulieu was born in Quebec and lives in Canada. He has explored different careers, as a musician, critic for Radio-Canada, animator, exhibition maker, and librarian while editing comics collections such as Mécanique générale and Colosse. He then began publishing his own work with “À la faveur de la nuit” and Comédie sentimentale pornographique in 2009, and more recently such graphic novels as Rôle de composition and De concert with Sophie Bédard, Singeon and Vincent Giard in 2018.

The event is free and open to everyone and will be conducted in English.