Each year in March, the D.C. Francophonie Cultural Festival celebrates the diversity and richness of the French language and Francophone communities around the world.

This year, tune in on https://www.francophonie-dc.org/ to discover the upcoming virtual events!

Since 2001, more than 40 embassies and partners, including the Alliance Française de Washington DC and the Smithsonian Associates, have collaborated each year to present an array of experiences all rooted in the Francophone culture — from Africa, to the Americas, to the Middle East — through concerts, cuisine, films, literary salons, and lectures for all ages.

One of the major objectives of the Francophonie DC festival is to create awareness of the diversity of French language and cultures and to stimulate exchanges with the public.The festival brings together people who not only speak French, but also feel, in one way or another, connected to France and the Francophone community.

For the inauguration of the 2021 Francophonie festival, the French Embassy is honored to host A Conversation with Leïla Slimani, Personal representative of the French president Emmanuel Macron for the Organisation internationale de la Francophonie and writer, presented by Ursula Lindsay, journalist, and literary critic on March 1. Subscribe to the event here! 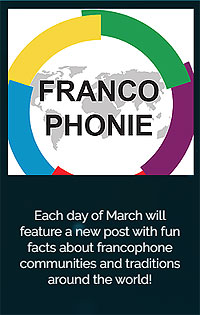 LET’S GET SOCIAL WITH US !

Each day of March will feature a new post with fun facts about Francophonie communities and traditions around the world on Facebook!