Published on April 1, 2021
Investors trust France as a place to set up business

Business France just published its “Annual Report 2020: Foreign investment in France”. Despite the context of health uncertainty weighing heavily on the global economy, and a sharp decline in investments due to the Covid-19 pandemic, foreign investors trust France as a place to set up business.

France attracted 1,215 new foreign investment decisions in 2020, a -17% decline on 2019, versus -33% worldwide. The crisis interrupted the positive momentum of 2019 but has not challenged the attractiveness of France as an investment location.

Jobs created or maintained by foreign subsidiary investments were also down by 13% since last year. The shock was nevertheless softer on the creation of employment, as with 34,567 jobs, 2020 was the second best year in the last decade.

With the health crisis, the uncertainty is palpable, however, there is renewed confidence in France as an investment location, with 90% of the executives of foreign businesses set up in France drawing a positive impression of their investment in France, according to the Business France/Kantar survey on France’s attractiveness. Moreover, nearly nine in 10 chief executives (85%) believe that France is an attractive foreign investment destination.

The crisis did not affect investment type, with decisions involving new creations in France remaining in the majority, with 52% of all investments.

One quarter of the projects aimed to establish or expand a production facility and manufacturing activities were the leading contributor to employment, with 12,875 jobs, or 37% of total employment.

A French ecosystem all the more attractive for innovation

R&D activities accounted for 12% of all foreign investment in France in 2020. American firms stood out for their commitment to research and development, accounting for one-quarter of all inward R&D investments and 30% of jobs generated in this area.

Healthcare projects recorded an increase of 40%. Strengthened by investment in renewable energies, the number of projects in the energy sector was up 13% and the number of jobs generated virtually doubled.

Foreign investments made throughout France’s regions

64% of investors are European

Followed by North America (20%) and Asia (10%). The United States remained the leading investor and source of employment in France. 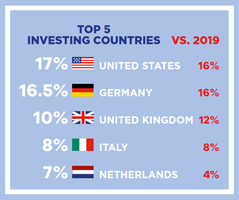 The emergency economic support measures are viewed very positively by 80% of foreign business leaders in their ability to support business activity.

The “National Investment Program” of €11 billion by 2022 to support innovation and investment in technologies of the future, and the reduction of production taxes are the two most relevant measures in the eyes of the executives of foreign businesses established in France.