A woman of action at the heart of American military power 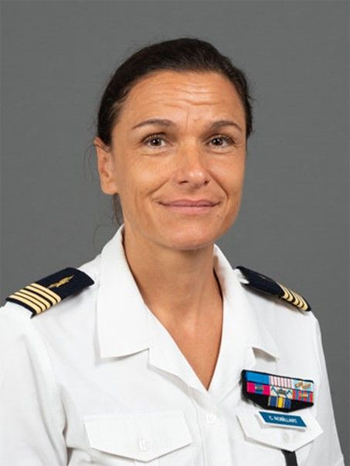 "I want to pass on a message to women: don’t say that things are impossible and don’t impose limits on yourself."

Colonel Robillart, what is your background?

I’ll try to be brief, but my career path has been very unusual and certainly not linear. Even though I thought of joining the army when I was still in high school, I began by studying law in Paris. I started my career at the Ministry of Foreign Affairs’ Monitoring and Emergency Unit. I therefore had the opportunity to take part in a mission to Albania during the war in Kosovo. This mission of more than seven months was an eye-opening experience for me. After being in constant contact with military personnel, it became clear to me that I wanted to join the military. I therefore did my military service in the army, then joined the air force as a graduate recruit in the Ecole de l’Air (Air Force Training School). I specialized in intelligence during my officer training at the Salon de Provence air base. My first assignment was to the fighter squadron at Dijon Air Base, where I briefed pilots on air and ground threats before they started their missions. I then worked for the Directorate of Military Intelligence; I worked with major French groups on issues relating to economic intelligence and security problems abroad. I was then posted to the Ministry of Defense led by Hervé Morin. I prepared documentation relating to international relations. I then passed the Ecole de Guerre (War College) competitive examination. I continued my career in international relations in the space field. I continued to broaden my expertise at the Operations Planning and Conduct Center (CPCO) where I was responsible for Africa. My last post before coming to Washington was Military Assistant to General De Saint-Quentin, Head of Operations for the Army Chief of Staff.

Since June, I have served as liaison officer to the U.S. chiefs of staff. I am responsible for liaising between France and the U.S. in the field of operations. I help facilitate military cooperation.

What’s it like being a woman in the army?

It remains difficult and I feel that I always have to prove myself. The institution is still very traditional, and you have to continuously assert yourself. In fact, I would like to convey a message about the role of women. You really have to have the courage to assert yourself, to assume your rightful place, both literally and figuratively: If there aren’t enough chairs around the table, don’t be afraid to sit down. And more importantly, you should never say to yourself that things are impossible and you should not limit yourself.

How do you maintain your work-life balance?

When you have certain responsibilities, there’s no choice but to be efficient. I have always tried, as far as possible, to leave work at a reasonable time to spend time with my three children. That teaches you to always get straight to the point.

What is your favorite professional memory?

There are too may. I have been fortunate enough to experience some truly exceptional moments.

In the army, you really have an opportunity to experience extraordinary things: operations, parachute jumps during overseas missions, flights aboard fighter jets, low altitude helicopter flights over Mali, watching a satellite launch at the Guiana Space Center in Kourou, French Guiana. But the most recent example was a few months ago when I was invited to a meeting at the office of the Chief of Staff of the U.S. Army at the Pentagon to discuss issues that I can’t tell you anything about!

You studied at IHEE. How did that impact you?

I had a wonderful experience at IHEE which allowed me to learn about a wide range of jobs and careers. Just after my year at IHEE, while attending the Ecole de Guerre I had the opportunity to organize some events in collaboration with some fellow IHEE graduates. I also served as deputy president of the alumni association for a year. I am still in regular contact with IHEE and its alumni and it is invaluable.