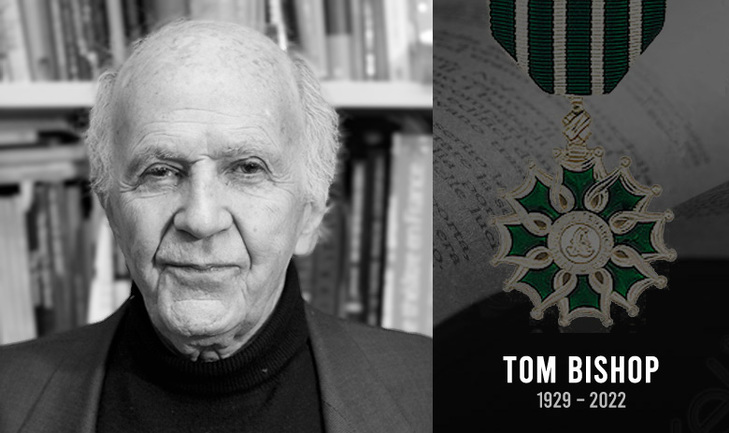 Tom Bishop passed away on January 2. His legacy in our “Sister Republics” is immense, his intellectual itinerary a cartography of the myriad pathways of exchange, comity, debate, and friendship between France and the United States.

Twice a refugee from the Nazi onslaught, first in Paris then in New York, he transformed transatlantic exile and the acquisition of two new languages and cultures into a French-American Enlightenment, presiding from New York University over the delicate weaving together of our two cultures at a time when events from Berlin to Paris and Hanoi tested the bonds and the common values of our two countries.

Tom Bishop’s Republic of Humanities was one of ideas, concepts, and models that traveled under the patient gaze of a translator, an interpreter, and a builder of bridges across the Atlantic. No one in Paris was better at explaining the United States to the French, at teasing out the subtleties and nuances of American culture, its passion for the Common Man and for democracy; no one in New York could make better sense for Americans of our Gallic quirks and enthusiasms, our revolts and our love affairs with philosophy, revolution, and the French language.

The Republic of Humanities had two seats: the Department of French Literature, Thought and Culture at New York University and the New York University Center in Paris. Both of these institutions served as precursors whose models were imitated many times, proving the visionary insight of Tom Bishop for transcultural conversations between France and the United States. The debt French and Francophone Studies in the US owe to the founder of both centers is only equaled by the debt of American Studies in France.

Yet his legacy lives on, and the bridge from New York to Paris rests on solid pillars, supported by the hundreds of students, scholars, and writers who crossed the Atlantic on Tom Bishop’s invitation, girded by his constant challenge to find new ways of reinventing our common bonds and to overcome the distractions of current events.

So today, France pays final tribute to a towering figure of international scholarship, confident that Tom Bishop’s life’s work and values will continue to guide France and the United States through many more decades of mutual understanding and dialogue.