Bastille Day at the Residence of France 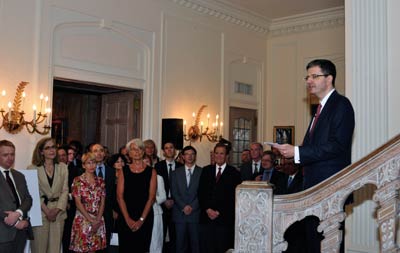 Ladies and Gentlemen,May I please request your attention for the national anthems.

It is a great pleasure and privilege to welcome you this evening to the French Residence for this very special occasion, as we are celebrating together Bastille Day.

I would like to recognize among all the distinguished guests who are here tonight :

the Honorable Justice Ruth Bader Ginsburg, a true friend of France whose presence honors us all;

the new Managing Director of the IMF, Mrs. Christine Lagarde, who assumed her new duties only one week ago after serving as French Finance Minister.

It is a privilege for me and for all of us to have you join us here tonight. So a warm welcome to Washington and we wish you a great success in your crucial new position.

I would also like to say a particular word of welcome to the Senators and Congressmen who are with us this evening as well as to Deputy Secretary William Lynn.

May I extend my warmest thanks and appreciation to the French companies which are supporting today’s event :

first of all Total, represented tonight by its Chairman and CEO Christophe de Margerie, whom I am very pleased to welcome to the Residence. Total is the first market capitalisation in the Eurozone and is rapidly expanding its activities in the United States;

our warmest thanks also to SANOFI – the leading French pharmaceutical company, which also has become a major player in the United States – and to Moët et Chandon – whose Champagne you are drinking tonight.

I would also like to thank Lieutenant-Colonel Jouannic and the French Foreign Legion, the famous “Légion étrangère”, whose commanding general has sent wonderful wine for our celebration tonight. Un grand merci mon Colonel.

Ladies and gentlemen, Bastille Day is the French National Day, but it’s actually more than that.

Let’s never forget that France and the United States owe each other their very existence as free nations; and that from La Fayette and Yorktown to the battlefields of World War I and the beaches of Normandy, our two countries have always stood shoulder to shoulder to defend and promote the values of freedom and democracy that we together gave the world more than 200 years ago – you recognize here the traditional and well-known French modesty.

In the same spirit, the organization “The French Will Never Forget”, devoted to promoting French-American friendship, is planning a major event in Paris on September 11 to commemorate the tenth anniversary of the tragedy of nine eleven.

The event will feature a scale reproduction of both World Trade Center Towers on the Trocadero Esplanade, which we also call “Esplanade of Human Rights”, just in front of the Eiffel Tower.

Each of the towers will measure the equivalent of a 10-story building. The scaffolding covers of the first Tower will list all the names of the victims of the attacks.

On the second tower will be the signatures and messages of thousands of people around the world who will be given the opportunity to associate their name with the event in the preceding weeks.

Tens of thousands of participants are expected to attend this unprecedented event that the Embassy is actively supporting. I believe it will convey a very moving message of sympathy and friendship from France to America.

In line with these shared values, I have good news tonight : French-American relations have never been closer than today.

On the diplomatic and security front, our two countries are fighting together in the skies of Libya and the mountains of Afghanistan.

France and the US are each other’s closest allies in the fight against terrorism. Our two countries have taken the lead to prevent Iran from becoming a nuclear-weapons state.

They are in the forefront of international efforts to support the democratic movements in the Arab World, as was illustrated by the G8 summit that took place in Deauville, France, at the end of May.

And as France is currently chairing the G8 but also the G20, we are working very closely together to manage the global economic situation and reduce macro-economic imbalances in particular.

The U.S. is the number one foreign investor in France, and American investment in my country increased by more than 30% last year.

In the context of growing competition from the emerging countries in particular, innovation is in France priority number one, number two and number three. That’s why we have put in place 71 competitive clusters that offer companies, universities and public research centers the resources to develop collaborative R&D projects.

In the same veine, France has established the highest R&D tax credit in the industrialized world.

And through the “investment for the future program”, France is investing 50 billion dollars in a period of two years in research and higher education. It means many new opportunities for French-American partnerships in this domain.

That priority for innovation translates here at the Embassy into support for increasing university and scientific exchanges.

And promoting these exchanges is one of my top priorities as Ambassador in this great country.

Innovation goes hand in hand with booming entrepreneurship in France. Over the last year, we started in my country 650,000 new businesses. This is a spectacular increase compared to previous years, and this is a record high in France and in Europe. It says a lot about the vitality of French economy and it reminds us that after all “entrepreneur” is a French word.

Ladies and gentlemen, French-American partnership rests on common interests but is also solidly anchored in the values that we share and that we are celebrating today on Bastille Day.

And these shared values remain today our best tool, our best compass, to confront together the current challenges we face. So let me conclude on this positive note and in French :