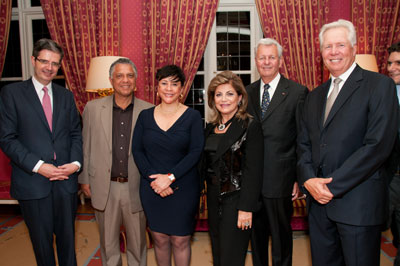 It is a special pleasure for me to welcome you all tonight to the French Residence for this celebration of partnership.

It is special, because this evening, we are not having yet another event to celebrate French-American friendship, or to talk about international politics or the economic situation.

Tonight, it is about crafting support for policies that will improve real human lives in the developing world: we’re talking about women, children and men, confronted with infectious diseases in the world most vulnerable countries.

And tonight, it is about how we, as policy makers, businessmen, physicians, NGO activists, or simply as individuals, can do some good about that.

And it’s heartening to see such a distinguished crowd gathered for this noble cause, including prominent figures of both sides of the United States’politics mobilized on this crucial issue.

I want to recognize the organizers of this reception and our distinguished speakers tonight :

Hank McKinnel, former Chairman and CEO of Pfizer and Chairman of the Board of Accordia.

Dr Alex Coutinho, Director of the Infections Diseases Institute at Makerere University in Uganda, who devoted his life to the fight against HIV/AIDS in Africa.

Dr Warner Greene, founding director of the Gladstone Institute of Virology and Immunology.

You will not be surprised if I tell you that improving Global Health is a top priority on France’s foreign assistance agenda.

with 1,4 Billion Euros - 2 billion dollars - for the triennium 2011-2013, France remains the second largest donor to the Global Fund to fight HIV/AIDS, malaria and tuberculosis, preceded only by the United States.

May I seize this opportnunity to pay tribute to the action of the Fund’s President, Michel Kazatchkine, a fellow Frenchman, who has done an amazing job at enhancing the Fund’s financial resources, reforming its policies towards a comprehensive vision of health, confronting corruption, and modernizing management.

France is also committed to the success of other multilateral initiatives such as GAVI and UNITAID.

We also actively support the Roll Back Malaria initiative, and we are pushing hard internationally to fight the traffic of fake medicines. We just had a meeting in Cotonou with ECOWAS states to finalize a regional action-plan against this dreadful plague.

Indeed, the main focus of our foreign assistance is Sub-Saharan Africa: there lay the main challenges and potential progress – demographics, health, poverty reduction and economic growth.

This effort, which places France alongside the United States as a major contributor to Global Health, has only been possible with the personal commitment of President Sarkozy and the discrete but very tenacious and efficient inspiration of his spouse, Carla Bruni-Sarkozy.

Now, to achieve this goal of improving global health, governmental action, though necessary, will clearly not be sufficient.

What we need is a commitment of corporations and non profit actors, whose unique set of financial resources and technical expertise can, and must, have a multiplier effect on the ground, in the framework of country-driven strategies.

This is where a foundation like Accordia can make – and is actually making – a huge difference.

This is also why I am proud, as the French Ambassador to the U.S., to see the growing partnership between Accordia and Fondation Mérieux which is a major French foundation in the health domain. Their joint initiative of developing French language laboratory training courses for French speaking Africa is a much needed and much welcomed development.

This partnership between Accordia and Foundation Merieux is based on a shared commitment to strengthen local capacities in Africa and will help reduce the impact of infectious diseases on vulnerable populations.

The fight against infectious diseases is a long journey that probably just started. We’re not yet where we need to be if we are to achieve by 2015 the Millenium Development Goals 4, 5 and 6 that both our countries embraced.

But it is thanks to the vision and commitment of actors like you that, on the ground, every day and hour, doctors and medical personnel can strive to save precious human lives.

So my warmest thanks to each and everyone of you./. 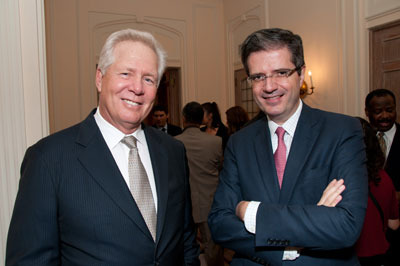