The Unveiling of the Statue of Liberty 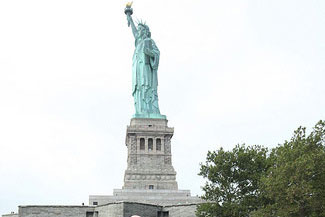 It is a great pleasure for the French Consul General in New York and for me to be here with you this morning for this very special ceremony as we approach the 125th anniversary of the Statue of Liberty.

I would firstly like to pay tribute to Leonard Stern, whose passion for this historic monument has given us the opportunity to come together in order to celebrate French-American friendship and our shared history and values.

On behalf of my country as well as personally, I want to express my warmest thanks to Leonard Stern for his dedication and commitment to Lady Liberty and what she means to us all.

By giving the Statue of Liberty to its American ally, France was offering its most precious possession : the ideal of liberty that is central to the Enlightenment and the French as well as the American Revolution.

The Statue testifies, as President Sarkozy reaffirmed alongside Mayor Bloomberg three weeks ago, to the deep and lasting ties of friendship between our two peoples. Lady Liberty is an iconic symbol of Franco-American friendship.

It reminds us that our two countries owe each other their very existence as free Nations and that from La Fayette and Yorktown to the battlefields of World War I and the beaches of Normandy, and today in the skies of Libya and the mountains of Afghanistan, our two countries have always stood shoulder to shoulder to defend and promote the values of freedom and democracy that we together gave the world more than 200 years ago.

It’s in times of difficulty that America and France have always given the most powerful expression to the bond that unites them. And if I am here today as the representative of a proud and free country, it is thanks to these young Americans who came twice to France to restore our freedom. We will never forget their commitment and their sacrifice.

Over time, this symbol of French-American friendship took on a universal meaning that reflected the seven points of Lady Liberty’s crown, representing the seven continents and the seven seas, and the broken chain of bondage that lays at her feet. For millions of immigrants arriving in New York - after grueling ocean crossings, this statue was a message of deliverance as much as a message of welcome.

Visible to all, at the entrance to New York Harbor, it is a symbol of hope for millions of immigrants, a harbinger of the end of a journey and the beginning of a dream—the American dream.

This dream was also your dream, dear Leonard Stern, and that of your family when it arrived in the United States. Passing the Statue of Liberty in New York harbor, your father Max used this phrase which sums up it well : “Now I am going to be free and I can do what I want.”

For me it also bears witness to your affection for my country and your love of its culture. This is reflected by the countless works of art that you collect, starting with the magnificent Gobelins tapestry that adorns the entrance of this building. Once again, through yourself and the history of your family, America and France are inextricably linked.

We can’t talk about freedom in New York, without mentioning the tragedy of September 11. A tragedy which I remember vividly as I was in Washington, DC then and as it was my son’s first day of school. On the evening of September 11, 2001, “we were all Americans.” Because in striking at the heart of America, the terrorists also wounded all French citizens and all those who identify with the values of freedom and democracy.

Ten years later, we are once again all Americans. We have just commemorated the 10th anniversary of those heinous attacks and it should come as no surprise that the largest commemoration of 9/11 ever organized outside of the U.S. took place in Paris, just in front of the Eiffel Tower. In Washington we were honored my wife and I to have attended the commemoration with a dear American friend who lost her husband in this tragedy and inaugurated the ceremonies with President Obama.

This 10th anniversary also gives us reasons to hope. Contrary to what they sought, the terrorists did not manage to pit the Western world against the Muslim world. Despite the fear and the violence of the shock, our societies have remained open and true to their values. It is said that on that day, America lost its innocence. But what all our democracies gained was the conviction that they did not have the right to be weak. History has proven us right.

George Washington once said: “Liberty, when it begins to take root, is a plant of rapid growth.” Each day, more people clamor for it. In Africa, in Tunisia, Egypt, Libya, Syria, Yemen, in Iran too and in every part of the world, millions of people are rising up to demand freedom and democracy.

And here again it should come as no surprise that our two countries are in the forefront of international efforts to support and promote the democratic movements in the world and in the Arab World in particular.

Because freedom lies at the very heart of our respective identities and our friendship, our two countries must be the first to respond to the appeal of these people. And in doing so, we are true to the message and the heritage of Lady Liberty.

In Libya in particular, Americans and French can be proud to be on the side of those who broke the chains of 42 years of dictatorship. We must continue to stand by their side.

Ladies and Gentlemen, let’s never forget that the values embodied by Lady Liberty, these values that we share, remain in today’s world, more than ever, our best tool, our best moral compass to confront together the current challenges we face.