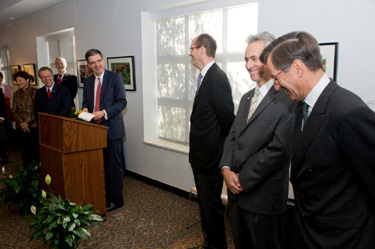 Dear President Peterson, Président of the Georgia Institute of Technology,

It is a great pleasure and a true privilege for me to be here with you today, in such a prestigious university, together with so many eminent guests, to honor three exceptional professionals and contributors to the French-American friendship: Dr. Steven McLaughlin, Dr. Yves Berthelot and Mr. Bernard Anquez.

Before I proceed with the ceremony, I would like to pay tribute to our hosting institution today, and recognize Georgia Tech’s impressive performance as a major university in the United States : not only is this university’s role in education key to future generations of students, from this country and abroad, but Georgia Tech’s economic impact, particularly in the American Southeast, is also a crucial force.

Georgia Tech has been one of the first American universities to understand that international cooperation in science and higher education is an essential part of educating students in the 21st century. President Peterson, I would like to commend you on reinforcing this strategic choice, and for promoting the university’s development abroad.

Relations between France and Georgia Tech, in particular, have reached a remarkably high level of cooperation, and both Dr. McLaughlin and Dr. Berthelot have been among the main architects of this very special partnership.

From 1992 to 1996, you were part of the electrical engineering faculty at the Rochester Institute of Technology. In September 1996, you joined the School of Electrical and Computer Engineering at Georgia Tech, where you are now Vice Provost for International Initiatives, and Professor.

Your academic and research activities, which are specialized in the area of communications and information theory, are indeed very impressive. In this domain, you hold 30 American patents and you have a dozen more pending. You have published more than 240 papers in journals and conferences. You have served as the research and thesis advisor to more than 50 students at the bachelors, masters, doctoral and post-doctoral levels.

As Vice Provost for international initiatives at Georgia Tech, you are responsible for Georgia Tech’s global engagement and your are at the crossroads of all new international activities in research, education, and economic development.

You are also a co-founder of Whisper Communications, a physical-layer security company established in 2009 to commercialize technologies developed in your research group. Previously, you were Deputy Director of Georgia Tech-Lorraine - the French Campus of Georgia Tech in Metz, in 2006 and 2007.

Among the many Awards you’ve already received, you were the first Georgia Tech recipient of the Presidential Early Career Award for Scientists and Engineers (PECASE).", and you also received several National Science Foundation awards.

In all your capacities, you demonstrate excellence, high efficiency and dedication. Your vision of the international future of Georgia Tech, from Metz to Shanghai, has inspired the leaders of the University and led to many solid long term projects which are strategic to Georgia Tech’s future. Your patience, your diplomatic abilities and your deep understanding of other cultures are some of the keys to your success.

You contributed to solidify the exceptional partnership between Georgia Tech and Lorraine, leading this transatlantic cooperation to what it is today: an excellent framework for a fast growing flow of student exchanges. The opportunity for many teaching collaborations in various fields of science, with some dual degrees that have already been delivered. And a favourable environment for joint research in many areas of physics and engineering.

Thanks to your efforts, Georgia Tech Lorraine is an outstanding achievement and a very successful long-term partnership between France and the United States.

You are the other Master Builder of Georgia tech Lorraine’s success.

Upon entering the University of Technology of Compiègne in France to study engineering, your passion for music and desire to combine your interests led you to specialize in acoustics, sound, and ultrasound in physics.

After receiving your engineering degree in 1981 at the University of Compiègne, guided by your open-mindedness and willingness to explore new horizons, you decided to complete a Masters of Science in Southampton in 1982, and a Ph.D. in 1985 from the University of Texas in Austin. You joined the faculty of Georgia Tech in 1985, as a researcher and assistant professor.

You are now an accomplished researcher and professor in mechanical engineering. Your research has been supported by the NSF, NASA, the DOE, Ford and Michelin, among others. You hold two patents and have published extensively in referred journals. You have also received numerous awards: the Award for “Presidential Young Investigator” from the NSF; the Gold Medal of the American Society of Mechanical Engineers, and in 1991, you won the Lindsay Award from the American Society of Acoustics.

You are also fully invested in your projects as Vice-Provost of Georgia Tech and as the President of Georgia Tech-Lorraine. In 2005, you took over leadership of the campus in France and, since then, you have concentrated your efforts on developing students exchanges: each year now, more than 500 American and Foreign students go to France and enrich their experiences.

You made it more than just an exchange program: Georgia Tech Lorraine is a partnership of higher education and research that offers great economic opportunities. You train engineers to understand the global challenge.

However, that was not enough for you. In an effort to reinforce Franco-American relations in the South-eastern United States, you wanted to bring the partnership between Georgia Tech and France to a higher level and create a model for transatlantic cooperation in technology transfer and innovation.

For the past several years, you have not spared any effort to convince the European Commission, the French Government, and local Authorities in Metz, Moselle and Lorraine to launch, together with Georgia Tech, the Lafayette Institute. This institute, to be based in Metz, will help technology transfers and new start-ups in the optoelectronic sector. This is a remarkable achievement!

Your determination, your diplomatic talents and your success in bringing all these people together, produced such an exceptional result, so important for the future of the scientific and economic relations between France and the United States. I wish a long life and great success to the Lafayette Institute!

You are also a key figure in the French American relations. It has been said –and I certainly believe it- I quote that “between France and the United States, there is an ocean. There is also Bernard Anquez”. As Vice President of Air France-KLM and Air France KLM Group Representative at Delta Air Lines, you are indeed one of those people who, day by day, work to enrich the relationship between our two countries.

First, you completed a brilliant academic career, graduating in 1975, from both La Sorbonne and les Ponts et Chaussées, one of the best French Schools of engineering. You then left for the United States where you went to Stanford University to complete a Masters of Science in transportation planning.

From 1979 till 1987, you pursued a very successful career at Air France, during which you travelled across the world, from Colombia to Japan. Next, you expanded your professional horizons when you were sent to Madrid to help create Amadeus, a reservation and transaction processor for the global travel and tourism industry. In this position, you contributed to a new global travel distribution system, which would eventually become a world reference, one of the jewels of modern technology.

Coming back to Air France in 1994, you held several important positions related to the activities of the company in Asia, before taking the post of Deputy Director General for Asia Pacific.

In 1999, you were appointed Director General of Air France in Japan, where you worked very hard to increase the night flights frequency between Tokyo and Paris, strengthening the image of the airline as the best business link between Japan and Europe.

During your stay in Tokyo, you also got deeply involved in the local business community. You became President of the French Chamber of Commerce and member of the French Trade Advisors, contributing further to the enhancement of the French Japanese relationship.

After serving as Director General of Air France in Great Britain and Ireland, you were appointed as Representative of the Air France KLM group to Delta Air Lines, here in Atlanta in 2005.

“Facilitator” of exchanges between the two companies, you make the link between two cultures that work very well and very closely together.

Two and a half years ago, a joint venture agreement between Air France-KLM and Delta Air Lines was signed, in the context of the liberalization of air traffic between the EU and the US. The joint venture crowned the collaboration between Air France-KLM and Delta, making this relationship not only crucial for both companies, but also a model of development for transatlantic flights.

Your role has been and still is instrumental in the birth, the building and the strengthening of this joint venture. You are one of the key players in this partnership and in the air transportation Industry more broadly, based on your exceptional talent in economic diplomacy in particular. So your promotion, in October 2010, as Vice-President of Air France-KLM was a natural consequence of all this.

You make sure that Delta Air France-KLM supports the development and the vitality of the French American relations in this region. Thank you very much for your important action in this regard.

In recognition of your great achievements and tireless efforts to strengthen the cooperation between France and the United States, the president of the French Republic Nicolas Sarkozy has decided to award you the national Order of Merit, with the rank of Knight. It is now my privilege to present you with the Award.