Opening of the French-American Global Forum

Published on December 1, 2011
Speech by François Delattre, Ambassador of France to the United States 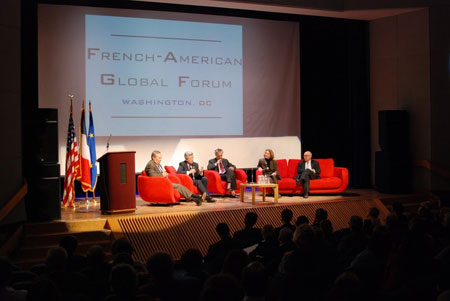 It’s a great pleasure and honor to welcome you all tonight to the Maison française for the inaugural event of the “French-American Global Forum”.

I would like to express my warmest thanks to our panelists who will discuss “the G20 and the New Global Order”: Ambassador Jean-David Levitte, Diplomatic Advisor and Sherpa to President Nicolas Sarkozy - and former Ambassador to the United States as you all know - who has come especially from Paris to be with us this evening;

Mr. Lawrence Summers, President Emeritus of Harvard University and former Secretary of the Treasury, to whom I’d like to say a very special word of thanks;

Mr. Kermal Dervis, Vice-President of the Brookings Institution and former Minister of Economic Affairs of Turkey;

Today’s event marks the launch of the “French-American Global Forum”, whose mission is to bring together academics and experts from our two countries and beyond to hold regular and quite large events on current political and economic affairs.

Here I want to commend Romuald Sciora for taking this great initiative. Romuald Sciora is one of the most brilliant representatives of the new generation of intellectuals committed to the world stage.

He is a well-known writer and filmmaker and produced more than a dozen political documentaries, including a TV series, devoted to the United Nations.

The launch of this forum could not come at a better time as French-American relations, and this is good news, have never been closer than they are today.

To focus only on the diplomatic and national-security front, our two countries fight together in the mountains of Afghanistan – and until a few weeks ago in the skies over Libya, where we prevailed against Kadhafi and his affiliates and put an end to 42 years of dictatorship.

Our 2 countries are each other’s closest ally in the fight against terrorism. We have taken the lead to combat the proliferation of weapons of mass destruction and to prevent Iran from becoming a nuclear-weapons state in particular.

We are in the forefront of international efforts to support the democratic’s movements in the Arab world.

And we are working very closely together, under the French chairmanship of the G8 and the G20, to bring a coordinated response to the economic crisis in association with the emerging powers in order to restore confidence and to promote financial stability as well as economic growth.

And let’s never forget, as we open this new forum, that the values that we share, the values of freedom and democracy coming from the French and American revolutions, are what makes our relationship truly unique.

And these values are more than ever our best tool, our best moral compass, to confront together the current challenges we face./.