Published on November 20, 2011
Speech by François Delattre, Ambassador of France to the united States 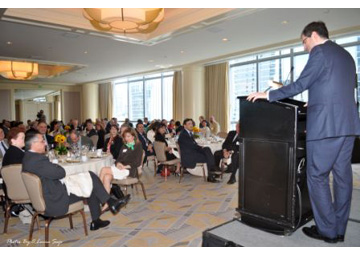 It is a great pleasure for our Consul General in Miami Gael de Maisonneuve, for Invest in France Agency Philippe Yvergniaux, for the Embassy Economic Counsellor Anne Hélène Roignan, and for myself, to be here with you today.

I would like to thank the French American Chamber of Commerce, and its President Christophe Maincourt for this wonderful lunch, with its French flair, and I appreciate the dynamism of all our partners, during this very special week designed to enlighten the French presence in Florida.

Thanks to all of you, active members of the French-American Chamber of Commerce and committed players of the business community here in Miami and Florida : you are making the French presence in this wonderful region more vibrant every year.

I believe it is important to remember that the values we share are at the core of the French-American relations. They are what makes our relationship truly unique. Our two countries owe each other their very existence as free Nations. From Lafayette and Yorktown to the battlefields of World War I and the beaches of Normandy, our two countries have always stood shoulder to shoulder to defend and promote the values of freedom and democracy.

Against this rich and deep historical background, it is my belief that French-American relations have never been closer than they are today.

On the diplomatic and security front, our two countries are fighting together in the mountains of Afghanistan. In the skies of Libya, we prevailed against Gadhafi and his affiliates and brought 42 years of dictatorship to an end. We are each other’s closest ally in the fight against terrorism.

We are at the forefront of international efforts to support the democratic movements in the Arab world and to fight the risk of proliferation of weapons of mass destruction. Together, we are taking the lead to prevent Iran from becoming a nuclear weapon state by tightening sanctions against its regime.

We are also working very closely together, in the framework of the G8 and G20, to bring a coordinated response to the economic crisis in order to restore confidence and to promote financial stability and economic growth.

This strategic and political partnership is echoed in the ever stronger economic relationship between our two countries.

As French Ambassador to the USA, I would like to lay down a few facts about my country’s economic assets.

First, let’s rely on data, France is a leading player in the world economy. With 65 millions inhabitants, my country is the fifth largest economy in the world and the second largest in Europe. It is the fourth largest recipient of FDI and the leading tourist destination in the world.

My country has also a strong, diversified industrial base, powered notably by:

the largest pharmaceutical, aerospace, nuclear and agri-food sectors in Europe;

and its third largest ICT sector.

Second, this successful path comes from the fact that my country has chosen to build, year after year, a business friendly environment and to fast track its knowledge economy.

France’s decisions to consolidate its innovation clusters, reform its universities and reaffirm its commitment to the research tax credit, all serve the same purpose: to strengthen the competitiveness of businesses in France and to stimulate innovation in strategic sectors. Innovation is the top priority in my country and fosters a booming entrepreneurship.

By doing so, France is conforming to the expectations of international investors seeking outstanding locations in Europe, providing them with a skilled, productive and flexible workforce, efficient infrastructures and government services, and a market with a strong demographic at the heart of Europe.

Third, and this is undoubtedly, to me, a great asset, the economic partnership between France and the US has never been so intense and efficient.

The US is the first client and the second provider of goods for France, outside of the EU. In 2010, nearly 50 billion worth of goods were exchanged between our two countries and these trade flows have increased during the 1st semester of 2011.

But the backbone of this sturdy economic relationship is, of course, cross-investment. The US is the number one foreign investor in France and American investment in my country increased by more than 30% last year. There are 4 200 American companies in France, employing 750 000 workers.

Conversely, my country is the 7th largest investor in the US, with a stock of more than 170 billion dollars, and the US is the 1st destination of French foreign investment outside of the EU. 4000 French companies are operating in the US, creating 600,000 American jobs, of which 20 000 are located in Florida alone.

And when it comes to France and Florida, there are also, no doubt about that, so many things to be proud of! Your State and my country cleary give the priority to innovation.

More than 180 French firms operate in Florida for a total investment of 900 million USD, employing 20 000 workers.

These impressive figures reflect the long standing presence on traditional market segments such as tourism or luxury goods. French firms have always understood the strategic location of Florida, as a gateway to Caribbean and Latin-American markets. But today, innovative technologies and the need for green products offer new opportunities for the French know-how to flourish and contribute to sustainable development.

Let me acknowledge three success stories between France and Florida:

First, the recent opening by Saft of the most technology advanced batteries plant illustrates the great cooperation between the public and the private sector. This is just the perfect match between, on one side, a French leader in renewable energy and smart grids and, on the other side, public policies, at federal, state and municipal levels, designed to welcome and attract foreign investment.

Second, the successful bid by a consortium led by Bouygues to dig and build the Port of Miami Tunnel. This project will allow Miami to take advantage of the opportunities created by the Panama Canal expansion and preserve the strategic role of the Port of Miami in the regional economic activity. I have just visited the project site this morning and this is really impressive! I am proud to see that French technologies and savoir-faire help Florida maintain its role as a hub in our globalized world.

Third, let me underline the role of the aviation industry in building strong ties between Florida and my country. The acquisition of Barfield, a repair facility for Airbus and Boeing, by Sabena Technics in 2007, offers a vivid symbol of a successful cooperation between French and American firms. Barfield benefited from the renowned technical expertise of the French group while, in the meantime, Sabena Technics got access to the biggest market in aviation maintenance. This success story reminds us of the huge potential of cooperation between small and medium enterprises on both side of the Ocean. And be certain that French SMEs have definitely made the bold choice to export.

Surely, Florida also is investing in France: more than 80 companies from Florida operate in my country. The trade relations are, too, vibrant: France is the 6th provider of Florida and France bought for more than 540 million USD of goods in 2008.

I could speak for hours about the French American economic partnership but let’s turn now to an extremely accute and sensitive issues. Let me give you, in three points, my reading of what is going on in Europe, and in particular in the Euro area at the moment.

The first point is Europe’s firm stance towards Greece, which led to a crucial collective realization of the challenges for this country’s future. Today, the case of Greece could be considered as pretty much tackled after the package decided on the 26 of October by the European Council. The new government under Loukas Papademos, former ECB vice governor and renowned economist, is credibly committed to implement the measures decided jointly by the EU and the IMF.

The second point is that the confidence crisis has shifted from Greece to other European countries, which are fundamentally different.

Seen from the United States, what happens in Europe may sometimes look messy. Markets and media tend to see the Eurozone crisis like a series of troubled countries, each larger than the former, having to be rescued by their peers with no end in sight. Portugal after Greece, Ireland after Portugal… because of past fiscal mismanagement.

The reality is more complex. The story is one of contagion from countries facing real difficulties to stabilize their debt and regain competitiveness, to countries which were and still are fundamentally sound. Think of Spain as a country with a balanced budget amendment in its Constitution, a debt half that of the US, in percentage of its GDP. Think of Italy as a country which has been running large primary surpluses for years, precisely because it is heavily indebted. Why should these countries suddenly become the focus of the markets and their debt implicitly considered highly risky?

The reason is that markets, after the first signs of crisis in Greece, woke up after years of blindness about the reality of the Eurozone: they had pretended to ignore that Greece and Germany where not a single homogenous country; they suddenly demanded that we act quickly to give them simple answers about which taxpayer would, in last resort, be asked to pay for the debt of this or that taxpayer in the neighboring country.

This is the reason why France has decided to deepen its fiscal convergence with Germany. New measures are about to be adopted, in my country, in this sense, for 2012.

Ultimately, and this is my third point, this is all about convergence and governance within the European Union. And France and Germany have taken the lead.

In any case, we will do whatever it takes to save Europe and the Euro. This resolution has been reiterated by Chancellor Merkel and President Sarkozy. And, make no mistake, there is strong popular support in both countries for going ahead.

Because Europe is the most inspiring project ever imagined by man in the service of peace. One that is deeply rooted in the darkest hours of European history, namely WWII and the Holocaust – a promise of redemption for our continent. We simply cannot let this existential project fall apart.

Immediate action should go together with a renewed debate on economic governance in the Eurozone. Because Governance defines the perimeters in which action can be taken or not. Work has been launched on the reform of the Governance of the Eurozone, and is accelerating, under the auspices of France and Germany. Changing the Treaties is no more taboo.

A new Europe is about to emerge. More integrated, it will be stronger and will stand side by side with the US in the coming challenges of the century. French-American partnership is deeply rooted and has never been so profound and intense, in many fields. I firmly believe that this exceptional relationship, the feeling of trust and friendship which links our two Presidents, does help France facing its European challenges.

Thank you very much for your attention.