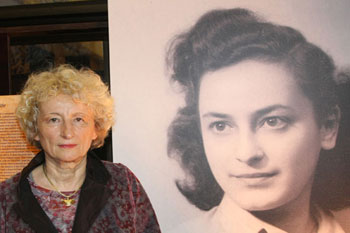 Dear Mr Jacques Fredj, Director of the Mémorial de la Shoah, who has come specially from Paris to attend this event,

Dear Professor Michael Marrus, Professor Emeritus at the University of Toronto, - it’s a privilege to have you with us this evening,

Dear Mariette Job, niece of Hélène Berr, whose presence honours us all – and I will never forget our first encounter in Ottawa a few years ago,

It is a great honor to welcome you all tonight to the Maison Française for the opening of the exhibition “Hélène Berr, A Stolen Life”.

An exceptional exhibition that was designed, created and circulated by the “Mémorial de la Shoah” and made possible by the generous support of the SNCF – May I say a particular word of welcome to SNCF representative Bernard Ensellem.

This evening has a special meaning for all French citizens and certainly for me, as a representative of France in this country.

Tonight is a night to remember. First and foremost, we will remember a young woman, Hélène Berr, whose diary offers us a moving account of her life as a young and smart Parisian girl, from 1942 to the very day of her deportation in 1944.

Chère Mariette Job, we cannot thank you enough for this exceptional – and so moving - document and for your commitment that made all this possible.

Through Hélène’s personal tragic fate, tonight is a night to remember the fate of so many Jews in Europe and in France.

As many of you know, in 1995, President Jacques Chirac officially recognized the responsibility of the French State in the persecutions.

On the date of the Vel d’Hiv raid, the 16th of July, he recalled – and I quote - that “France, the cradle of the Enlightenment and human rights, a land of welcome and asylum—France, on that day, committed the irreparable.

Failing in her word, she delivered those she protected to their executioners.” (endquote)

This major statement is an important milestone in France’s attitude toward the Holocaust and the Vichy regime. In 1990 for example, France passed one of the world’s harshest law’s criminalizing “négationnisme”, the act of Holocaust denial. For decades before that, the French public had been educated about the Holocaust through numerous books and films, and it was taught in the schools.

As early as 1955, Alain Resnais directed “Night and Fog,” and in 1985, Claude Lanzmann directed “Shoah”, a 10-hour documentary that dissected individual responsibility in the perpetration of the Holocaust. More recently, “La Rafle,” which recounts the Vel D’Hiv raid, was a big success in France, with 3 million viewers. France looks at its past honestly.

The same is true for Hélène Berr’s diary, whose first edition of 24,000 copies sold out in France within two days. Two days !

Putting things into perspective, I think it’s important to remember that the history of the Jews of France is inseparable from the history of the Republic. And that the Jewish tradition is a key part of the French heritage, a part that we are particularly proud of.

Marc Bloch, one of the great French historians who died at the hands of paramilitary forces and collaborators said: - I quote -

“Whatever happens, France will remain the homeland from which I will never uproot my heart. I was born there, I drank at the sources of her culture, I made her past my own, I breathe only under her skies, and I have tried to defend her as best I could.” (endquote)

And with Léon Blum, in 1936, it became the first country to have a head of government of Jewish origin.

During the dark days of the Second World War, we owe so much to the many “Righteous Among the Nations” living in France. It is to a large extend thanks to them, as you will see in the documents describing this exhibit, that three-fourth of French Jews living in France were saved from Nazi forces and from the Vichy regime.

France had to come to terms with its difficult past, and it did.

It did through the creation of a Commission to Compensate the Victims of Spoliation (CIVS).

It did through the creation of the Fondation pour la mémoire de la Shoah, which established reparation programs that supplemented those put in place after WWII.

It also did through education, which is a crucial part of our duty to remember. In France, the Mémorial de la Shoah plays of course a particular role in this educational endeavor.

And here I want to express my warmest thanks to the Director of the Mémorial, Jacques Fredj, who made this exhibit available to us and whose personal commitment is exemplary.

Few of you would in fact know that the Mémorial is the successor to the Centre de documentation juive contemporaine, which was created in 1943, during the war, and started operating as early as 1945.

Today, to put it simply, The Mémorial de la Shoah is the largest centre in Europe for research, information and awareness raising on the history of the Second World War Jewish genocide.

2012 marks the 70th anniversary of the departure of the first convoys of Jews deported from France. That makes it a particularly meaningful year. Here in the United States, as in France, we will strive to respect our duty to remember and to reflect, together, on this so painful history.

In addition to this evening’s exhibit, on March 21, Eric de Rothschild, president of the Mémorial de la Shoah, will attend the inauguration of a major exhibit, “Filming The Camps: John Ford, Samuel Fuller, George Stevens, From Hollywood to Nuremberg,” presented at the Museum of Jewish Heritage in New York from March 22 to October 14 and which I invite you all to visit if you are in New York.

I want to conclude by saying that the fight against Holocaust denial and anti-Semitism is a necessary fight, an existential fight for all of us.

The determination of French officials in this regard is absolute. Our legal arsenal in this area is one of the strongest in the world, and our policy is simple: zero tolerance.