It is a great pleasure and privilege for my staff and for me to welcome you tonight to the French Residence for a very special occasion - as we have gathered here this evening to honor our friend Ralph Crosby, an exceptional individual, an outstanding professional and a close and long-time friend of France. 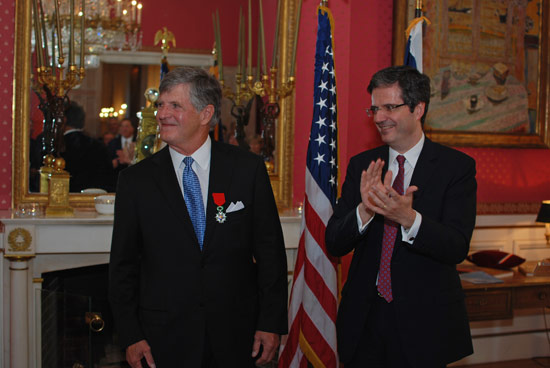 I would like to extend a warm welcome to Ralph’s family and friends who have joined us here tonight to show their support and admiration.

With a very special word of welcome to the members of your family : your wife Mary Grace, to whom I would also like to pay tribute tonight, your daughter Laura Keidel, your son Ralph and his wife and your brother – Major General Tim Crosby.

Dear Ralph, everybody here is familiar with your professional accomplishments as the first President of EADS North America and as a former member of its Executive Committee. But the truth is that your dedication to French-American relations and to the transatlantic alliance is the story of your life. 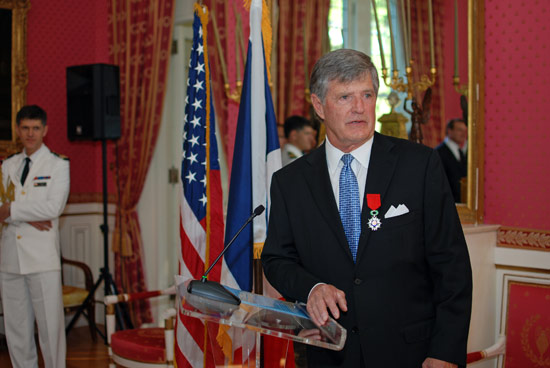 As a military cadet at West Point, you chose an academic course of study that emphasized French, political science and international relations, in addition to the requirements necessary to becoming an Army officer. You were thus selected to spend the summer of 1968 in Paris – not the quietest period! That experience not only improved your knowledge of the French language, which you still speak beautifully, but also brought into clearer focus the need for strong ties between the U.S. and France.

You were then awarded a prestigious scholarship and decided to do your graduate studies at the famous Institute of International Studies in Geneva. This was an opportunity not only to live and study in a French environment but also to deepen your understanding of the unique partnership between the United States and Europe.

Those experiences were especially valuable during the time you served in the U.S. Army as Military Assistant to the Vice President in the Carter Administration, after having served successively in Vietnam, in Germany and in the Pentagon.

They were even more valuable later on in the private sector, where your in-depth understanding of transatlantic relations proved to be a great asset, especially when it came to industrial relations.

In 1981, you entered the Northrop Grumman Corporation, where you held numerous leadership positions. One of the company’s youngest vice presidents, as the head of governmental relations you directed the B-2 bomber program and founded and ran the Integrated Systems division. You were a member of the board of the company from 1996 to 2002.

That year, you became the first President of EADS North America. For 10 years, you focused your activity on bringing the industrial challenges of the U.S. and its European allies — including France — into line.

The first major partnership between EADS and Northrop Grumman was established through the energy and dedication of our friend here whose one of the greatest achievements was the promotion of EADS North America as a key player and a first-class partner on the U.S. market.

I would like to take this opportunity to express my appreciation to the whole team of EADS North America, which is so well represented tonight.

May I acknowledge in particular Sean O’Keefe, Chairman and CEO of EADS North America; and Allan McActor, Chairman of Airbus Americas.

Dear Ralph, under your tenure, EADS North America grew stronger every year and won major contracts, including the one for the U.S. Army Light Utility Helicopter, which is often referred to by the Department of Defense as a model of industrial program management.

You also led the bidding for the next-generation tanker from 2005 to 2011, working closely with the French diplomatic community and other European countries to build up a team that won the first tanker competition in 2008, even if as we know the second competition was lost by a slight margin in 2011.

But this competition helped EADS consolidate both its position and reputation as a top contender in the United States.

We all know that your leadership and ability to forge partnerships helped boost the attractiveness of European defense products in the U.S. and broadened knowledge of European industrial capabilities. We all see that the partnership between the U.S. and Europe in the defense industry is more and more important.

Dear friends, the part Ralph Crosby played in the transatlantic relationship for all these years is absolutely unique, and we appreciate even more the way his intimate knowledge of France forged a strong commitment benefiting both our countries.

Let me mention the U.S.–France bilateral dialogue that EADS launched with the CSIS in 1999. Throughout the years, this dialogue—an event the Embassy has always supported—has allowed prominent policy-makers as well as distinguished scholars from both the United States and France to meet and discuss important issues on the transatlantic agenda.

Dear Ralph, we know France is very much your second homeland. Perhaps the roots of this story can be found in that summer of 1968 when you were a student in Paris and enjoyed strolling along the Seine and going to sidewalk cafés. That was when you met a charming young lady, an American student at the Sorbonne. Two years later, you were married and since then you have woven a common history with France, where you and your wife share so many memories.

Dear friends, the Legion of Honor was created by Napoleon Bonaparte in 1802 to reward extraordinary accomplishments and outstanding services rendered to France, based on a personal decision by the President of the French Republic. It is France’s highest distinction and one of the most coveted in the world.

So tonight in recognition for your exemplary commitment to French-American cooperation and friendship, and on behalf of the President of the French Republic, it is my privilege to bestow upon you the insignia of Chevalier of the Legion of Honor.