Read the article on this ceremony.

It is a great pleasure and a privilege for my staff and myself to welcome you today to the Residence of France to pay tribute to an outstanding general officer of the United States Army, Lieutenant General Ronald Burgess, Jr. 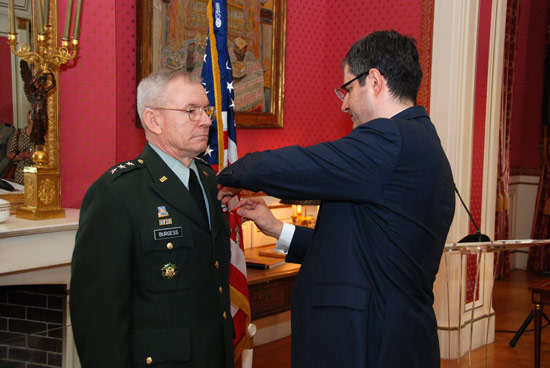 I wish to extend a warm welcome to General Burgess’ family and friends who have joined us to show their support and admiration.

Let me also say that Lieutenant General Didier Bolelli, France’s Director of Military Intelligence, your French counterpart, would have very much liked to be in attendance. Unfortunately, his schedule did not allow him to do so. But I can assure you that he is very much looking forward to attending your retirement ceremony tomorrow at Bolling Air Force Base.

Now, I think a few words on the Legion of Honor, France’s highest National Order, might be of interest to our American guests. 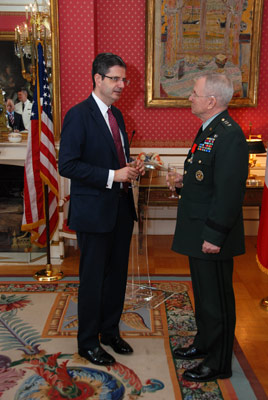 As you might know, the first French Consul, Napoleon Bonaparte, created the Legion of Honor in 1802 to recognize outstanding services rendered to France, on the basis of personal merits. It is therefore fitting that we are standing today in this room referred to as the “Salon Napoleon”. The medal itself was designed by the famous French painter, Jacques-Louis David.

All nominations are decided by the President of the French Republic who is the Grand Master of the Order.

Since its inception, the Legion of Honor has been one of the most coveted distinctions in the world. Among its illustrious American recipients, one can mention in particular the late President Reagan, Generals Dwight Eisenhower, Colin Powell and Norman Schwarzkopf.

You were commissioned in military intelligence through the Reserve Officers’ Training Corps in 1974. Subsequently, you earned several degrees: a Bachelor of Arts from Auburn University, a Master of Science degree in Education from the University of Southern California in 1980, as well as a Master of Military Arts and Science from the U.S. Army Command and General Staff College in 1986.

Your military education includes no less than the Armour Officer Basic Course, the Military Intelligence Officers’ Advanced Course, as I mentioned before, the Command and General Staff College, as well as the Advanced Military Studies Program and the Air War College. Very impressive.

However, it is in your current position as Director of the Defense Intelligence Agency, the main U.S. Agency for military intelligence, that you have been one of the major architects of intelligence cooperation between the United States Defense Department and the French Ministry of Defense.

That time period between early 2009 and now has not been uneventful, to say the least: it has been marked by the operations in Libya and Afghanistan, the current war in Syria, the wave of Arab Springs, as well as the nuclear crises in Iran and North Korea, without forgetting Somalia and Yemen.

During the military operations in Libya and Afghanistan, remarkable progress has been achieved in the quality and quantity of exchanged intelligence.

Moreover, your personal involvement has been paramount so that political decisions have been promptly translated into efficient operational procedures.

Intelligence cooperation is a good illustration of the degree of trust that can exist between two countries. And here let me say that French-American relations have never been closer than they are today, as illustrated by President Hollande’s very successful visit to Washington in May, literally three days after his inauguration (…).

In addition, your Agency’s representatives are favoured interlocutors regularly met at NATO meetings or seminars of Heads of Military Intelligence in the Pacific Zone. In these multilateral meetings, France has always found in the United States a reliable partner that takes into account other nations’ views and allows it to promote its own position.

The Defense Intelligence Agency has also supported France’s reintegration into the military command structure of NATO. The task is not over, but the distance covered and the support received have been greatly appreciated.

Lieutenant General Burgess, you are indeed a true intelligence specialist with extensive knowledge of French capabilities in the areas of Special Forces and human intelligence. As of tomorrow, you will certainly be deeply missed by General Bolelli and his team in Paris.

And I wish you the very best in your future activities after your retirement from the service.

In recognition of your commitment to French-American friendship and of the outstanding services you have rendered to the French Armed Forces during your tenure as Director of the U.S. Defense Intelligence Agency, the President of the French Republic has decided to award you the French Legion of Honor in the rank of Knight.

It is a great honor for me to present you now with this distinction.

As protocol dictates, I will proceed in French with the medal presentation.