There are times when even the most jaded diplomats can be overcome with emotion. There are departures that are wrenching.

For me, this is one of those moments, and I know you all feel the same way as we have gathered here this evening to bid farewell to our dear friend Roland Celette. 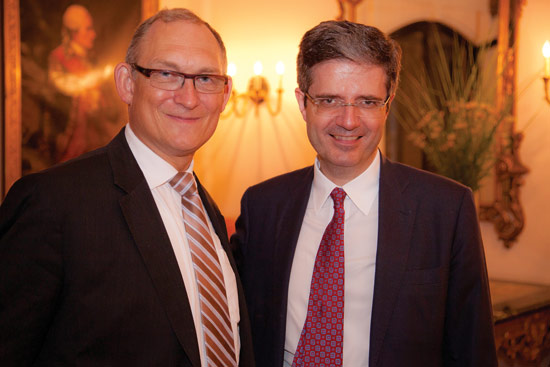 I cannot overstate the role played by Roland in promoting French culture in Washington and beyond over the last decade. With the support and friendship of successive ambassadors, François Bujon de L’Estang, Jean-David Levitte, Pierre Vimont and myself, he developed exceptional ties between the Embassy and many leading American institutions, which are very well represented tonight. And here I’d like to recognize Earl Powell, the director of the National Gallery of Art; Christina Scheppelmann, Artistic director of the National Opera; Laura Pels, President of the Laura Pels Foundation; Ray Barry, the Director of the American Film Institute; Richard Koshalek, the director of the Hirshorn Museum –and I should mention many others.

May I also acknowledge our friend Susan Lehrman and Peter Lengyel, the President of SAFRAN in the United States, two of our great partners.

In partnering with many key cultural institutions, and reaching out to a large American public, Roland helped put France at the heart of cultural activities in Washington, and also put Washington on the cultural map for French people. 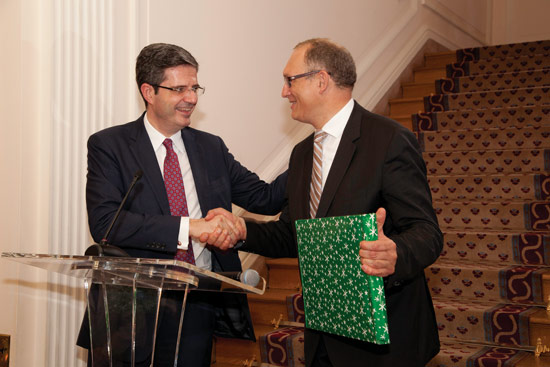 If Roland has been an extraordinary Cultural Attaché, it’s thanks to his incredible talent and skills, of course, but it’s first and foremost because he is an exceptional individual.

Who is Roland Celette ? Who is this elegant figure riding everywhere on his bike, rain or shine, scouring antiques shops and art galleries ?

Roland’s family comes from the Auvergne region, where his parents are still living. An old and beautiful part of France, the Auvergne is dear to the heart of Americans as it gave this country the Marquis de Lafayette.

Born in the land of the troubadours, Roland was drawn to literary studies and attended the prestigious Ecole Normale supérieure in Paris, earning a degree in French literature as well as Greek and Latin –we often speak Greek together.

As Roland himself says, he has always been torn between his passion for teaching and his passion for cultural work, his attachment to his native land and his attraction for new countries and new cultures.

After teaching at the universities of Osaka and Tohoku in Japan, he began working in the cultural section of the Foreign Ministry, at the French Embassy in Japan from 1981 to 1994. He then returned to France, where he was a professor at the University of Toulon and Director for International Relations there, before being tempted again by foreign climes and flying off to Cambodia, where he served from 1997 to 2001.

That was when he was appointed Cultural Attaché and Director of La Maison Française here in Washington, in September 2001. Over the years, he transformed this nice but average vehicle into a true Rolls-Royce.

A man of incredible culture and knowledge, Roland has many great qualities, but two of them are particularly remarkable. The first is his contagious enthusiasm and breath-taking creativity – the man has one new idea per second, when he is tired.

The second is his ability to fully integrate himself, body and soul, into the life of the country he’s living in. Because as Earl Powell so well said, Roland’s interest in foreign cultures and in the life of others is not only professional, it is personal.

Taken together, the results are impressive. A specialist in the 17th century, Roland became very interested in Japanese literature and civilization, publishing a dictionary of Sino-Japanese characters, a method for teaching French, and numerous articles in Japanese.

When he was in Cambodia, he developed a cultural program that provided support to artists, and one of the most famous Cambodian painters who is now celebrated worldwide owes his success to this program.

In the same vein, Roland had from day one a true love affair with Washington, where he has become a prominent figure –some would say a rock star, even though Roland is quiet and unassuming : very un-French qualities indeed! He lent his considerable talent and energy to an incredible number of tasks and activities, which have all proved hugely successful. Let me mention just a few.

On the European side, he launched a number of events that have now become fixtures on Washington’s cultural calendar: the EU Open House; the Euronight event; the New Masters of European Cinema, in collaboration with the National Gallery of Art; and the Kids Euro Festival.

Francophonie is another good example. A French professor when he began his career, he has maintained an unwavering commitment toward the French language and the culture of French-speaking countries. Our group of Francophone Ambassadors owes him a lot, as he helped give it new momentum.

Le Mois de la Francophonie – I really have to say that in French – with its famous event, the “Fête de la Francophonie” and its awards ceremony were launched and developed thanks to Roland, who found new events and new partners for the festival every year.

On a more bilateral side, he developed a great number of activities to help American and Washingtonian audiences discover French culture and arts. The Maison Française hosts more than 300 events every year, and some have become enormous successes.

In partnership with U.S. cultural institutions, its film program features more than 150 movies each year, often followed by events attended by the actors themselves.

Its musical programs, often rebroadcast over the radio, include five annual concert series spanning different genres: classical, jazz, contemporary, and so on.

Ladies and Gentlemen, Roland is a true visionary. He is a dreamer and a doer at the same time. I believe this is the secret of his success.

As the President of the Washington Performing Arts Society put it, Roland is the quintessential arts professional. I would add that he is also the quintessential diplomat, bringing together people from various backgrounds to promote what he likes the most : creation, dialog between different cultures, cross-fertilization.

That’s’s why Roland is a master, a maestro in cultural diplomacy. And in today’s challenging times, I believe these values and skills have never been as important as they are today.

Roland is also a great manager who knows how to get the people around him as committed and excited about new projects as he is.

It was his great idea to launch a French-American Cultural Foundation to support the Maison Française’s various initiatives through fund-raising efforts, and it proved a tremendous success.

Here I want to pay tribute to Leonard Silverstein, the president of the foundation, for his exemplary commitment to the Maison Française and its many activities.

Not everything has been easy though, as part of Roland’s stay in Washington coincided with the “French-bashing” period.

He might tell you how he himself once bought 2,000 seats at the Kennedy Center when a French play there was being ignored by the public, then found sponsors, sold back all the seats, and at the end of the day, made everyone in town rush to see the play! This is Roland’s magic.

Saint-John Perse, a French diplomat and poet who spent some time in Washington and even worked at the Library of Congress, once said that in our world, the only real threat is inertia, passivity.

That could be Roland’s motto. And on a more personal note, I am pretty sure that behind Roland’s commitment to the Arts lies a quest for spirituality. It was André Malraux who once said : “l’art est un anti-destin” –“art is an antidote to fate”, an avenue to eternity.

Let me also mention that Roland’s commitment to Culture and the Arts was recognized in Washington when he became the first foreigner to receive the Mayor’s Art Award. He was also named Chevalier of the French National Order of Merit in 2005.

Roland, it is impossible to say how much we will all miss you —your friends and colleagues at the Embassy, and all the so many friends you have made during these 11 years in Washington.

You are now flying back to Clermont-Ferrand to be closer to your parents. You will resume teaching but I know that some great ideas having to do with creating a new Art Foundation are already germinating in your brain.

So tonight we say “Bon Voyage to an adored French asset”, as Carol Joynt so wonderfully put it in her superb Washingtonian piece, we say bravo to a national and international treasure, and we wish the best of luck to a very dear friend./.