I would like to extend a very warm welcome to all of you for joining us at the Residence of France, and especially to the family and friends of the American officers who are about to receive French distinctions. 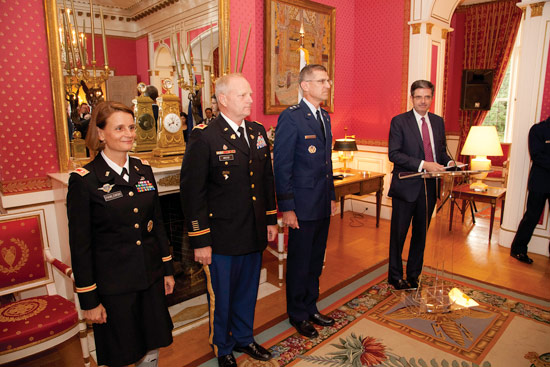 Our gathering is indeed a special occasion since I will have the distinct honor of presenting awards to three highly deserving officers of the United States Armed Forces, namely Major General Jay Santee of the United States Air Force, as well as Colonel Michael Meese and Lieutenant Colonel Theresia Pawlowski, both United States Army officers. These officers have played a significant role in the advancement of French-American military cooperation.

We have gathered also to bid farewell to three officers from the French Defense Mission in Washington whose tours of duty are coming to an end: Colonel Brice Houdet, the Assistant Defense and Military Attaché; Colonel Vincent de Kytspotter, the Assistant Defense Attaché in charge of Strategic Affairs; and Colonel Eric Kobak, the Armament Attaché, three great French Officers with whom I have had the great pleasure of working since my arrival in Washington as French Ambassador.

I will now start with the award presentation and bestow the Legion of Honor upon General Santee.

As some of you may know, the Legion of Honor was created in 1802 by Napoleon Bonaparte to reward extraordinary accomplishments and outstanding services rendered to France, on the basis of personal merit. It is France’s highest award and one of the most coveted distinctions in the world.

Major General Jay Santee, yYou entered the United States Air Force in 1981 and have logged over 1,800 flight hours as a navigator on the F-111.

Your career has been centered on space activities. You held command duty at the squadron, group and wing levels. You served successively as Commander of the 13th Space Warning Squadron, the 614th Space Operations Group and the 21st Space Wing.

And, as Director of the 14th Air Force Air and Space Operations Center, you were responsible for the planning and operations of various U.S. space assets.

However, it is during your posting in the Office of the Secretary of Defense in charge of policy in particular, that you have played a major role in the bilateral space cooperation between our two countries.

As a member of the lead committee on the Space Cooperation Forum established by the French Strategic Affairs Directorate and the Office of the U.S. Secretary of Defense, you often supported French positions and always helped find relevant solutions by taking into account France’s interests.

Your role was decisive, particularly in the development of an operational concept related to Space Situational Awareness by the French Ministry of Defense and the Pentagon. More generally, you are credited with establishing a trusting relationship with your French counterparts by offering some political and military insights needed for the understanding of American space stakes and our own interests.

In recognition of your contribution to enhancing French-American bilateral space cooperation, the President of the French Republic has awarded you the insignia of Knight of the Legion of Honor.

Ladies and gentlemen, the National Order of Merit also is one of France’s very highest awards. It was created in 1963 by then-President Charles de Gaulle to recognize both French citizens and foreigners for major achievements benefiting France.

Colonel Michael J. Meese, as a professor and head of the Department of Social Sciences at West Point Military Academy, you were called to serve by General David Petraeus, Commander of the International Security Assistance Force in Afghanistan, as his Assistant Chief of Staff from August 2010 to July 2011.

Prior to that assignment, you had already been an adviser to General Petraeus on several occasions including in Iraq. As an all-around remarkable officer and tireless worker, you quickly became an indispensible ISAF staff member, assisting the French Chief of Staff with brio. With a high degree of skills, experience and initiatives, you successfully and efficiently coordinated the activities of the various divisions.

You became perfectly integrated in the French team of the Chief of Staff and directly contributed to making it a most efficient unit.

In recognition of your personal contribution to the smooth operation of the International Security Assistance Force’s Staff, the President of the French Republic has awarded you the insignia of Knight of the National Order of Merit.

Lieutenant Colonel Theresia Pawlowski, you received your commission as a United States Army officer through the University of Oregon ROTC program in 1989.

As a signal officer, you held command duty at the platoon, company and battalion levels in Korea, Texas and Germany.

You also hold a Master’s degree in French language and civilization from the Middlebury College Language School in Paris and were a professor of French at the Military Academy of West Point from 2001 to 2004.

In 2004-2005, you attended the French Joint Defense College, also known as the College Interarmées de Defense, as an international fellow.

However, it is in your position as a political-military officer and head of the French Desk at the U.S. Joint Staff at the Pentagon since 2008, that the French Defense Mission has come to appreciate your outstanding professional and personal qualities.

You have repeatedly demonstrated your strong commitment to enhancing bilateral cooperation between our Armed Forces by stepping up exchanges of information and bilateral meetings between our Joint Staffs. In addition, you have always prioritized requests from the French Defense Mission and have intervened personally on several occasions to help our attachés.

As a favored interlocutor of the French Joint Staff, the President of the Republic has awarded you the insignia of Knight in the National Order of Merit.

I will now turn to our departing officers – three men for whom I have a profound professional as well as personal respect and esteem and I’d like to also send my best wishes to Sergeant-Major Marie Magendie, who will also leave this summer to come back to France.

Colonel Eric Kobak, you were responsible for Army and Joint Armament activities in liaison with the U.S. Army and U.S. Marine Corps.

Your actions in support of interoperability between the French and American Armed Forces, as well as in the area of bio-defense were decisive.

Moreover, you were the driving force in the dialogue between French and American armament manufacturers in these areas. Your expertise, the contacts you were able to develop and your participation in the organization of various industrial events was crucial in promoting French manufacturers in the United States. Finally, you played a major role in launching and managing several acquisition programs for our Armed Forces, including the Javelin program, whose systems were delivered in Afghanistan, the ammunition acquisition program for our troops’ training, and the Hellfire program, in which you invested a lot of time and effort.

As an information systems specialist, you are being reassigned to France as Deputy Director of the DGA Information Management Center in Bruz, near Rennes. We wish the very best to you and your family, your wife Celine and your two sons, Alexis and Leo, as you set up house in Brittany. And we are delighted to welcome your successor, Colonel Geoffroy Lenglin.

Colonel Vincent de Kytspotter, You arrived at the Embassy in the summer of 2009 to assume the duties of Assistant Defense Attaché in charge of Studies and Strategy. In that capacity, you had to deal with complex and sensitive international issues including Afghanistan.

As the expert on that part of the world, you understood all the politico-military aspects of that subject and were thus able to provide relevant analyses and insights to the officers of the Defense mission, the Embassy’s diplomats, and French civilian and military officials in France.

Particularly gifted and hard working, you drafted countless reports of the highest quality on that and other topics.

Moreover, you are unanimously respected by the interns in the defense mission who serve under your authority. Being extremely social, you are also well-known and deeply appreciated throughout the Embassy.

Perfectly integrated in the American community, your energy and dedication, and that of your wife, Helene, have won you many friends who will miss you dearly. And it’s a pleasure to welcome your successor, Lieutenant Colonel Claire Nestier. Colonel, you are being reassigned to the International Affairs Division at the French Joint Staff in Paris and I do not doubt that your outstanding professionalism and personal qualities will help you serve your country to the best of your ability.

Colonel Brice Houdet, you have been serving as the Assistant Defense Attaché and Army Attaché to the French Embassy since the summer of 2009, after having spent a year at the National Defense University where you graduated with a Master’s Degree in National Security Strategy.

As a paratrooper in the Foreign Legion, you had a most impressive operational career during which you were deployed to numerous theaters of operation including in Africa, more specifically in Chad and Ivory Coast, as well as in Bosnia and Kosovo.

You commanded the 2nd Paratroopers Regiment of the Foreign Legion, one of the most prestigious commands in the French Armed Forces.

During your tour of duty in the United States, you earned your paratrooper wings from the U.S. Army.

At the Embassy, not only were you an outstanding colleague to your fellow officers but you worked tirelessly to expand the bilateral defense relationship between the American and French Armed Forces. You and your wife, Delphine, have also been very active in the social sphere and you will be missed by many American and French friends. We are delighted to welcome this evening Colonel Houdet’s successor, Colonel Jacques Aragones.

We wish you great success in your new assignment at the French Defense Headquarters in Paris.

Let us now raise our glasses to celebrate both our awardees and our departing colleagues.