Barton Gordon Made Officer of the Legion of Honor

It’s a great pleasure and a great privilege for Sophie and me to welcome you tonight to our Residence, as we have gathered here this evening to honor Congressman Barton Gordon, a close and long-time friend of France and an outstanding individual whose constant motivation has been to serve the public good, in particular through his dedication to innovation, science and technology. 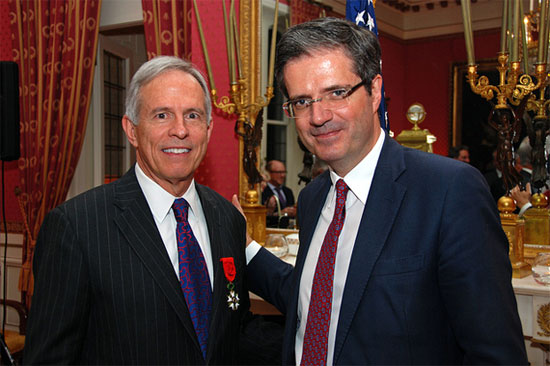 I would like to extend a warm welcome to Congressman Gordon’s family and friends who have joined us tonight to express their support and admiration, with a special word of thanks to his wife Leslie Peyton Gordon, to whom I also want to pay tribute this evening, their daughter Peyton Margaret Gordon, and Bart’s mother in law Grace Peyton.

We are also pleased to welcome several members of his former staff and many other friends.

Before proceeding with the ceremony itself, let me say a few words about the distinction that I will bestow upon Congressman Gordon in a few minutes.

The Legion of Honor was created by Napoleon Bonaparte in 1802 to reward extraordinary accomplishments and outstanding services rendered to France, based on a personal decision by the President of the French Republic.

It is France’s highest distinction and one of the most coveted in the world. The President of France has decided to promote Congressman Gordon to the rank of Officier, which is exceptional, illustrating France’s deep gratitude for his personal commitment to French-American relations and friendship.

Dear Barton Gordon, Born in Murfreesboro, Tennessee, the only child of a farmer and a teacher, you excelled in academics and leadership throughout your early life. You attended Central High School and Middle Tennessee State University, and then went on to law school at the University of Tennessee.

Even back in high school, you dreamed of one day being elected to the United States Congress. Your dream came true in 1984, when you replaced Al Gore, who left Tennessee’s 6th district congressional seat to run for the Senate.

At your retirement from Congress in January 2011, after 26 years - a full 13 terms! - you were among the most senior Members of Congress. As a final achievement on the hill, you served for 4 years as Chairman of the Committee on Science and Technology, spearheading landmark policy initiatives relating to competitiveness, science and math achievement, as well as energy independence. You also served for many years as a senior member of the Energy and Commerce Committee and as a member of many other committees.

Your Congressional service also included leadership roles in the Democratic Caucus. As Chairman of the Science and Technology Committee, in four years, you led the passage of 151 bills and resolutions through the House, all receiving bipartisan support. Bipartisanship is indeed one of your trademarks. Your signature achievement as Chairman was the passage and re-authorization of the landmark America COMPETES Act, which provided the blueprint for American research and development, and science education in America. Throughout your very successful congressional career, you advocated for a strong French/American bilateral relationship, meeting with visiting French delegations, traveling to France to meet with your French counterparts and promoting the importance of our two countries working together. I should add that you were a loyal and very enthusiastic member of the Congressional French Caucus. The French Caucus is thriving and today boasts 110 members in the House and Senate. You have been instrumental in this great success story.

One important way you enhanced collaboration between France and the United States was in fostering cooperation between NASA and the French Space Command. As Chairman of the Science and Technology Committee, your jurisdiction included oversight for NASA. In this capacity, you extended America’s hand to promote robust and effective coordination with your French space counterparts.

In addition, you led congressional delegations to France to learn more about nuclear energy and recycling projects sponsored by AREVA, and the international collaboration on nuclear fusion known as ITER. Your deep interest in transatlantic relations and international affairs more generally was demonstrated by your active membership in the North American Assembly, NATO Parliamentary Assembly, U.S.-EU Parliamentary Dialogue, and your position as the founding Chair of the OECD Caucus.

You are also known as a tireless competitor. For example, you earned the title of "Fastest Man in Congress" by beating all members of the Senate and House for 20 consecutive years in the Capitol Challenge annual charity race, with a best time of 16 minutes and 59 seconds in this celebrated 3-mile race.

Now in private life, you are a partner in the international law firm K&L Gates, as well as a distinguished fellow at the Council on Competitiveness. You are a frequent participant in various think tank programs, including the Former Member of Congress Europe Study Group that you recently formed.

You have also been active in programs and events bolstering collaboration between the U.S. Congress and the European Parliament, and you are currently co-chair of the Meridian International-sponsored U.S.-French leadership Dialogue that we together launched last June with Ambassador Holliday.

On a more personal note, I want to say that Bart was the very first person I met at my very first event in Washington, the day after my arrival from Canada.

Since then we’ve become friends – the four of us, with Leslie and Sophie.

If I may, your special connection to France is a family affair. Your lovely wife, Leslie, is on the board of American Friends of Blérancourt, which was established in 1985 to support the French National Museum at the Château de Blérancourt in Picardy, France, to promote French-American friendship. So tonight I also want to extend France’s gratitude to Leslie.

And it is my understanding that your 11-year-old daughter, Peyton, who is in sixth grade, is in her third year of French lessons.

Congressman Gordon, in recognition of your personal commitment to French-American friendship, and on behalf of the President of France, I will now bestow upon you the insignia of “Officier” in the Legion of Honor.