Elliot Carter, Commandeur of the Legion of Honor

It is a true privilege and great pleasure for me to preside at this ceremony tonight. Our gathering is indeed a special occasion as we honor a dear friend of France. A dear friend who is one of the most important composers of our time , a model of elegance and a timeless genius - Elliott Carter.

I would like to start by thanking our outstanding Cultural Counselor Antonin Baudry and his team for being such gracious hosts.

I would also like to extend a warm welcome to Elliott Carter’s family and friends who have joined us tonight to express their support and admiration.

With a special word of welcome to Mr. Carter’s grandson, Alexander Carter, and to the composers present this evening : Ned Rorem, Chou Wen-Chung, and Virgil Blackwell (who is also Mr. Carter’s assistant and has been a big help in planning this ceremony!) – and I’m only just naming a few.

I’d also like to acknowledge David Robertson, conductor of the St Louis Symphony and former principal conductor of l’Ensemble contemporain de l’IRCAM, and of course Mary Cronson, as well as Zizi Mueller, Director of Boosey and Hawkes, which is well represented here tonight! 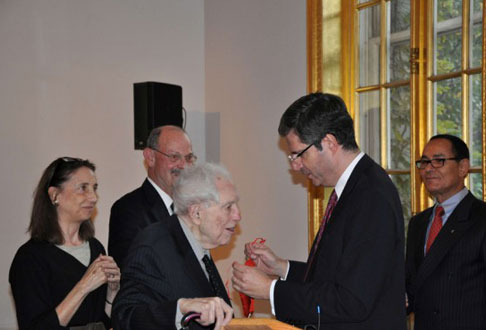 I know that you are completely fluent and your command of French is astonishing, so please allow me to say a few words in French.

Speaking about your life is a distinct honor for me this evening and I must say quite a challenge as well.

At 104 years old, you are one of the most creative, sharp and witty contemporary composers. In the world, in the last fifteen years, you have published more than fifty works, and throughout your career, you have been awarded countless prestigious music awards.

You were the first composer ever to receive the United States National Medal of Arts, one of very few to receive Germany’s Ernst Von Siemens Music Prize - which is considered to be the Nobel Prize of Music - and you were twice awarded the Pulitzer Prize.

Cher Elliott, your whole life has been devoted to writing music. I heard that you compose every day, with no exception until today. And so, if I were to list all the achievements of your relentlessly creative career, I’m afraid we would all be here for quite a while.

Although this list might be instructive for the rest of us: you’ve always had an extraordinary wit and a playful desire to surprise your audience. This is actually one of your trademarks.

At the age of 91, for the first time in your career, you created an opera, which you called “What Next?”

And last year, you secretly composed two pieces during the month preceding the concert in honor of your 103rd birthday. You called them respectively “Rigmarole” and “Mnemosyné,” after the Greek goddess of memory.

Indeed, I have heard that your memory is phenomenal. When you last came to Paris, which you hadn’t visited for years, you were able to say that a certain statue had been moved near the hotel Lutetia, where you like to stay; and that certain stained-glass windows at the Sainte-Chapelle had changed color!

You discovered France in 1923, at the age of eight, when your father - Elliott Carter, Sr. – showed you the battlegrounds and cemeteries of World War One. He was a profoundly committed pacifist, and he wished to impart an understanding of the devastation of the war.

But he wanted also to pass on to you his deep love for France and the French language. I think he succeeded beyond his expectations.

He wanted you to take over the family business, but you found your musical vocation at a very young age.

The story goes that you decided to devote your life to writing music at the age of 15, when you first heard Stravinsky’s “Rite of Spring.” It was a shock, and it transformed the way you thought about rhythm and structure.

You had already been playing piano for several years at that point, but growing up in Greenwich Village - where you were born and still live today - you were captivated by many other art forms which flourished in that Bohemian capital.

After the Horace Mann High School in the Bronx, you studied music at Harvard, graduating with a Master of Arts ; but in fact you focused more on literature, mathematics, and philosophy than music. The truth is you were a bit disappointed by the conservativeness of the music department. You described it as an old castle, surrounded by soldiers on horses, marching and trotting around.

And so, still eager to find your own style, your French adventure began.

In 1932, you were accepted at the Ecole Normale Superieure de Musique in Paris where you trained with French teacher and composer Nadia Boulanger.

And when you returned to the United States three years later, you had found a colorful, subtle and clear style, and were already a rising star.

You started writing music like poetry. At first, it was mostly because you were instinctively inspired by many writers, such as Joyce, Proust, Kafka, Rabelais and Saint-John Perse. But then, it became a whole philosophy. You started considering your scores as auditory scenarios, and musicians as true performers. Your aim became to dramatize their individuality and encourage their imagination.

Creating music was not enough. You found a balance between reviewing it in magazines, theorizing about it in articles, and teaching it in the most prestigious American universities.

You taught composition at Yale, Juilliard and Cornell, to name a few. Meanwhile, you also taught math and ancient Greek – two of your other passions – at St-John’s College in Annapolis!

In the United States, you represent European musical academism, and in France, you are recognized as one of the leading American voices in classical contemporary music.

Within your love affair with my country, your acquaintance and relationship with France is also professional. You’ve worked closely with many famous French musicians, such as your dear friends conductor and composer Pierre Boulez, the remarkable pianist Pierre-Laurent Aimard, for whom you wrote piano pieces, and I also want to mention that one of your most recent work is dedicated to conductor Ludovic Morlot, the Music Director of the Seattle Symphony Orchestra.

It is entitled “Instances” and will premiere early next year.

Here at the Cultural Services of the French Embassy, we are especially proud that, along with Pierre Boulez, you generously became an Honorary Founding Member of the French-American Fund for Contemporary Music in 2004.

And with your great support for almost ten years, this program has promoted more than 150 French-American collaborative projects in contemporary music.

The Legion of Honor was created in 1802 by Napoleon Bonaparte to reward extraordinary accomplishments and outstanding services rendered to France.

It is France’s highest award and one of the most coveted distinctions in the world.

So tonight, on behalf of the President of France, it is my privilege to bestow upon Elliott Carter the Legion of Honor with the rank of Commandeur, which is very exceptional.