Published on October 24, 2012
Remarks by Ambassador François Delattre, Ambassador of France to the United States 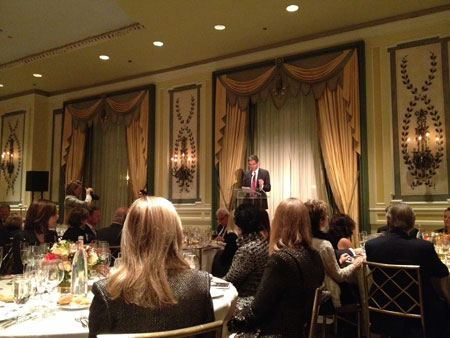 It’s a great honor to have you here tonight with the other distinguished members of the Curie Institute and I want to pay tribute to your commitment,

It’s a great pleasure for my wife Sophie and for me to be here with you this evening for the Marie Curie Charity Gala. Sophie and I have fond memories of the first Marie Curie Gala that we hosted last year at the French Embassy in Washington, and we are proud and delighted to continue this partnership.

As we all know, the vision and perseverance of that exceptional woman, Marie Curie, built the foundation of cancer treatment today. And the Institut Curie is more than ever at the center of the international fight against cancer.

So nothing could please me more than to celebrate the effort of this world-renowned, private, non-profit cancer center, the recipient of five Nobel Prizes, including two to Marie Curie herself—her 1903 prize in physics followed by her 1911 prize in chemistry, whose centennial we celebrated last year.

Radiation is everywhere: naturally occurring radioactivity; artificial radioactivity as a result of medical, industrial or nuclear activity; accidents, such as those at Chernobyl and Fukushima.

Today, we need to improve our understanding of its effect on living beings. Optimizing and integrating research in this vast and complex field on a national and international level is a necessity.

How do we evaluate the risks of radiation exposure compared with the benefits it offers in everyday medical applications? How can we get the world’s experts to collaborate on this issue?

As we launch the Latarjet fellowship tonight, I could not be happier to see that our two countries are joining efforts to open a new chapter in the fight against cancer.

Dear friends, our event tonight could not come at a better time, as French-American relations, and this is great news, have never been closer than they are today. That was illustrated by President Hollande’s very successful visit in Washington last May, literally three days after his inauguration.

In this very favorable context, the scientific and academic university cooperation between our two countries is growing stronger every year.

This focus on scientific exchanges should come as no surprise as research and innovation are the number 1, number 2 and number 3 priority in today’s France. And this is particularly true for life sciences.

So Ladies and Gentlemen what the Institut Curie does here in the U.S. is in many respects a source of inspiration for the growing scientific partnership between our two countries.

It also says a lot about the values that our two Nations share. The values of freedom and democracy coming from the American and French revolutions for sure, but also the values of human dignity and scientific progress in the service of all that are at the core of who we are.

These are the values that the Institut Curie promotes day after day, in such an exemplary way. And in the troubled times we are going through these values are today more than ever our best tool, our best moral compass, to go forward and to confront together the current challenges we face.

So my warmest thanks again to each and everyone of you and my warmest encouragements to the Institut Curie and its American partners./.