It’s such a pleasure for Sophie and me to welcome you all tonight to our Residence, as we are gathered here with Sophie-Caroline de Margerie for the launch of her wonderful book, American Lady.

We are extremely honored to have Justice Breyer and Madam Breyer with us this evening. Your presence means a lot to Sophie-Caroline and to all of us. 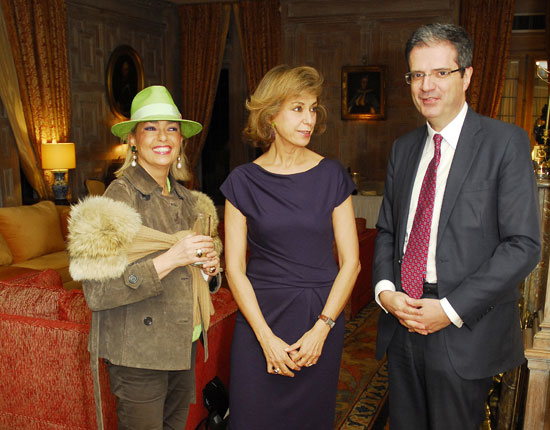 May I also extend a special word of welcome to Aniela Vilgrain. Aniela and Stanislas are exceptional individuals who are working on all fronts to promote French-American friendship. Aniela cooperated on American Lady and I would therefore like to extend my warmest congratulations to her.

Ma chère Sophie-Caroline, what a pleasure it is to welcome you this evening as our guest of honor.

We have known each other for several years and Sophie-Caroline is a true example, a true source of inspiration and admiration for me and for many people of my generation - since we belong to the same generation. Actually, she has been immensely successful in everything she has undertaken.

Sophie-Caroline was an outstanding student at Sciences Po, at the Sorbonne – where she earned a master’s degree in English literature - and at ENA – where she was in the same class as President Hollande; following her studies she became a diplomat. It goes without saying that she was an especially brilliant diplomat. To give you an example, she served as an advisor to President Mitterrand on European issues and in this respect played a key role in the negotiation of the Maastricht Treaty which is a cornerstone of European integration.

In 1992, Sophie-Caroline was appointed to the prestigious Conseil d’Etat (the French Council of State) as maître des requêtes. As such, she dealt with particularly important issues such as immigration, extradition and urban planning law, to name just a few.

Sophie-Caroline also sits on the board of several cultural institutions, including the Bibliothèque Nationale de France and the Fondation Royaumont. She is a member of the Aspen Institute in France and the editorial board of Commentaire - which is one of the best journals of its kind.

And in addition to all this Sophie-Caroline has embarked - also with a great deal of success – on a new path as a writer. She published a biography of Edmond Rostand in 1997. American Lady is her second book. It was published in France by Lafond in March 2011 and is published in the United States by Penguin.

I will of course leave you to talk about your very inspired biography of Susan Mary Alsop, the first one to be dedicated to this great lady. I can tell you I loved your book from start to finish.

Susan Mary Alsop was an unmatched intermediary between the two sides of the Atlantic, a very important figure in Washington society, but also a true friend of France. And you Sophie-Caroline bring your incredibly talented style and sense of analysis to this wonderful biography. A biography which in many ways reflects, I believe, your own passions and commitments – and to begin with, your profound attachment to French-American friendship that is part of your DNA.

And I have no doubt that American Lady will go far.