It’s a great pleasure and a tremendous privilege for our Consul General Frédéric Bontems, for our Economic Attaché Serge Krebs and for me to be here with you today as we have gathered in this very prestigious UT Southwestern Medical Center to honor Prof. Bruce Beutler, an exceptional scientist who is also an outstanding individual and a close and long-time friend of France. 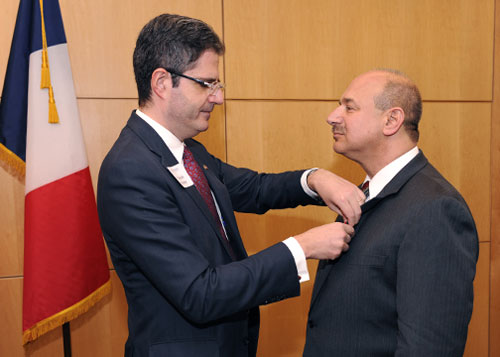 I would like to express my warmest thanks to Dr. Podolsky and his team (Cyndi Bassel, Betsy Layton) for hosting us and organizing this wonderful event.

I would also like to extend a warm word of welcome to Prof. Beutler’s friends and colleagues who have joined us today to express their support and admiration.

It’s a true privilege to be surrounded by so many great minds, with four Nobel Prize Laureates under the same roof… This is no ordinary feat ! 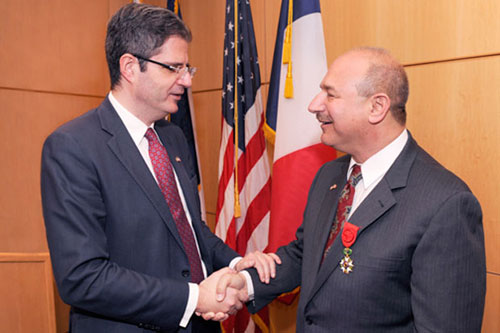 Before proceeding with the ceremony itself, let me say a few words about the distinction that I will bestow upon Prof. Beutler in a few minutes.

The Legion of Honor was created by Napoleon Bonaparte in 1802 to reward extraordinary accomplishments and outstanding services rendered to France, based on a personal decision by the President of the French Republic.

It is France’s highest distinction and one of the most coveted in the world. And the President of France has decided to promote directly Prof. Beutler to the rank of Officier, which is very exceptional, illustrating France’s deep gratitude for his so many accomplishments.

Prof. Beutler, you developed an interest in the biosciences at a very early age. Maybe at first you just wanted to follow in the footsteps of your father, Ernest, who was a distinguished biomedical scientist. His parents – your grandparents, refugees from Nazi Germany, were physicians themselves. So there is a strong family tradition here. As you yourself point out, and I quote : “From the age of 7 or so, I wanted to be a biologist, and nothing else”.

Your enthusiasm for the biosciences grew over time and, combined with your brilliant mind, led you to skip several grades and to graduate from the University of California at San Diego at the age of 18; an age when most are struggling to find their path in life. 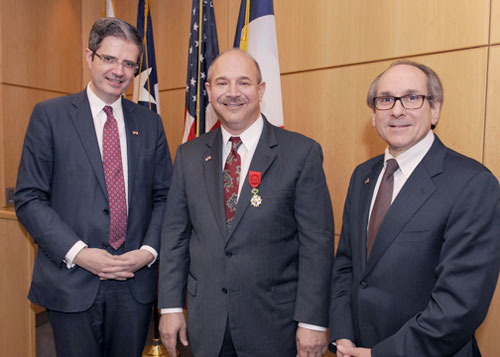 At 23 you received your Medical Doctor degree from the University of Chicago, the city where you were born. You completed two years of internship and residency at the University of Texas Southwestern Medical Center here in Dallas, studying internal medicine and neurology. Then, as a postdoctoral fellow at Rockefeller University, you discovered the role of the tumor necrosis factor as a key to the inflammatory response.

Back in Dallas by 1986, you held several positions at the Howard Hughes Medical Institute and UT Southwestern Medical Center. There, you developed inhibitors of tumor necrosis factor that are now widely used in clinical practice. Beyond that, you were searching for the bigger picture that would resolve the unrelenting question: how does the immune system recognize microbes that are known to cause infectious diseases? One can say now that your research has been immensely successful.

In 2000, you moved to California and, at the famous Scripps Research Institute, developed the largest program in the world for mouse mutagenesis. Eleven years later you came back to Dallas where you are currently holding a Regental Professorship at the UT Southwestern Medical Center. You also run the Center for Genetics of Host Defense and hold the Raymond and Ellen Willie Distinguished Chair in Cancer Research.

You have had a truly exceptional career. 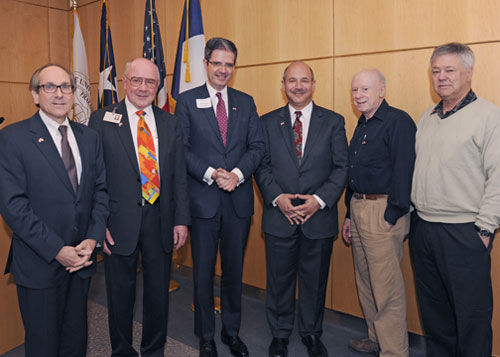 The excellence of your work and the abundance of your publications have been recognized on multiple occasions. You have authored or co-authored more than 300 papers (372, I believe), a significant number of which were written in collaboration with international groups.

France has long been one of your privileged partners. This year you have already published 2 peer-reviewed papers, in conjunction with the Centre National de Genotypage in Evry, and the Centre d’Immunologie de Marseille.

You worked with several other teams in France. Actually, your first publication with France was – if I am not mistaken – an editorial in Current Opinion in Immunology titled “Innate Immunity.”

That was co-authored by a certain Jules Hoffmann from the Institut de biologie moléculaire et cellulaire in Strasbourg.

It seems to me that your work and that of Professor Hoffmann were complementary and formed a sort of continuity. Your combined research paved the way for a new vision on the molecular defense mechanisms naturally developed by organisms, from the simplest to the most complex, to fight infectious diseases. It is fair to say that your work opened an entirely new field in immunology.

Last year, in recognition of your joint efforts, the Nobel Foundation awarded you (along with Prof. Hoffmann and Dr. Steinman) the highest distinction in science. I know you have other passions in life, and a deep admiration for J.S. Bach in particular (that you share with your sons, and that I share with you).

Tonight, Prof. Beutler, France would like to show its esteem and admiration by honoring you, a world-renowned expert in immunology, a man of exceptional professional and human qualities, who has built many bridges between the United States and France.

In recognition of your extraordinary accomplishments and your personal commitment to French-American friendship, I will now bestow upon you the insignia of “Officer” in the Legion of Honor. 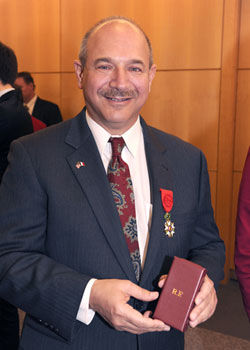