It is a great pleasure to host you here tonight on this very special occasion.

We welcome many individuals and organizations to the residence every week with various connections to France. But tonight we welcome people with the strongest connection of all: their very blood.

Your ancestors, shoulder to shoulder with the French, changed the world and brought revolution to your country and mine. Since 1890, the Daughters of the American Revolution have honored the principles of our revolutions through your three pillars: education, historic preservation, and patriotism.

I understand Mount Vernon, the home of our beloved George Washington, will give the Residence a seedling from the plantation as a token of your friendship. I cannot thank you enough for this wonderful gift. This tree has a special place in history, as it is from Mount Vernon, the home of George Washington, the friend and comrade of the Marquis de Lafayette, whose memory we honor tonight along with Rochambeau, the other French general who led us to victory.

As you can see, the portraits of Lafayette and Rochambeau and Washington are prominently displayed in this house, so you can say, they always keep an eye on me… and keep me in line. I’m sure they will lecture me later on my French accent… 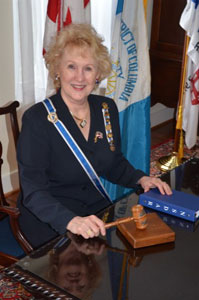 I hope that Lafayette will not mind that we are celebrating his birthday over two months late. He was born on September 6 and often referred to as “the French Founding Father”. It says a lot about the fact that the values coming from the French and the American revolutions are part of our common DNA. Let’s never forget that our two countries owe each other their very existence as free Nations (…).

2012 also marks the 110th anniversary of the gift of the French people of the Statue of Rochambeau in Lafayette Park. It was received by President Teddy Roosevelt from Ambassador Jules Cambon in May 1902. Lafayette and Rochambeau family members attended, and many celebrations took place in Paris as a result.

You know that in the parlor of Mount Vernon hang the keys of the Bastille that Lafayette so kindly gave to Washington.

So this tree is indeed very special, and will be a constant reminder of our friendship to future ambassadors and their families, as well as visitors to the residence. Please know how much this means to me and the people of France. Thank You so very much.

Last year Madame Wright, your President General, travelled to Paris and honored Lafayette’s grave with other dignitaries. She paid tribute to the DAR presence in France for over a century by visiting the town of Tilloloy in the Somme, where the mayor, Gérard Comyn, and members of the town council, and their families, gave her a warm welcome.

Madame Wright laid a wreath to commemorate the war relief funds donated by the DAR, following WWI, to reconstruct the water system in Tilloloy. It is no wonder that the people of Tilloloy still have a special place in their hearts for the ladies of your organization.

I want to express my warmest thanks to Madame Rogers, the state regent of the District of Columbia, who organized tonight’s event and brought us all together.

I’d like to congratulate Madame Jan Cousteau, a board member of the Alliance Francaise, who was awarded your National Conservation Medal earlier this summer. She is here tonight with her daughter Alexandra, and her granddaughter Clementine. Let’s applaud her and her dedication to the oceans.

May I also extend a special word of thanks to Stephanie Green for making this event possible and for her commitment to DAR and to French-American friendship.

Our French and American ancestors would be very pleased as French American relations have never been stronger than they are today, as illustrated by President Hollande’s very successful visit to Washington last May, literally three days after his inauguration.

In today’s testing times, let’s never forget that the values that our two countries share, the values coming from the French and the American revolutions are today more than ever our best guide, our best moral compass, to confront together the current challenges we face. This is I believe the strong message of the Daughters of the American Revolution.

So my warmest thanks again to each and everyone of you, and before I turn the podium over to Madame Rogers, may I say