Published on November 28, 2012
Remarks by François Delattre, Ambassador of France to the United States.

It is a great pleasure and honor for my wife Sophie and for me to welcome you tonight to the French Residence to celebrate The Honorable Joseph I. Lieberman. There are too many distinguished guests this evening to recognize everyone by name, but I would like to extend a special welcome to Senator Lieberman’s wife, Hadassah, to whom I also want to pay tribute tonight.

May I also recognize Bernard-Henri Lévy, a leading French writer and philosopher who is a long-time friend of America. 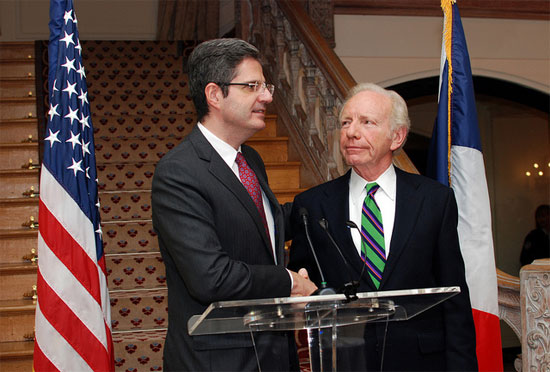 Let me start with the simple phrase: “the US-France alliance has never been stronger.” That is not a statement by a French official — although it certainly could be. It is a quote from Senator Lieberman. It is actually a tweet that you sent, Senator, after your last trip to France in August. As you can see, we do monitor tweets at the French Embassy.

Senator, I could not agree more with your statement : French-American relations have never been stronger, as illustrated by President Hollande’s very successful visit to Washington last May, literally three days after his inauguration.

The latest Transatlantic Trends Report by the German Marshall Fund shows 81% of French respondents holding a favorable view of the U.S., three-quarters believing that our two countries have common values and common interests. These numbers, the highest in the European Union, say it all.

Most nations feel they have to balance their interests and their values when they define their diplomacy. Few, I think, actually believe that pursuing their democratic values will ultimately serve their interests. We do believe this, as does America, and you Senator, have always proved remarkably consistent.

With your Senate colleagues and friends John Mc Cain and Lindsey Graham, the “three Amigos”, you were among the very first American leaders to call for military intervention to stop the slaughter caused by Colonel Qaddafi in Libya. And it made a difference. Ultimately the NATO coalition defeated Qaddafi and helped open a new future for the Libyan people. And I am proud to say that France was there to help lead in this effort.

Bernard-Henri Lévy also made a difference in this respect. And I am glad that Ambassador Aujali of Libya is with us tonight.

When it comes to Iran, Senator, you have been at the center of a series of successful legislative efforts in recent years to impose crippling sanctions on the Iranians for their illicit nuclear activities, but also to sanction Iranian officials responsible for human rights abuses and bolstering efforts to get information technologies to dissidents inside Iran. This is very much what my country has helped achieve on the other side of the Atlantic, with our European partners.

Let me go back a little further and remind our friends tonight of your role in the 1990s to end the war in the Balkans, working with Republicans like Bob Dole and John McCain and with Democrats like Joe Biden to urge the arming of the opposition in Bosnia and airstrikes against the Serb aggressors.

I was on President Chirac’s foreign policy team in those days leading up to the Dayton / Paris agreement, and I want to express my personal appreciation for your help in those terrible days for Europe. Here again you made a difference – as you did, Cher Bernard-Henri Lévy, in France.

Of course I couldn’t fail to mention the situation in Syria. Once again, you have been at the forefront in calling for the West to ensure that the opposition gets the support it needs, visiting the refugee camps on the Turkish-Syrian border and meeting with the Free Syrian Army. You know where France stands on Syria. We believe that there might be a chance, just a chance, to at last get things moving in the right direction by giving our full support to the Syrian National Coalition that was recently established with decisive help from the United States.

Senator, your commitment to French-American friendship and to the transatlantic partnership goes beyond the crises I was referring to.

You are one of the original members of the Congressional French Caucus, when it was founded in 2003. The French Caucus is a great success story: with 109 members in the House and Senate, it is one of the largest and most successful caucuses of its kind on the hill.

Beyond your commitment to international affairs, your career has been a remarkable American journey. It is most impressive, starting with your prominent role in Senator Robert F Kennedy’s presidential campaign in 1968; your 10 years in the Connecticut State Senate, where you became the Majority leader; your election as Connecticut’s first full-time State Attorney General in 1982; and then your election in 1988 to the U.S. Senate, where you were re-elected three times.

During these years, for all the attention you have given to foreign policy, you have also had tremendous accomplishments on domestic issues, usually achieved thanks to your long-standing commitment to work across the aisle.

Here I would lie to recognize former Secretary Michael Chertoff as well as Director James Clapper and several other members and former members of the Intelligence community.

Senator Lieberman, you have also been a leader in the Congress on clean air and climate issues, sponsoring bipartisan legislation over the years. You have been a strong advocate for cyber security legislation.

On education, you have also been a strong voice in support of investing in American public schools. And, you led the successful effort to repeal “Don’t Ask, Don’t Tell.”

My purpose here is certainly not to comment on American domestic policy, but to underline that you are part of a great American tradition. The tradition of the people who argue that the fate of freedom at home and freedom abroad are two faces of the same coin.

And in today’s testing times, these values of freedom and democracy coming from the French and the American revolutions are more than ever our best guide, our best compass, to confront together the current challenges we face.

So tonight we express our deep gratitude and admiration to a great American who so well embodies these shared values.