Celebration of the 50th Anniversary of the Elysée Treaty

France and Germany are each other’s closest and most important political, economical and cultural partners. The Elysée Treaty, signed on January 22, 1963, by French President, General de Gaulle, and German Chancellor, Konrad Adenauer, was the basis of reconciliation between the two countries. It remains today the cornerstone of French-German cooperation, which is the main engine of the European Union. 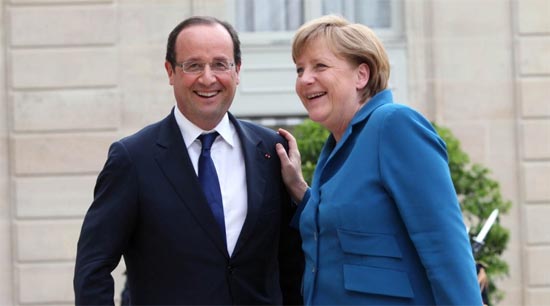 Fifty years after the signing of the Elysée Treaty, the French president, François Hollande, called for “the opening up of new possibilities in our cooperation.” That’s why the Franco-German Year will provide an opportunity to prepare the ground for a close and balanced relationship between France and Germany that is essential to the effective functioning of Europe and which is firmly focused on the future. The Franco-German Year aims to reaffirm the great diversity of our friendship and to convey the significance of our collective commitments.

Throughout the Franco-German Year, a wide variety of events and projects will be held in France and Germany but also all around the world, reflecting the diversity of Franco-German relations. The very strong ties between both civil societies, through which dedicated men and women laid the foundations for the rapprochement between the two states from 1945 onward, will be particularly highlighted. The young people in both countries, who rediscover and revitalize this unique bilateral relationship, will be another major focus. With this anniversary year, Germany and France want to look back in thankfulness, but also look together toward a common European future.

January 22, 2013: The German Chancellor, the French President as well as numerous ministers and members of the two parliaments will meet in Berlin to commemorate the signing of the Elysée Treaty. There will be a Franco-German Ministerial Council meeting and a joint parliamentary session. A concert will be held at the Berlin Konzerthaus and the French-German Youth Office will organize a “youth parliament” session;

July 5, 2013: The French-German Youth Office will celebrate its 50th anniversary in Paris.

To find out more about the 50th anniversary, visit the official website of the Franco-German Year: www.france-allemagne.fr