What is the Elysée Treaty?

On January 22, 1963, Chancellor Konrad Adenauer and General de Gaulle signed the treaty on French-German cooperation, which became known as the “Élysée Treaty”. The agreement sealed Franco-German reconciliation and formed the bedrock for the Franco-German partnership. Among other things, the Elysée Treaty introduced a binding timetable for regular meetings at all levels. The idea was to make cooperation between the two countries a matter of course. It included: 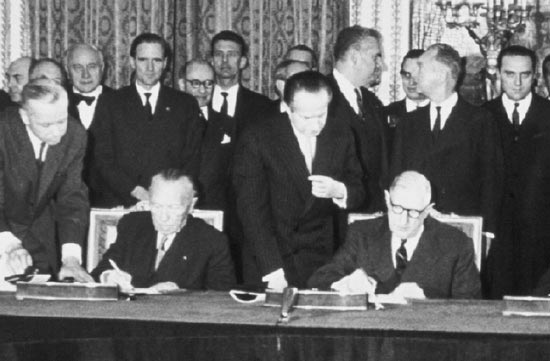 Regular meetings between heads of state and government, at least twice a year (today, it is more likely to be twice a month).

Regular meetings between the ministers of foreign affairs and exchanges between senior officials of the two ministries, embassies and consulates.

Regular meetings between the ministers of defense and the chiefs of staff of the two countries as well as the ministers and authorities in charge of education and youth.

Creation of an interministerial commission to monitor and coordinate the cooperation and to report to both governments. Today, this role is played by the European affairs ministers, who are also Secretaries-General for French-German cooperation.

The leaders of the two countries were convinced however that they could not be brought together by politics and treaties between the two nations alone. The aim was reconciliation not just between governments but also between members of society. The process had to become an integral part of people’s day-to-day existence. As such, the leaders decided to focus their attention on the countries’ young people. The Elysée Treaty launched Franco-German high schools. It also paved the way for the creation of the Franco-German Youth Office that has since contributed to more than 8 million cross-border exchanges.

What are the main developments as a result of the Elysée Treaty?

The structure and scope of the cooperation has expanded: new bodies for high-level consultation and cooperation have been created in the areas of defense, culture, environment, economy and finance. The regular summits have been transformed into a Council of Ministers involving different members of the French and German governments. Constant dialogue between the French and German authorities is facilitated by numerous exchanges of officials. The “Blaesheim process”, through which the French President and the German Chancellor meet approximately every two months, is also a product of the Elysée Treaty.

Town twinning schemes and youth exchanges are other examples of the successful and enduring projects adopted to cement the Franco-German friendship. Today, 61,000 young people take part in Franco-German school exchange programmes and 6,000 students take courses in the partner country every year. Around 80,000 pupils are enrolled in bilingual French-German classes, and 22% of French school pupils currently study German. The Franco-German University, created in 1999 and made up of a network of affiliated French and German universities, offers 130 integrated courses in France and Germany. Many French and German towns, schools and regions have established twinning agreements since the treaty was signed, leading to numerous economic, touristic, school and extra-curricular exchanges.

The French-German EU “engine”: the two countries were able to initiate and develop various projects and proposals to move European integration forward, such as the creation of a French-German Brigade (which prefigured the Eurocorps and the development of the Common Security and Defense Policy), the successful launching of EADS and Airbus, the borderless Schengen Area, the Euro and the adoption of the Lisbon Treaty. Recently, the cooperation between France and Germany has also been instrumental in setting up the European Stability Mechanism and the Fiscal Pact.