Staff members of the Embassies of Germany and France in Washington DC came together to celebrate and mark the semicentennial of Franco-German Partnership in their own way at the Charles de Gaulle Square of the Embassy of France.

The signing of the Élysée Treaty on 22 January 1963 marked a profound and historic change in the relationship between France and Germany. Its 50th anniversary is therefore being celebrated by French and Germans worldwide with a Franco-German year. 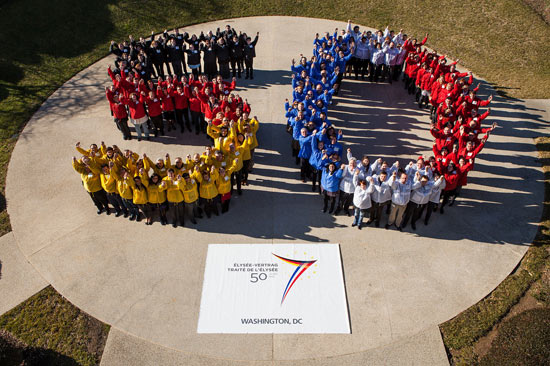 A number of events will also take place here in the United States of America. Joint visits by German and French officials, including by the Ambassadors, will take place in several States of the country. An exhibition called GERMANY AND FRANCE - HALF A CENTURY OF FRIENDSHIP AND COOPERATION will be shown all over the US by the German and French consulates.

Events taking place in Washington DC include a roundtable seminar at the BMW Center for German and European Studies at Georgetown University in early February, a colloquium at the Center for Transatlantic Relations (CTR) of Johns Hopkins School of Advanced International Studies (SAIS) in mid-March and a debate contest co-organized by George Washington University (GWU) and American University (AU) to be held in April 2013.

The Franco-German partnership is one of the cornerstones of the European Union. It formed the basis of European post-war reconciliation and reconstruction, which culminated in the continent’s integration as we know it today. The Treaty not only laid the foundation for a lasting and trusting bilateral partnership, but it was also the engine for a peaceful and prosperous European Union. This was honored by the Norwegian Nobel Committee, which awarded the 2012 Nobel Peace Prize to the European Union, stating that “The union and its forerunners have for over six decades contributed to the advancement of peace and reconciliation, democracy and human rights in Europe.”

At the outset of the 21st century, France and Germany as partners face the continuous task of adapting Europe further to changing international challenges and opportunities, like energy crises and climate change, new security threats and threats to financial stability, globalization and new technologies.

Logo and pictures can be downloaded at http://bit.ly/WIY7Cm