It is a great honor and privilege for our Consul General Gaël de Maisonneuve, for our Honorary Consul François Kloc and for me to be here with you today for the grand opening of Buffet Group USA North American Headquarters, and for the official launch of the 2nd French Week in Jacksonville.

Jacksonville has rich historical and cultural ties to France, being first discovered by French explorer Jean Ribault 450 years ago in 1562.

As we celebrate the 450th anniversary of French presence in Florida, I want to express my warmest thanks to Mayor Brown, his staff and the local community. On May 1st, 2012, two French Naval schooners commemorated this landing in Jacksonville. Under Mayor Brown’s leadership, the festivities included various ceremonies, an exhibition at the Beaches Museum and the first “French Week” in Jacksonville. 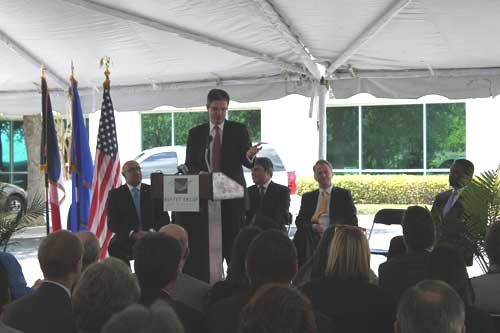 Today, I am happy to see that Jacksonville is launching its second “French Week Jacksonville.”

“French week Jacksonville” showcases the richness and depth of the French presence in Florida thanks to a wide array of French-related social and cultural events: a French film festival at Edward Waters College, a walking tour of the old city and an art walk.

You can also experience a taste of France at some of the city’s fine restaurants.

Celebrations marking the 450th anniversary of the French presence in Florida will continue over the following months and I am especially looking forward to the commemoration of the foundation of Fort Caroline in June 2014.

As you know, there is a sister-city relationship between Jacksonville and the city of Nantes in France that is growing stronger every year.

To give you just a few examples, the two cities have launched a program of exchanges among schools and universities enabling groups of students and professors to regularly visit the partnering city.

Rich cultural exchanges also link the two cities thanks to Nantes Conservatory and the Music Department of University of North Florida. Internationally known for its Jazz festival, Jacksonville has teamed up with the dynamic Eclectic Association and the Conseil Nantais de la Jeunesse to allow young people from Nantes to come to Florida.

Against this backdrop, there is a growing business partnership between Jacksonville and France, and France is one of the leading foreign investors in Jacksonville.

Today’s grand opening is a very good illustration of this. Buffet Group is a wonderful and very successful company and one of the world leaders for the wind instruments. And the opening of Buffet Group USA North American Headquarters here in Jacksonville says a lot about the long-term partnership between Buffet Group and Jacksonville, between France and your great city.

Here I would like to express my warmest thanks and congratulations to Buffet Group CEO Antoine Beaussant and to Buffet Group USA Vice-President François Kloc who is behind this project.

I would also like to thank the representatives of Fondations Capital, the majority shareholder, who have come especially from Paris to be here with us today: its President Xavier Marin, and his partner Philippe Renault.

Saft is another great example of a major French investment in Jacksonville. Saft manufactures advanced batteries in its Jacksonville plant that I will visit later today.

So as you can see the purpose of my visit here in Jacksonville is to promote the cultural but also the economic ties between Jacksonville and France. And in this regard we have every reason to be optimistic.

Thank you again to all of you./.