Published on May 14, 2013
Speech by Ambassador François Delattre

Dear Mr McKie, President of the Board,

Dear Board Members and teachers,

It is a great pleasure for our outstanding Consul General Graham Paul and for me to be with you tonight for a very special occasion, as we have gathered here this evening to honor our friend Alain Weber, President of the Lycée français of Chicago.

I would like to extend a warm welcome to Alain Weber’s family and friends who have joined us here tonight to show their support and admiration.

The Legion of Honor that I will bestow upon Alain Weber in a few minutes with the rank of knight, Chevalier, was created by Napoleon Bonaparte in 1802 to reward extraordinary accomplishments and outstanding services rendered to France, based on a personal decision by the President of the French Republic. 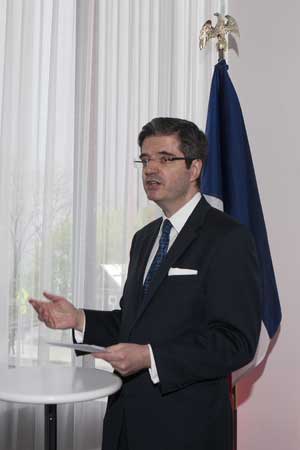 Your entire life has been dedicated to education, I should add international education. Born to Romanian parents in Corrèze, in the heart of France (la France profonde), a region famous for being the political stronghold of French President François Hollande, you are a model of social inclusion and embody the successful promotion of the French education system abroad.

After obtaining a Master of Arts in French literature at the University of Massachusetts, you received a diploma in education and linguistics from the Ecole normale supérieure de Montréal in 1973. Since then, you have held various responsibilities in many schools with a clear North American orientation. Among other accomplishments, you were the director of the Selwyn House School in Montreal and the international French-American School in San Francisco.

You then went on to found the International school of Indianapolis, which has become the pillar of international education in Indiana. At the same time, you assumed the role of Honorary Consul of France and Germany, becoming the first person in the United States to represent the two countries. Always ready to take on new challenges, you moved to Chicago to manage the development of the Lycée français in 2007.

Cher Alain, you are deeply committed to your mission of unleashing each student’s potential and preparing them to become citizens of the world and to make their own unique contribution to the world.

Thanks to you and your team at the Lycée, the children will get the best possible education; they will benefit from the academic rigor of the French curriculum and from a distinctive bilingual and bicultural education.

You know from your personal and professional experience that dual-language learners develop better cognitive skills and display a greater capacity for creativity, adaptability, analytical skills, and multitasking.

It also helps them integrate multicultural and international perspectives and distinguish themselves in an increasingly competitive world. It comes as no surprise that your students are accepted by the most prestigious French and American universities, such as Stanford, Harvard, the University of Chicago and many others.

Thanks to your vision, The Lycée français de Chicago brings together the best of the French and American education systems and through you, Cher Alain, I want to pay tribute tonight to the entire leadership and staff of the Lycée, its excellent teachers and its board members.

Cher Alain, you can be proud of what your school has become under your leadership. It welcomes 660 students and its numbers are still growing steadily, attracting beyond a strictly French and American public, an important number of other nationalities, more than 35 in all . This success is the reason for the decision to build a brand new, larger campus in Lincoln Square.

It is a major undertaking that involves consulting the school community, planning the construction of the building, negotiating with architects and bankers, raising funds, making large investments and tough decisions. So it’s a huge amount of work, but as a marathon runner, you have the endurance to make it happen. And you know you can count on my support and the support of the Consul general to help you face this challenge.

The French government has already provided a financial guarantee of $10 million.

The Lycée français is a unique asset for Chicago but also for French-American relations.

The U.S. is France’s largest trading partner outside of the EU and, more importantly, the top foreign investor in France and the leading destination of French investments abroad. And the presence of a French School is key for French nationals and for the localization of French companies. The Lycée Français also contributes to making Chicago a global city and its students global citizens.

In recognition of your exemplary commitment to French-American education, cooperation and friendship, and on behalf of the President of the French Republic, it is my privilege to bestow upon you the insignia of Chevalier of the Legion of Honor.