Ladies and Gentlemen of the Normandy Institute,

I would like to wish you all a very warm welcome to the French Embassy. 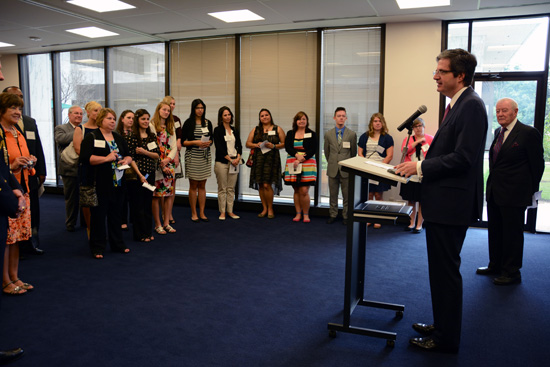 We recall and celebrate here today two events from the Second World War which both happened in the month of June, although four years apart. First, there are of course the landings on the beaches in Normandy, on June 6, 1944, the focus of interest of the Normandy Institute.

Today we also commemorate the 73rd anniversary of General de Gaulle’s address to the French people, on June 18, 1940, four years earlier than the D-Day Landings. Let me explain to you why it makes sense to link these two decisive moments for the fate of France during World War II. 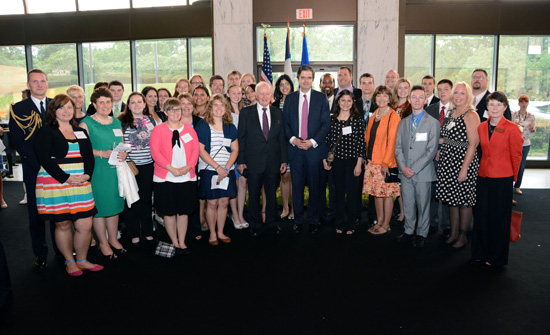 Remember that in the spring of 1940, France had been invaded and occupied by the enemy. The French armed forces fought very courageously, losing some 120,000 soldiers, but also shooting down some 750 enemy aircraft, in only forty days of fierce combat.

Those were days of extreme darkness and despair.

However, in the midst of disaster, General Charles de Gaulle, who did not accept defeat, flew to London with hopes of later reconquering the country. On June 18, 1940, from the studios of Britain’s national radio, the BBC, he appealed to the people of France to refuse to lay down their arms, to resist and to fight the invader.

With an astonishing premonition of what would take place four years later, General de Gaulle rekindled hope in the French people’s hearts when he proclaimed “France does not stand alone. She is not isolated. Behind her, lies a vast empire and she can align with the British Empire which commands the seas and is continuing the struggle. Like England, she can draw on the immense industrial resources of the United States.”

On June 6, 1944, on the beaches of Normandy, four years after his appeal for resistance, General de Gaulle’s vision became a reality.

In the cold mist of that gray morning, Operation Overlord brought the liberators to the soil of France where they broke through the wall of fire set off by the enemy.

They joined forces with the French Resistance – the Underground organization of half a million men and women – who had secretly assisted their D-Day Landings.

The people of France will never forget what the Sons of America sacrificed to restore France’s liberty.

Mr. Albert Small, as a World War II veteran yourself, you are one of our heroes.

For several years now, the Project Normandy “Sacrifice for Freedom” that you started with the assistance of Mr. Robert Perry, Chairman and President of the National Trust for the Humanities, has been centered around promoting public awareness of the historical significance of the American participation in the invasion and the liberation of Europe, and more specifically, the commemoration of D-Day and the Battle of Normandy.

You have acquainted participating American students and their teachers with historical documents of the invasion and have instilled in them a desire to get to know those young American soldiers who sacrificed their lives 69 years ago.

Thanks to your endeavor, these students have been researching soldiers from their home state who are buried at the American Cemetery in Normandy.

By traveling to France, touring the D-Day battlefields, laying wreaths at their gravesites, producing web pages on each of the fallen soldiers, you have helped ensure that these young American students both honor and preserve the memory and history of those fallen servicemen, so that the stories of who they were and what they did to save the world from tyranny can live for many generations to come.

Mr. Small, Mr. Perry and the members of the Normandy Institute, your noble endeavor deserves our highest praise and appreciation for teaching new generations of Americans the duty to remember those who made the ultimate sacrifice so that freedom could prevail. On behalf of my country, I want to tell you how grateful I am to each and everyone of you and how honored I feel to welcome you today to the French embassy.