It is a great privilege for our Consul General to the Southeast Denis Barbet, for his Press Attaché Claire Collobert, for our Honorary Consul in Charleston Corinne Gaillard-Mills and for me to be with you this afternoon on this very special occasion, as we have gathered here today to honor 7 American veterans of World War II who live in South Carolina.

Dear veterans, thank you all for being with us in Charleston this afternoon, along with your families and your friends who have joined you to express their support and admiration. 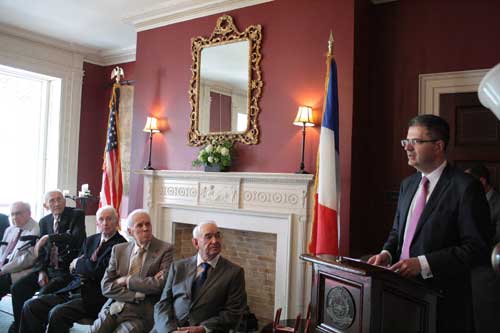 Today, we pay tribute to seven American heroes. Their contribution took place during a very difficult time in both French and European history, and by celebrating their courage this afternoon, France remembers the American soldiers who helped it to recover its liberty, its pride and its honor.

Today, we also remember that the longstanding French-American friendship is bound in blood and that from Yorktown and Lafayette to the battlefields of World War I and the beaches of Normandy, our two countries have always stood shoulder to shoulder to defend and promote the values of freedom and democracy. We remember that our two countries owe each other their very existence as free Nations.

Today’s ceremony takes on even greater significance when you consider that it was here in Charleston that Lafayette first landed in the New World on June 18, 1777, on the ship “La Victoire,” to provide French support for the fight for American independence. He stayed here for a few days before meeting with Congress in Philadelphia.

Our event this afternoon is very symbolic since it is happening only a few days after the 69th Anniversary of the Normandy landings. It is taking place at a time when French-American relations - and this is a good news - have rarely been stronger than they are today. 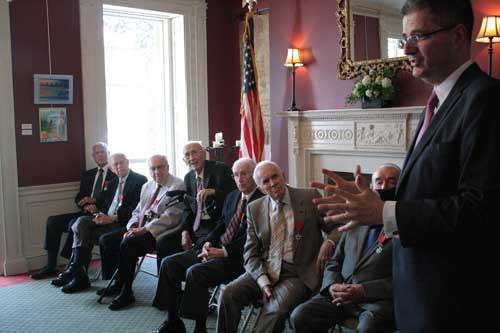 On the strategic front, our two countries are each other’s closest ally in the fight against terrorism, as illustrated by France’s military operation in Mali, with much appreciated American support, to combat Al-Qaeda in North Africa.

In a broader perspective, we strongly believe that the more the emerging world is rising, the more the transatlantic partnership is vital for us all as one of the backbones of today’s and tomorrow’s world. In this respect too we have to be true to our shared history and values as exemplified by our veterans.

You are true heroes and will be our heroes forever. We French will never forget what you did to restore our freedom. And today, we also remember the ultimate sacrifice of so many of your comrades who rest on French soil. They will remain forever in our hearts.

In recognition of your heroic actions and extraordinary accomplishments, the President of the French Republic nominated you to the Legion of Honor, with the rank of Chevalier. I will now bestow this distinguished award upon you, one after the other, in order of seniority.

The Legion of Honor was created in 1802 by Napoleon Bonarparte to reward extraordinary accomplishments and outstanding services rendered to France, based on a decision taken by the President of the French Republic. 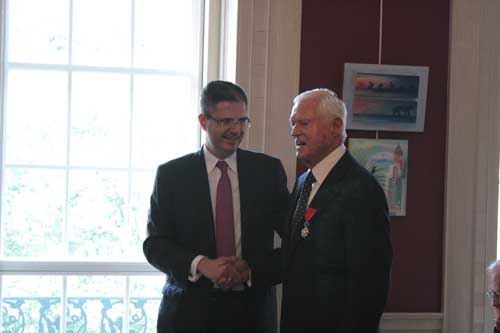 You entered into active duty on May 30, 1942, as Second Lieutenant and served as Platoon Officer of the 353rd Coast Artillery Battalion of the United States Army.

After intensive training in Camp Stewart, Georgia, and Fort Monroe, Virginia, you were sent to North Africa to participate in the fighting that took place between May 1943 and January 1944. You were then transferred to Corsica, France, in August 1944.

That same month, you participated in the Allied landing on the beaches of Saint-Raphael in Provence as part of Operation Dragoon. Your division then headed north toward the Rhone Valley until you reached Lyon, where you were stationed at the new American air field in Ambéries-en-Bugey. You stayed there for two years and took part in several battles to defend this important air field where planes loaded with supplies would take off to the front.

Captain Ernest Hollings, for your courage in action, you were decorated with the Bronze Star Medal and the European-African Middle Eastern Campaign Medal with 5 bronze stars.

You entered into active duty with the U.S. Air Force on December 24, 1943, as a bombardier. After completing your training at the air force base near Liberal, Kansas, you joined the 719thth squadron of the 449th Bombardment Group of the 15th Air Force. 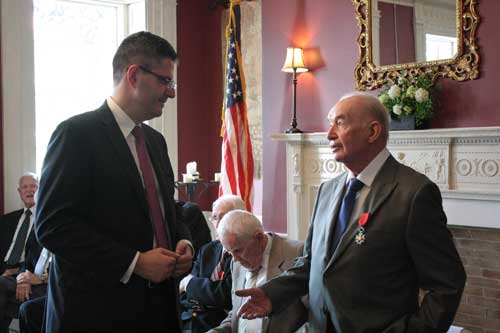 The role of the 449th Bombardment Group was strategic. Its main objective was to attack enemy oil refineries, communication centers, and airplane production factories.

You completed 35 missions between August 1944 and January 1945 in Italy, Germany, and Austria as well as in the South of France. Through your operation tactics, your group enabled the landing of Allied troops on the beaches in Provence on August 15, 1944, as part of Operation Dragoon. You also intervened against enemy fortifications built on the port of Toulon. You completed a total of 11 missions in France in 1944 and contributed to the destruction of enemy defenses.

Captain Alexander Molnar, for your participation in these bombardment operations, you were awarded with the Distinguished Flying Cross as well as the Air Medal with three clusters.

You were drafted into the service in July 1941. Following your cadet training, you were commissioned on August 30, 1943, as a Second Lieutenant and later joined the 492nd Bombardment Group of the 859th squadron as a pilot of a B-24 type aircraft.

On April 8, 1944, you were sent to the European Theater of Operations where you were stationed on a Royal Air Force base near Norfolk, England. From there, you completed several missions to bomb military targets in Germany, as well as in France, where you destroyed launch sites of the V-1 and V-2 flying bombs and other strategic points during the Allied landing in Normandy. Among the 31 missions that you completed, 14 of them were carried out between May and July 1944 on French soil.

Due to the high loss of human life during these missions, your squadron was dismantled. You were then transferred to Grantham, England, to help train B-24 pilots. During a flight, you were injured when your aircraft collided with another plane.

First Lieutenant Ernest Haar, for your courageous participation in these bombing operations, you were honored with the Distinguished Flying Cross, the Air Medal with three oak leaf clusters, and the European-African Campaign ribbon.

You landed on the beaches of Normandy at the end of August 1944 and were assigned duties with the Red Ball Express as a motor transport officer, helping to transport ammunition, fuel, food and water to combat units on the front lines.

You were then sent to the East of France where you participated in fighting in the Moselle, in the cities of Nancy, Moyenvic and Metz. Then, you continued on toward the Ardennes where the fighting conditions were even more difficult due to the particularly brutal winter.

After being treated for a wound received by a piece of mortar, you left for combat in January 1945 and were among those who crossed the Siegfried line. You went to Germany, Austria, and eventually Czechoslovakia.

Then you returned to France to join the 101st Division in taking Fort Jeanne d’Arc near Metz, one of the last occupied strongholds in the spring of 1945.

First Lieutenant Stanley Wapinski, for meritorious service in connection with military operations and for the wounds you received, you were awarded the Bronze Star Medal. You also received the Purple Heart and the EAMET Medal with four campaign stars.

On July 18, 1944, you landed at Omaha Beach, at the heart of the Normandy landing, where took place some of the fiercest fightings of the war. From there you were stationed in Picanville and Saint-Dizier before heading north to Belgium in 1945 with the Allied forces.

Sergeant Joseph Jones, for your bravery in these actions, you received the Good Conduct Medal as well as the European-African-Middle-Eastern Campaign Medal.

You joined the U.S. Army on January 9, 1943, and were assigned to Company A of the 166th Engineer Combat Battalion.

You arrived in Scotland and went on to England in early 1944, before landing in Normandy a couple of days after D-Day. You took part with bravery in the Battle of Normandy, one of the key and fiercest battles of the Second World War. Your mission was to clear minefields and blow up bridges in particular. You also participated in several fightings.

After Saint-Lô in Normandy, you moved on to the Loire region, between the cities of Blois and Orléans, where you were responsible for blowing up bridges to stop enemy troops from launching any counterattacks. In June 1944, you went on to fight in the Ardennes, Germany, and Central Europe.

Private First Class Leon Jones, for your participation in these combats, you were awarded the European-African-Middle-Eastern Campaign medal with 4 bronze stars, the Good Conduct Medal, the Distinguished Unit Badge and the Victory Medal.

You entered the military on December 20, 1943, and were assigned to Company K of the 119th Regiment in the 30th Division as a rifleman.

After arriving in England in June 1944, where you received further training, you were sent to France on July 25, 1944, to take part in one of the most difficult battles in Normandy: the battle of Saint Lô that ended with the liberation of the city.

You continued fighting across France and crossed the Seine in August 1944, the Meuse in September 1945, then went on to cross the defensive enemy lines into Belgium, then Holland, and finally Germany in November 1944. There, you fought elite SS units that could not stop you from crossing the Rhine.

Private First Class Richard Jolley, for your meritorious achievement in ground combat as well as for the wounds you received in France and Germany, you were awarded the Bronze Star Medal, the Purple Heart, and the EAMET Medal with 4 bronze stars, among others.