Published on August 2, 2013
Reception on the occasion of the presentation to Dr. William Arceneaux of the Commandeur des Palmes Académiques insignia. Speech by Ambassador François Delattre

Read more on this event. 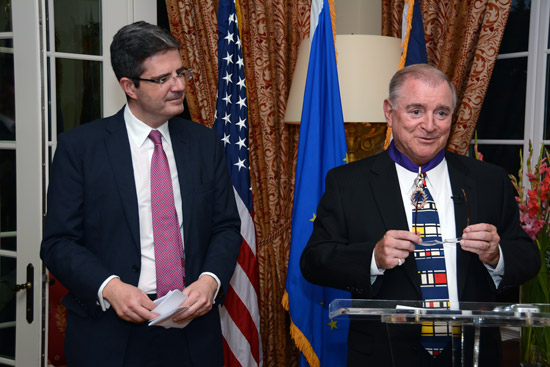 I would like to extend a warm welcome to Dr. Arceneaux’s friends who have joined us here tonight to show their support and admiration, with a special word of thanks to the members of the Congress and to my fellow-ambassadors representing French-speaking countries in Washington.

I believe this ceremony and your presence this evening say a lot about the key role played by Louisiana in our great French-speaking family.

I had the opportunity to meet you a number of times during my trips to Louisiana, notably in 2012 in Lafayette, at a moving event dedicated to La Francophonie and the Fondation Louisiane. And I will never forget your warm welcome there.

Among many other things, you are a distinguished Visiting Professor of History at Tulane University and Director of the Foundation for Excellence in Louisiana Public Broadcasting.

You were Louisiana’s first Commissioner of Higher Education from 1975 to 1987, and the only professional to date to head both national associations of higher education, one in the public sector and the other in the private sector.

You served as a Member of the American Committee on the Bicentennial of the French Revolution, and you are on the Board of Directors of the French-American Chamber of Commerce, Gulf Coast Chapter.

For your exemplary commitment to the “French language Renaissance” in Louisiana, you were awarded the Francophone Ordre de la Pléiade and the French Ordre des Palmes Académiques, with the ranks of Chevalier and then Officier (2008).

You were born in Scott, Louisiana, with Canadian and Acadian roots, and you have always been true to your origins.

So it should come as no surprise that back in the 1960’s you were part of the Louisianans from Cajun country who launched a movement to preserve and revive their French-speaking identity, which was also for you a way of being open to the world.

And your election as CODOFIL president in 2011 opened a decisive new chapter in Louisiana’s embrace of its French future. Laws passed by the Louisiana state legislature, notably at the behest of your friend, Senator Eric Lafleur and the French-speaking legislators group, have lent support to what we call the franco-responsabilité process.

Among your many accomplishments in this position I would like to mention a major program that you launched: Escadrille Louisiane. Inspired by the adventure of U.S. Air Force pilots who in 1916 trained in France with the Lafayette Squadron, you proposed that France welcome and train Louisiana’s future French teachers. And this program is a great success story.

This Ecadrille Louisiane project will therefore make it possible, year after year, to prepare teachers who, together with teachers from other French-speaking countries, are able to respond to the growing demand for quality public education in French. Thirty or so institutions now provide French immersion programs for a steadily growing number of students (5,000 students at present), while approximately 45,000 students are also taking French as a second language.

Dr. Arceneaux, your efforts to promote the international mobility of students has been a constant priority throughout your career.

President Bill Clinton got it right when, in 1993, he appointed you as chair of the Board of Directors of SallieMae Corporation, the nation’s largest provider of student loans.

You are also one of the founders of La Fondation Louisiane, a not-for-profit foundation dedicated to providing scholarships for students studying the French language every year. And you initiated many university collaborations between Louisiana and France, leading to exchanges of students, co-diplomas and scientific partnerships.

This year, you also prompted the creation of a French-American Chamber of Commerce grant, which will support a business project in French.

So your commitment to promoting mobility and exchanges generates cultural, academic, research as well as economic momentum. It’s about language, culture and values, but it’s also about research, innovation and job-creation.

Ladies and gentlemen, the Ordre des Palmes Académiques is as I said one of France’s highest awards, and the rank of Commandeur is truly exceptional – reflecting Dr. Arceneaux’s exceptional merit and extraordinary accomplishments. Few have received this honor since the Order’s creation by Napoleon Bonaparte in 1808. To give you an example, on July 14, 2012, only seven people in the entire world were promoted to the rank of Commandeur.

Cher Dr. William Arceneaux, you are the third Louisianian to be awarded this order’s highest rank, after James Domengeaux, CODOFIL’s first president, and Cecil Taylor, the first chancellor of Louisiana State University.

So it is now my privilege, on behalf of France, to bestow upon you this award.