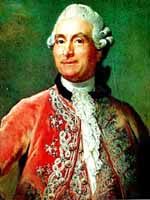 Charles Gravier, count of Vergennes, was born in Dijon, Burgundy, in 1719. His uncle, the reknowed diplomat Chavigny, taught him the complexities of foreign affairs. In 1750 Louis XV named Vergennes the Minister to the Elector of Tréves. In 1754 he was appointed ambassador to the Sublime Port in Constantinople. There he established himself as the principal French diplomat for Affairs in the Middle East. Criticized at court for having married a woman below his social stature, Vergennes lost his position in 1768. He was called back to diplomatic service by Broglie, head of Louis XVI ’s secret diplomacy corps, after four years of forced retirement. He was later appointed ambassador to Sweden. In 1774, he became Minister of Foreign Affairs, a position he occupied until his death in 1787. Careful to "contain within reasonable bounds domination of the British" as he wrote in a report on December 8 1774, Vergennes became the principal French supporter of the American Revolutionaries.
top of the page
Discover FrancoFiles,
the NEW podcast of the Embassy of France!
Tweets by @franceintheus