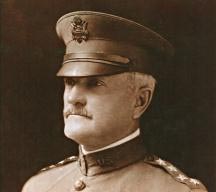 When John Joseph Pershing landed at Boulogne in France, on June 13, 1917, he already had a prestigious career behind him. Born in 1860, he had attended Nebraska University and later taught at West Point. He fought the Apaches with the 6th Cavalry before commanding Sioux scouts in the Dakotas. He further distinguished himself during the campaign against Cuba in 1898; (in 1903, he was ordered to the Philippines to put down the Moros rebellion.) Appointed military attaché to Japan in 1905, he was promoted to Brigadier-General the following year. He then returned to the Philippines as Governor. In 1914, he directed the campaign against Pancho Villa, but just as he was to assume command of the troops, he received orders to go to the battlefields of Europe, which was now in the midst of World War I. Despite his lack of experience in large-scale conflicts, he was more than equal to the task.
top of the page
Discover FrancoFiles,
the NEW podcast of the Embassy of France!
Tweets by @franceintheus