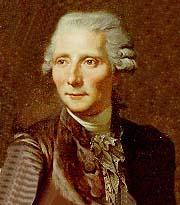 Pierre-Augustin Caron de Beaumarchais, a man of letters and an adventurer was born in Paris in 1732. The son of a clock-maker, Beaumarchais was introduced into society by the banker Pâris-Duverney. Knighted by the King at age 29, Beaumarchais became famous for his plays The Barber of Seville, and later The Marriage of Figaro. Mozart based two operas on these comedies. For several years, Beaumarchais conducted secret missions for the Count of Vergennes, the King’s Secretary of State and a great champion of American independence. In December of 1775, Beaumarchais wrote to Louis XVI to request money for the American Revolutionaries. For two years, more than three million pounds were discreetly passed on to Hortalés & Compagnie, a front company created to filter money to the Americans. The Spanish, happy to support those fighting the British, also gave a million pounds. The money, used to buy guns and ammunition, was delivered to the Continental Congress in the beginning of 1777. Because of his involvement in another arms smuggling affair, Beaumarchais was exiled at the start of the French revolution. He didn’t return to France until 1796, where he died three years later.
top of the page
Discover FrancoFiles,
the NEW podcast of the Embassy of France!
Tweets by @franceintheus