Sam Palmisano Chevalier of the Legion of Honor

It is a great pleasure and honor for Sophie and me to welcome you today to our Residence. We are gathered here this afternoon to honor one of the world’s most remarkable business leaders, who is also a great friend of France and an exceptional individual, Samuel Palmisano.

I would like to thank Sam Palmisano’s family and friends who have joined us here tonight to show their support and admiration, with a special word of appreciation to his wife Gaier and their daughter Cary, to whom I also want to pay tribute.

A warm word of welcome also to your colleagues at IBM Christopher Padilla and Didier Barbé. Actually I should recognize by name each and every one of you. 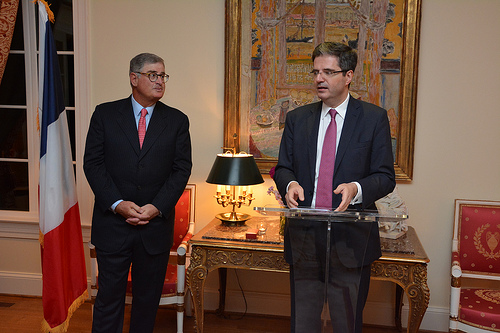 Before proceeding with the ceremony, I would like to say a few words about the award I will bestow upon Samuel Palmisano. The Legion of Honor was created by Napoleon Bonaparte in 1802 to reward extraordinary accomplishments and outstanding services rendered to France. It is France’s highest distinction and one of the most coveted in the world.

You have accomplished so much that it is difficult to briefly sum up all your outstanding achievements.

You were born in Baltimore, Maryland, into an old family whose roots date back to the 18th century. Your father owned an automobile repair business in Baltimore. After graduating from Johns Hopkins University with a bachelor’s degree in history in 1973, you were hired at IBM’s Baltimore office as a sales representative.

With your winning personality, intelligence and vision, you immediately became a successful salesman at IBM.

Actually you reinvented the way IBM sold its computers by getting software companies to write programs before the computer was ready to market. IBM’s then-CEO John Akers later recalled you as the best executive assistant he had ever had.

In 1991 you were sent to direct IBM’s operations in Japan, and were instrumental in bringing the ThinkPad to the Japanese market and making it a huge success. And soon after, at a time when IBM was doing less well in America, you were named president and then CEO of the Integrated Systems Solutions Corporation unit, which you helped expand significantly in less than 3 years (the unit grew from $15 billion in 1993 to $23 billion by 1996).

As head of IBM’s Entreprise Systems Group, where you were promoted soon after, you again proved your prescience by successfully advocating for open-source software standards rather than proprietary standards as a way to unify all of IBM’s hardware and software offerings. You helped IBM maintain significant growth despite the slump that was affecting high-tech businesses worldwide at that time.

It was therefore no surprise that you were named the new president and COO of IBM in 2000, then its Chairman and CEO two years later. Under your leadership, you transformed IBM into a globally integrated enterprise, pursuing your goal to create hardware, software and services that worked seamlessly together, in order to make IBM a computer services-on-demand company. You also made the decision to strategically refocus IBM to make it the world’s largest consulting firm.

Integrating technology and services, “business to business” has been your trademark. Innovative ideas are your way of thinking. And creating a corporate culture that would make all IBM employees feel confident they were working for a great company, was your way of managing.

And you succeeded brilliantly, making IBM the world leader in information technology that it is today.

Under your leadership, IBM’s total income has exceeded $100 billion, with more than 430,000 employees in 107 countries.

In the U.S., it is the second-largest employer and the most innovative company. In 2012, for the 20th year in a row, IBM obtained the highest number of patents in America. 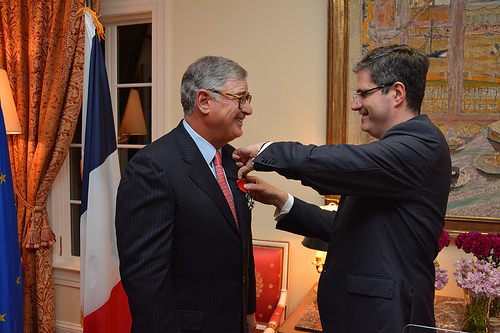 Among your outstanding achievements, I’d like to underline the great relationship between IBM, you and France. In 2014, IBM France will celebrate its 100th anniversary.

It works with more than 1,500 small businesses and 3,000 other commercial partners, bringing to more than 33,000 jobs the total it is supporting.

IBM’s commitment to France and your continued engagement with my country has one main driver: innovation. In France, IBM has found a land of innovation, partnering with dozens of innovative and engineering companies (like STMIcroelectronics, CEA Leti, Altis International). This should come as no surprise, as innovation is France’s number 1, number 2 and number 3 priority.

IBM has also built and developed many clusters, bringing together the industry, public research labs and some of the best French universities.

IBM France has also worked closely with the French government to create innovative solutions for a wide variety of projects, such as the partnership between IBM and the Employment Agency (“Pôle Emploi”), to secure the data collected by the agency.

Beyond Sam’s career and his personal commitment to expand IBM in France, France pays tribute today to an extraordinary visionary.

It was you, Samuel, who introduced the “Smarter Planet” agenda, which emphasizes how the world’s systems and industries are becoming more interconnected and intelligent. It was also you who coined the “Globally Integrated Entreprise” concept to characterize the new type of 21st-century company, able to locate functions anywhere in the world, based on the right costs, skills and environment.

It therefore comes as no surprise that you are a member of the American Academy of Arts and Sciences and that you have received countless prestigious awards.

To take just one example related to my country, you were made Docteur Honoris Causa of HEC in France, which says a lot not only about your personal success story but also about your strong interest and commitment to one of the best French business schools. 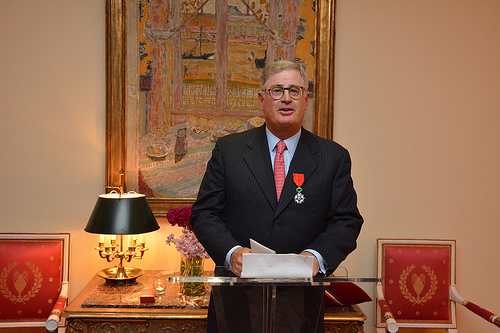 Today, we are very pleased to honor a true game-changer, driven by his passion for innovation, whose interest in France has always been strong. I know it’s still the case in your current position as independent advisor for Bloomberg LP. And I know how committed you are to promoting better education in order to succeed in a globalized economy and to help shape a better world.

So on behalf of the President of France President François Hollande, it is a great privilege for me to bestow upon you the insignia of Chevalier of the Legion of Honor for your many accomplishments during your successful career at IBM, as well as for your personal commitment to French-American friendship. I will now proceed in French: