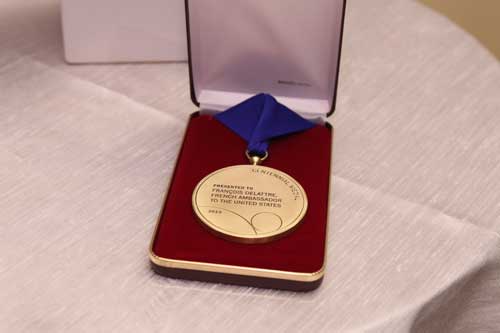 Thank you so much Paul for your words that are much too kind. Thank you Antonin for your warm welcome. It’s an immense honor for me, on behalf of the French government, to receive the “Colombia University Maison Française Centennial Medal”.

I am deeply humbled tonight, and as you know humility is not exactly the signature trait of a Frenchman …

Dear Friends, this award means the world to me and to France. I would like to express my warmest thanks to the Maison Française Board Chairman Paul LeClerc, its Director Shanny Peer and its Advisory Board members for honoring through me the country I represent, a country that has with each and every one of you a true love affair and that owes you so much.

France, its language and culture would simply not be the same without your support, your passion, your joie de vivre. I believe that France is part of your DNA and that you are part of ours.

So tonight, on behalf of France and the French government, I’d like to extend my deep gratitude to the leadership and Board of the “Maison Française”, but also to the Columbia faculty and staff, and to the many friends and partners of “la Maison Francaise”. 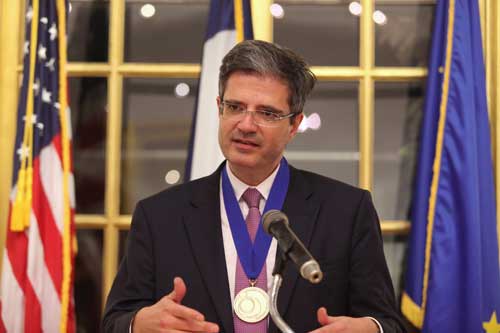 As you said so well, mon cher Antonin, the “Maison Française” has become a “home”, to Columbia students and to so many of us.

As we are celebrating the Centennial of Columbia’s Maison Française, I want to pay tribute to all those whose commitment and hard work have made this great success story possible.

I would also like to pay tribute to the thousands of Columbia students, alumni, professors and staff, who came to the aid of France during World War I and World War II, many of them as volunteers even before the U.S. joined the war.

Beyond our historic bond, tonight’s award celebrates the deep and growing academic and cultural exchange between our two countries.

As Ambassador, promoting academic and university partnerships between our two countries is one of my top priorities. 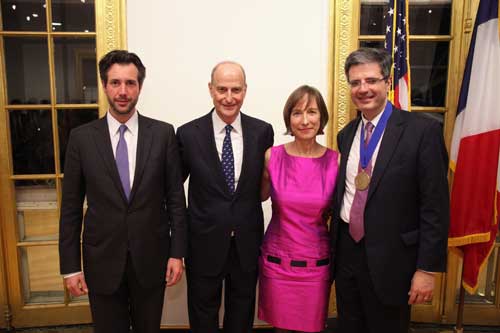 Every day, with my team, we conclude or help conclude an agreement between American and French universities and grandes écoles for exchanges of students, scientific partnerships and incubators’ collaborations (…).

Well, ladies and Gentlemen, Columbia University is in many respects the flagship of this growing movement. And the “Maison Française” is in many ways its soul.

At Columbia University, the Maison is today a major player in promoting French culture and francophone studies in America. I want to thank those at Columbia University and beyond who continue to make this collaboration shine among many others: Robert Paxton, Antoine Compagnon, Pierre Force, Bachir Diagne, Emmanuelle Saada, Vincent Debaene, Pascale Hubert-Leibler, Pierre-Andre Chiappori, Mamadou Diouf, Guy Sorman, Henriette Beillis, Pauline Brown (new Chair of LVMH), John Young and our wonderful sponsors and of course, the members of Maison Francaise Advisory Board: Paul LeClerc, Jeanine Parisier Plottel, Domna Stanton, Elisabeth Ladenson and, our dear friend, the late Phil Watts.

I would also like to especially thank you, dear Shanny, for your remarkable achievements as head of the Maison Française.

So my warmest thanks again to each and every one of you, my warmest wishes for the next hundred years of the Maison Française and if I may