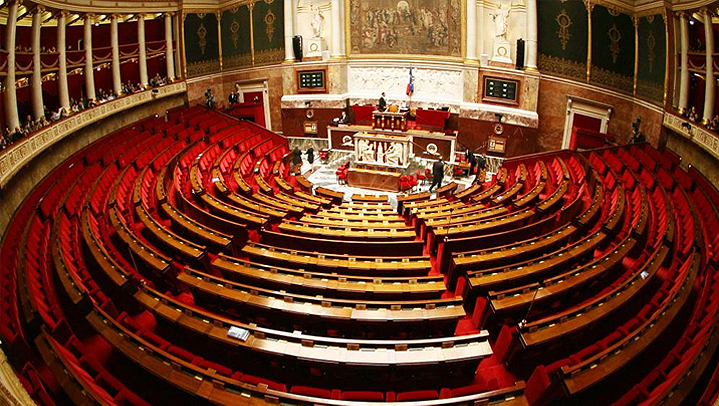 The Constitution of 4 October 1958 provides the institutional basis for the Fifth Republic. It has been amended several times to institute election of the President of the Republic by direct universal suffrage (1962), incorporate a new title defining the criminal liability of members of the Government (1993), establish a single parliamentary session, enlarge the area of application of the referendum (1995), transitional provisions relating to New Caledonia (1998), establishment of European Economic and Monetary Union, equal access of men and women to elective office and positions, recognition of the jurisdiction of the International Criminal Court (1999), shorten the Presidential term of office (2000) to 5 years, and the reinstitution of Parliament back into the heart of the democratic process and the limitation of the President to two consecutive terms of office (2008).

President of the Republic

The Head of State is elected for a five-year term by direct universal suffrage. Emmanuel Macron became the eighth President of the Fifth Republic on May 7, 2017.

The President of the Republic appoints the Prime Minister and, on the latter’s recommendation, appoints the other members of the government (article 8 of the Constitution). He presides over the Council of Ministers, promulgates Acts of Parliament and is Commander-in-Chief of the Armed Forces. He may dissolve the National Assembly and in an emergency exercise special powers (article 16).

Parliament is formed of two assemblies:

the Senate is elected by indirect universal suffrage for a six-year term (reduced from nine years in 2003). The house is renewable by one-third every three years. The last election took place in September 2014.

The two assemblies supervise the Government and pass legislation. In the event of disagreement on a law, the National Assembly makes the final decision.

The Senate has 348 senators affiliated with the following groups as of September 2014:

An illustration of the Senate’s political groups is available here.

The Constitutional Council, composed of nine members, is responsible in particular for overseeing the proper functioning of elections and for ruling on the constitutionality of organic laws and legislation submitted to it.

The "guardian of individual liberty" (article 66 of the Constitution), the French legal system is organized on the basis of a fundamental distinction between civil courts, with jurisdiction in disputes between private individuals or bodies, and administrative courts, with jurisdiction in all cases involving some form of dispute between a private individual or body (company, association, etc.) and a public body.

There are three types of courts

The highest judicial body is the Cour de Cassation which decides appeals on points of law and procedure and can set aside or quash judgements and remit cases for rehearing to one of the 35 courts of appeal for retrial.

The Court of accounts

The Cour des Comptes, formed in 1807, is a judicial authority in financial matters and is independent of both legislature and executive.

Today, its role is to apply mandatory financial verification to several categories of institution, such as central government, national public corporations, social security bodies (since 1950) and public services (since 1976).

The Senior Judge of the Cour des Comptes, who is appointed by decree issued by the Council of Ministers, cannot be recalled, as is in fact the case for all judges sitting in the court of auditors. The court is assisted by a prosecutor’s department headed by a public prosecutor, which acts as an intermediary between court and government.

The organizational structure comprises seven judicial bodies (the various divisions of the court), each of which has approximately thirty judges and rapporteurs: the distribution of powers among the seven divisions generally follows sectoral lines (for example, finance, health and social security, and so on).

The Cour des Comptes itself defines its audit programme entirely independently. It is also vested with very broad powers of investigation.

The missions carried out by the Cour des Comptes fall currently into three categories: verification of the compliance of accounts, verification of management, and provision of assistance to Parliament and the government.

It carries out checks on the correctness of public accounts. It analyzes the overall accounting balance and has as its main task, on the basis of an examination of the accounts and supporting documentation, that of verifying that revenue has been collected and payments made in compliance with accounting rules.

In carrying out its management audits, the Cour also verifies that public funds have been correctly applied. Such checks may be carried out in connection with an evaluation of the financial statements submitted by accountants or by direct analysis of the management of the officers responsible for the disposition of funds.

This form of verification has gradually been extended to the accounts of social security bodies, followed by those of public services. The Cour also makes known its views on the competence with which public services are administered.

It also has powers to verify proper application of public grants and subsidies. In 1991, this mission was extended to cover organizations appealing for charitable donations from the general public.

Finally, the Cour des Comptes cooperates with the government, and more particularly with Parliament, in verifying the performance of the budget, doing so in a number of ways.

Firstly, the Senior Judge may lay the court’s findings and comments before the relevant parliamentary committees (finance committees and special commissions of enquiry).

In addition, the committees of both houses may also entrust the court with specific enquiries into the management of bodies over which it has a power of inspection.

Lastly, the Cour des Comptes regularly publishes a number of reports: an Annual Report and special reports, which are made public; a report on the performance of the budget laws for the previous year, which is laid before Parliament; and, since 1995, a report on all audited social security bodies.

An average of nearly 700 reports are produced by the Cour des Comptes each year.

is the supreme administrative court and court of final appeal on the legality of administrative acts. It advises the government on draft legislation.

Source: Profile of France; printed by the French Ministry of Foreign Affairs

President of the Republic