Professor Jeong KIM Chevalier of the Legion of Honor

It is a great pleasure and privilege for my wife Sophie, for my team and for me to welcome you all tonight to the French Embassy on this very special occasion, as we are gathered here this evening to honor Professor Jeong Kim, one of the world’s most remarkable business and innovation leaders, who is also a great friend of France and an exceptional individual.

I would like to thank Jeong Kim’s family, friends and former colleagues who have joined us here tonight to show their support and admiration, with a special word of appreciation to his wife Mrs. Cindy Kim, to whom I also want to pay tribute this evening and their daughter Christine. 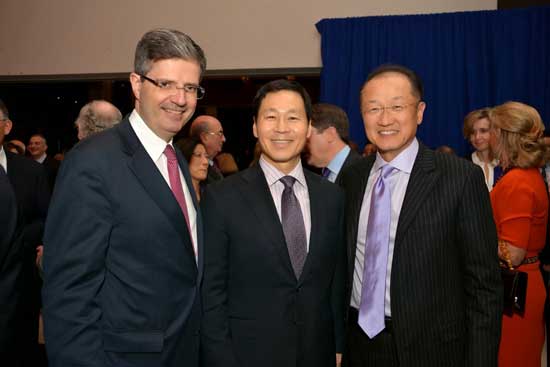 I would also like to recognize Philippe Camus, who is the Chairman of the Board of Alcatel-Lucent and one of the most respected and successful business executives in France and worldwide. Philippe and his wife Betty are two close friends of Sophie’s and mine.

A warm word of welcome also to Bell Labs President Emeritus Dan Stanzione and Arun Netravali and all the representatives of Alcatel-Lucent and the Bell labs who are here with us tonight.

Before proceeding with the ceremony, let me say a few words about the award I will bestow upon Professor Kim. The Legion of Honor was created by Napoleon Bonaparte in 1802 to reward extraordinary accomplishments and outstanding services rendered to France. It is France’s highest distinction and one of the most coveted in the world.

You were born in Seoul, South Korea and came to the United States with your family at the age of 14. Despite the language barrier, which you successfully overcame, you did extremely well in high school and won a scholarship to study at Johns Hopkins University. There you earned your degrees in Electrical Engineering and Computer Science in only three years.

During your time at the University, you worked for a computer startup called Digitus, where you soon became a partner, showing – very early on – a sense of entrepreneurship that is clearly part of your DNA, along with a deep sense of public duty.

Indeed, just after graduating from college, you demonstrated a strong commitment to your adopted country and joined the US Navy where you served for seven years, as an officer on a nuclear submarine. While still in the Navy, you earned an additional graduate degree in Management from Johns Hopkins University.

Upon returning to civilian life, you spent a short time working as a consultant for Sachs Freeman Associates. You then chose to apply your naval background and worked as a contract engineer for Allied Signal at the Naval Research Laboratory, where you participated in the development of satellite systems. At the same time you earned a doctorate in Reliability Engineering from the University of Maryland, the first doctorate in that field awarded by this very prestigious university.

In 1992, you founded Integrated Systems Technology, a manufacturer of networking equipment. You pioneered the development of a revolutionary technology for wireless applications, which became key to the modernization of telecommunications systems in today’s digital market. Your company, which was renamed Yurie Systems in 1996, soon became a world leader in advanced data transmission.

It had its Initial Public Offering in 1997 – just five years after you founded it – with no debt and no venture backing. Three months later, Business Week named Yurie Systems America’s Number One Hot Growth Company.

In 1998 you sold Yurie Systems to Lucent Technologies for over 1 billion dollars and joined Lucent where you headed up multiple organizations, including Carrier Networks and Optical Network Group. As a true visionary, you were instrumental in defining and realizing the company’s strategic direction in broadband and optical networking.

In 2005 you became President of the iconic world-renowned Bell Labs at Lucent Technologies.

In many ways, Bell labs are to innovation what the Eiffel Tower is to Paris. They have developed a wide range of revolutionary technologies, including radio astronomy, the transistor, the laser, computer-related inventions, and I could go on and on.

As head of Bell Labs, you have strengthened this wonderful technological powerhouse and you have added to it a Franco-American touch, by taking advantage of the exceptional resources that France too has to offer with respect to innovation and entrepreneurship - after all, don’t forget entrepreneur is a French word!

During and after the merger between the American Lucent Technologies and the French Alcatel in 2006, your personal commitment to the operation played a critical role in the successful merging of the two companies’ R&D programs. 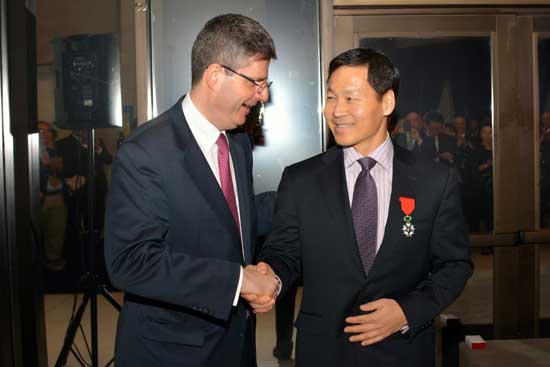 Building upon the tradition of the Bell Labs, famous for its Nobel Prizes and Fields Medals, you made sure to involve, and not absorb, the French expertise from Alcatel.

Indeed you have developed a wonderful relationship between the Bell Labs and France.

Under your leadership, the Bell Labs became a leading actor in French research in telecommunications.

You established many partnerships between the Bell Labs and French clusters and academic institutions, such as INRIA (the French Institute for Research in Computer Science and Control), the Institut Mines-Télécom Paris and the CEA (Commissariat à l’Energie Atomique).

You also added a new dimension to the Bell Labs’ activities in France by turning this research institution into an incubator, which supports the creation and development of many innovative startups in France. More broadly, you strengthened French research within Alcatel-Lucent, thus ensuring the vitality and strong position of French industry, in partnership with the American industry, in the field of information and communication technology.

It comes as no surprise that you are a member of the National Academy of Engineering and that you have received countless prestigious awards including the KPMG Piedmark High Tech Entrepreneur Award, the Ernst & Young Entrepreneur of the Year Award, and the American Academy of Achievement Golden Plate Award.

You also sit on many university, nonprofit and corporate boards, including at Schneider Electric, to take just one example related to my country.

On behalf of France’s President François Hollande, and in recognition of your exceptional accomplishments and exemplary commitment to French-American friendship, it is a great privilege for me to bestow upon you the insignia of Chevalier-Knight in the Legion of Honor.