The French Foreign Legion has inherited the traditions of foreign troops who have served France since the Middle Ages.

Every one has heard of the Scottish Guards of Charles the VIIth, the Swiss Guards of the Bourbon Kings, and Napoleon’s Polish Lancers.

Louis Philippe, "King of the French" created the French Foreign Legion on March 10, 1831.

Composed exclusively of volunteers aged between 18 and 40, with or without means of identification, the Legion was immediately involved in the conquest of Algeria before passing under Spanish control in 1835.

A second Legion was then created which fought in Algeria, in Crimea (1855), in Italy (1859) and in Mexico (1863). In Mexico, it won one of its greatest titles to fame: on April 30, 1863, at the Camerone Hacienda near Puebla, 3 officers and 62 legionnaires resisted 2,000 Mexicans. After a day of heroic fighting the last five survivors fixed bayonets and charged.

This battle, whose name adorns every Legion flag, remains the symbol of a mission carried out to the bitter end.

Then came the campaigns of Tonkin, Sudan, Dahomey, Madagascar and Morocco.

1914: the 1st World War. After very heavy casualties, the disbanded regiments were merged into one: the Foreign Legion’s "Regiment de Marche" headed by the famous Colonel Rollet, "the Father of the Legion".

World War I came to an end in France.

The Pacification of Morocco and the Middle East with the campaigns in the Rif, the Atlas and against the Druze. 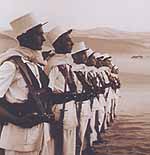 1939-1945: on the eve of the Armistice, the 11th Regiment of the Foreign Legion was decimated, rather than forced to retreat.

The 13th Half-Brigade (Battalion) of the Foreign Legion made history at Narvik and Bjervik in Norway, then accomplished another feat in 1942 at the famous Bir-Hakeim victory in Libya.

The Legion was then reunited and fought victorious campaigns in Tunisia, Italy, Provence, Alsace and Germany.

In Indochina, the 5th Foreign Infantry Regiment escaped from the Japanese grip.

1945: the Indochina war began. Every Foreign Legion regiment was represented on the battlefield, particularly in Phu Tong Hoa, the Colonial Road 4, and Dien Bien Phu, where they fought to the last man.

1954: the entire Legion was back in Algeria. Its regiments, at first in charge of security, were soon sending out major intervention forces. They took an active part in large scale operations and in border defense duties.

1962 to the present day: after leaving Algeria, the regiments regrouped in the south of France and Corsica, or overseas in Djibouti, Madagascar, Tahiti, and French Guiana.

In 1969-1970, the 2nd Foreign Parachute Regiment and the 1st Foreign Regiment took part in the Chad operations.

In May 1978, the 2nd Foreign parachute Regiment saved hundreds of European and African civilians in Kolwezi, Zaire, from certain death.

The Legion has paid dearly in human lives during combat and pacification operations in which France has been involved.

Foreigners by birth, the legionnaires have become Frenchmen by the blood they have spilled.