Read and watch video of the Tom kaplan ’s speech

It’s a great pleasure and privilege for our Cultural Counselor Antonin Baudry, for his staff and for me to be here with you tonight on this very special occasion, as we are gathered here this evening to honor an exceptional leader and individual who is also a treasured friend of France - Tom Kaplan.

It makes so much sense to host this ceremony here at the 92nd street Y, one of New York’s cultural icons. A place of education for everyone from infants to seniors, on topics from religion to sculpture. A true intellectual and artistic hub that says a lot about you Tom, as a leader of this unique institution who has been instrumental in building it.

I would like to extend a warm welcome to Tom’s Family and friends who have joined us here this evening to show their support and admiration, with a special word of appreciation to his wife Daphnee, their daughter Orianne and their son Leonardo. 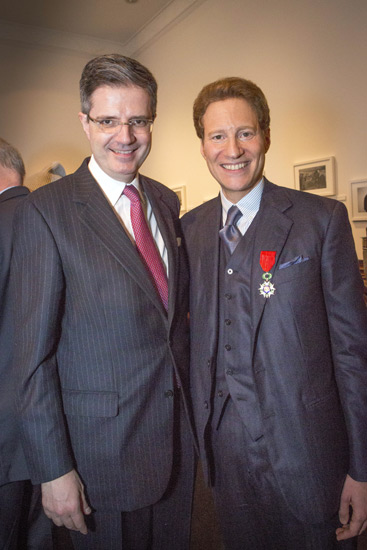 I would also like to recognize a couple of distinguished diplomats who are with us tonight - Alon Pinkas, Ambassador Wallace, Ambassador Barras from Switzerland - as well as the three members of the panel that will take place right after the ceremony: General Petraeus - another great friend of France, who is a source of admiration for many of us -, Marc Lipschultz and Alexander Navab. And I am glad to see many other friends, among them Malcolm Hoenlein, Christy Ferer, Ron Agam and Mark Medin.

I deeply regret I will be unable to attend the panel that you will be part in, as I have to rush back to Washington right after the ceremony due to the Ukrainian crisis.

Before proceeding with the ceremony, let me say a few words about the award I will bestow upon Tom Kaplan.

The Legion of Honor was created by Napoléon Bonaparte in 1802 to reward extraordinary accomplishments and outstanding services rendered to France. It is France’s highest distinction and one of the most coveted in the world.

Cher Tom, where shall I begin with such prolific and impressive activities and commitments?

Through your multifaceted life and your support for an incredible array of causes, I believe you are the very definition of a game changer and Renaissance man - a young Renaissance man : as Chairman of the Y, as an environmentalist in Brazil, as an entrepreneur, a historian, a philanthropist, an art collector and a politically engaged individual.

From your beginnings at Apex Silver mines to founding the Tigris Group and becoming Chairman and Chief Investment Officer of the Electrum Group, not only you have shown intense drive and initiative, but remarkably, you have always been early to the game – making choices that reveal astounding intuition and precision.

Your passions and efforts reach from the Y to France, Israel, and the jungles of Brazil. They affect children, the ill, endangered animals, and international relations.

Educated in Switzerland and England, you hold a Ph.D. from Oxford University and have used this education to support the common good around the globe and to make a difference.

Cher Tom, your tireless involvement relates to France in particular. As a student in Switzerland, your learned to speak French – I believe you speak French better than I do - and your passion for France and French history was kindled. From that moment on, your fascination with the revolutionary spirit that animates France grew stronger every year. Your love of France is also a love of France’s universal values, these values coming from the French and American revolutions and which are now part of our common DNA.

Your desire to preserve French culture has proven contagious: both your son Leonardo and daughter Orianne were born in Paris, and Orianne strongly declared herself French and refused to utter a word of English at her first 92Y class - bravo Orianne - and your youngest son, Emmanuel, is already learning French. You spread your passion for France to new educational communities and, with Daphnee, created the Recanati-Kaplan Intelligence Scholars program at Harvard’s Kennedy School of Government.

The program has brought France together with the United States and Israel to improve intelligence analysis and cooperation. And not long ago, you made an unparalleled contribution to light up French culture in new York by saving the French Embassy’s building.

Since 1952, the French Cultural Services has been housed at the Payne Wthiney Mansion on Fifth Avenue. It is a gorgeous Stanford White building from the Gilded age and was a wedding gift – not a small one! - from Olivier Payne to his nephew. The building thus united two great American families, both patrons of the arts.

The story goes as follows – Our emblematic headquarters in New York was in danger of being surrendered. The loss of this monumental building would surely have weakened France’s presence here. Thus, we came up with a solution to save our building and decided to create a French bookshop within it dedicated to French-American exchange and international dialogue.

At that moment, Tom stepped in. His exceptional gift allowed for the construction of this French bookshop in New York. And he has again shown his strong desire to promote education, critical thinking and debate for the French and American, ad more generally for all New Yorkers.

Visitors will find more than 12 000 titles, 3 000 of which are works translated from French to English. The space will open in the fall and we hope to see everyone there!

Cher Tom, your goals here for the Y, so well articulated, shape and inform our own at the French Embassy. The Y is a model for our own community space as it makes a point of including all people of any race or faith. It is a model of sharing, and inspires institutions worldwide to embrace inclusiveness and artistic exchange.

One example is the recent series Conversations with Chevaliers organized by the 92Y, the French Embassy and the Recanati-Kaplan Foundation. It highlights the contributions of artist and intellectuals from around the world who have received French governmental awards.

Your influence stretches far from the Y across the Atlantic, as you generously foster cultural learning abroad. You have often lent your Old Masters and Rembrandt paintings to the Louvre, where the Recanati-Kaplan Collection of Fine Art and Design will be showcased in its own exhibition in 2017.

I must note that it is one of the largest private collections of Old Masters and THE largest collection of Rembrandt and Rembrandt-school paintings in the world.

From the arts to nature, your passion to conserve drives you forward to new frontiers.

With Daphnee, you co-founded the Panthera Corporation, a charity devoted to preserving big cats and their ecosystems around the globe.

And in the remote Pantanal jungle region of Brazil, you are working to change the world.

Through Panthera, you acquire ranches that had previously slaughtered jaguars. You not only save the cats but also improve the lives of the ranchers, establishing for instance medical clinics and schools for their families.

For you Tom, supporting culture is a family affairs, as evidenced by your Sunday trips to the Y with Daphnee and the kids.

And you are part of our French family.

What sets you apart is that your voice is strong and clear. It tells us to commit to the things that impassion us, which is the best way to change the world. It reaches the ears of many people: New Yorkers, Americans, the French, Israelis, and global citizens everywhere.

So on behalf of France’s President François Hollande, and in recognition of your extraordinary accomplishments and exemplary commitment to French–American friendship, it is a great privilege for me to bestow upon you the insignia of Chevalier in the Legion of Honor.