On March 13, Ambassador François Delattre and Virginia Governor Terry McAuliffe signed an agreement on sustainable development. The partnership aims to develop scientific cooperation and economic development between France and the state of Virginia.

According to statistics, northern Virginia is projected to be one of the fastest-growing areas in the United States over the next 10 years. This growth provides a unique opportunity for economic development, but also creates challenges to develop and adapt housing, transportation, and energy. It is also a unique opportunity to develop solutions that incorporate climate and protection of natural resources, which will have a direct impact on local quality of life and attractiveness.

Between 2009 and 2013, French companies invested over $570 million in Virginia, making France the second-largest foreign direct investor in the state. 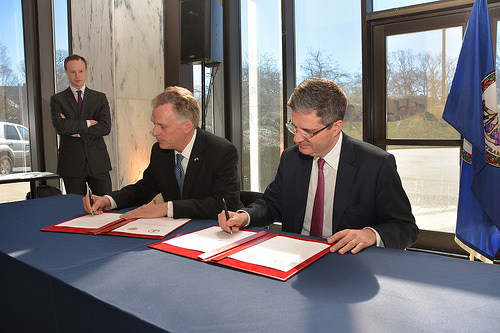 More than 10 CEOs of French companies were in attendance as well.