It is an immense pleasure and privilege for the Embassy Scientific Counsellor Mih-Hà Pham and for me to be with you this afternoon at the University of Virginia on this very special occasion, as we are gathered here today to honor an exceptional scientist and individual who is also an exemplary citizen of the world and a wonderful bridge between the United States and France, Professor Trinh Xuan Thuan.

I would like to thank professor Thuan’s family, friends and colleagues who have joined us here to show their support and admiration, with a special word of appreciation to his wife Linh, to whom I also want to pay tribute today. 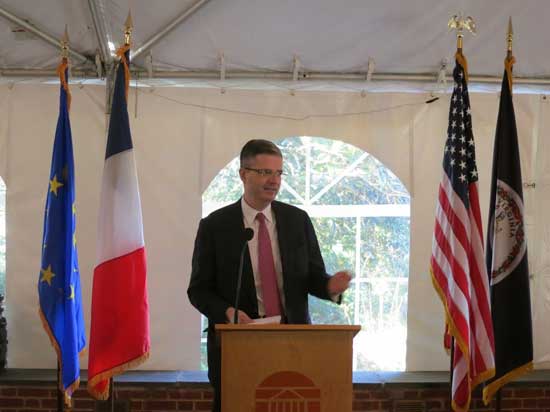 It’s a great privilege to have this ceremony at the University of Virginia. Not only because UVA is one of the most prestigious universities in the US and in the world, but also because this university was founded by Thomas Jefferson, a former Ambassador to France and such a great Francophile. So we French feel very much at home at UVA, and it is the perfect place to celebrate French-American friendship.

So I want to thank the representatives of UVA for their warm welcome. I had the pleasure of meeting President Sullivan a bit earlier and we discussed ways to strengthen the partnership between UVA and France. Promoting university partnership is actually one of my top priorities as Ambassador (…).

Before proceeding with the ceremony itself, let me say a few word about the award that I will bestow upon Professor Thuan. 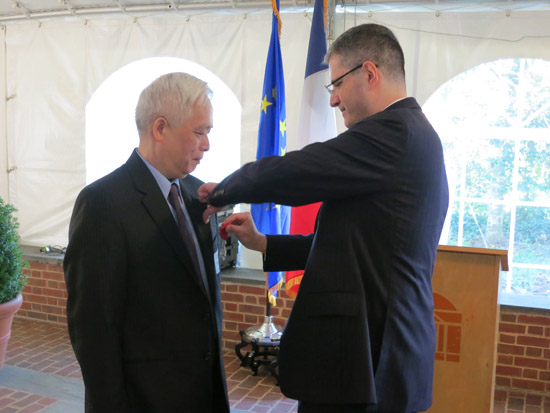 The Legion of Honor was created by Napoleon Bonaparte in 1802 to reward extraordinary accomplishments and outstanding services rendered to France. It is France’s highest award and one of the most coveted in the world, based on a decision taken by the President of France.

You were born in Hanoi, Vietnam, and at the age of 6 moved with your family to Saigon, the capital of what was then South Vietnam, where you attended the French high school Jean-Jacques Rousseau. So the French language and culture is truly part of your DNA and you have always cherished this heritage.

You then spent a year in Switzerland (1966-1967), at the Ecole Polytechnique in Lausanne, and continued your studies in the United States.

You obtained your Bachelor of Physics at the California Institute of Technology (Caltech) in 1970, then your PhD in Astrophysics at Princeton University in 1974, under the guidance of the eminent astrophysicist Lyman Spitzer, father of the Hubble Space Telescope in particular.

Since 1976, you have been a very distinguished professor of astronomy here at the University of Virginia, and actually you divide your time between the United States and France. As a guest professor at the University of Paris 7, but also at the Paris-Meudon observatory, at the Saclay department of astrophysics and at the CNRS’s Institute of Astrophysics of Paris, you have collaborated regularly with French scientists and as I said earlier you are a unique bridge across the Atlantic between our two countries. 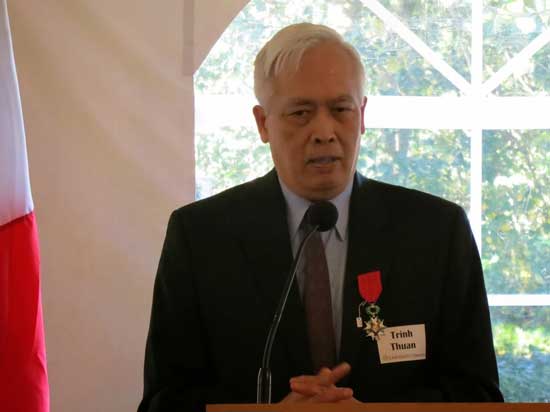 You are one of the leading astrophysicists worldwide and you are internationally recognized for your research on extragalactic astronomy and galaxy formation in particular. You are the author of more than 230 articles on the formation and evolution of galaxies, particularly dwarf galaxies, and on the synthesis of light elements in the Big Bang. Your articles are widely referred to worldwide.

For your astronomical research, you make use of the largest telescopes on the planet. At the end of 2004, thanks to observations made with Hubble, you discovered the youngest known galaxy in the universe (I Zwicky 18) – needless to say, a major discovery.

Cher Professor, you are not only an exceptional and universally acclaimed scientist; you also want to share your passion for astrophysics and the philosophical questions it raises. This is one of your trademarks and this leads you convey a deeply humanistic message, in line also with your personal history and your varied backgrounds. Furthermore your efforts to engage a broader public have helped attract young people to science and astronomy.

In this respect, along with teaching and conducting research at the University of Virginia, you teach a course at UVA called "Astronomy for Poets." In this course, students with non-scientific backgrounds have the pleasure of discovering the wonders of the universe in non-technical language.

You are also the author of many popular books, written originally in French. All of them won large audiences and have been translated in some 20 languages, including English. On a more personal note, as a great amateur fan of astronomy myself, I am an avid reader of your books such as “The secret melody”, “Chaos and Harmony”, “The Quantum and the Lotus” and we often discuss your books with a common friend of ours, Alain Malraux.

Throughout your career, you have received many awards. To give our audience just a few illustrations of them, you were the recipient of UNESCO’s Kalinga Prize in 2009 for your work in popularizing science. You then received the Kalinga chair award at the 99th Indian Science Congress. 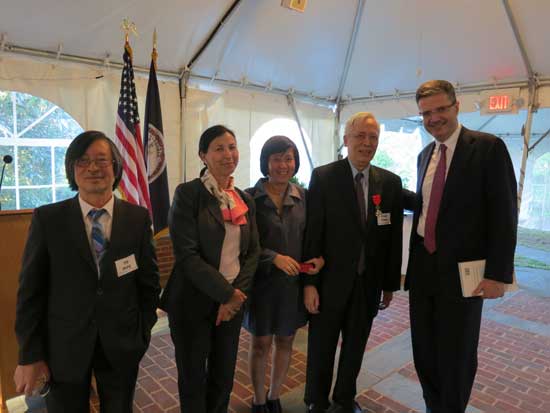 In November 2007 you received the Grand Prix Moron from the French Academy of Science for your book The Ways of Light: physics and metaphysics of light and darkness (published by Fayard). In 2012, you were awarded the Prix Mondial Cino del Luca from the Institut de France. This prestigious prize recognizes authors whose literary or scientific work conveys a modern humanistic message.

You are fascinated by the frontiers between science and religion, Buddhism in particular. This is one of the topics of your book “The Quantum and the Lotus”, that you published in 2001 with the French molecular biologist and Buddhist monk Matthieu Ricard. In the same vein, you are a founding member of the International Society for Science and Religion.

And you share Albert Einstein’s views when he said – and I quote: “If there is any religion that could cope with modern scientific needs it would be Buddhism”.

And Cher Professeur, you are a regular guest on television and radio shows in the U.S., France and other countries, as well as a frequent guest lecturer in many countries around the world.

Professor Thuan, in recognition of your extraordinary work, as a scientist and to reflect on the impact of science, and your personal commitment to French-American friendship, that is truly second to none, it is now my privilege to bestow upon you the insignia of Chevalier (knight) of the Legion of Honor.