Steven L. Dreyfuss, Chevalier of the Legion of Honor

Published on May 29, 2014
Speech by Ambassador François Delattre

Monsieur le Consul Général, cher Bertrand, whom I would like to thank for hosting us in this Consulate, a place that is particularly dear to my heart, as I was Consul General here myself a few years ago, 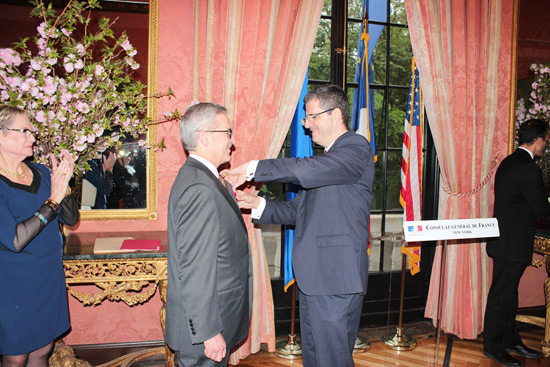 It is such a pleasure and a privilege to welcome you all tonight to the French Consulate on this very special occasion, as we are gathered here this evening to honor Steven Dreyfuss, an outstanding lawyer, one of the most prominent members of the French –American community in New York and in the country and an exceptional individual who is also a personal friend.

There could be no better day to honor Steve since it is his birthday today.

I would like to extend a warm welcome to Steve’s family, friends and colleagues who have joined us here this evening to show their support and admiration.

With a special word of appreciation to his wife Liliane, to whom I also want to pay tribute tonight, and their daughters Kate and Caroline.

I would also like to offer my warm greetings to the very distinguished members of the Union Internationale des Avocats, as you Steve are presiding over their meetings this week in New York. It is good to see among you several friends and familiar faces. I wish I could mention each and every one of you by name.

Cher amis, the Legion of Honor that I will bestow upon Steve Dreyfuss in a few minutes was created by Napoleon Bonaparte in 1802 to reward extraordinary accomplishments and outstanding services rendered to France, based on a personal decision by the President of the French Republic. It is France’s highest distinction and one of the most coveted in the world – and you know the long tradition of French modesty ….

Steve is a key player in the Franco-American friendship and let me start by saying that French-American relations, and this is good news, have never been stronger than they are today, as illustrated by President Hollande’s very successful state visit to the United States three months ago.

Speaking of state visit, it reminds me that of President Kennedy to Paris back in the 1960’s (…).

After brilliantly graduating from Princeton University and Columbia University Law School, in 1974 you began working as Assistant District Attorney for New York County, an impressive accomplishment for someone just starting out, and you held that position for 4 years.

In 1979, you joined the law firm of Hellring Lindeman Goldstein & Siegal LLP, where you remain a Partner to this day. Your love of France, and perhaps you will tell us a bit more about it, is very much part of your DNA and your personal history. Your junior year at Princeton was spent in France, where you studied at the Université de Paris and subsequently worked for Kodak-Pathé, the French subsidiary of Eastman Kodak.

You later spent another year in France at the Université de Touraine. This love and deep knowledge of our country, combined with your first-hand experience of French-American economic relationships, made you a natural candidate for taking on important responsibilities within the New York section of the French-American Chamber of Commerce, which plays a leading role in promoting French-American business ties.

For more than 20 years now, as legal counsel and then first Vice President of this first-class organization, you have been working tirelessly to strengthen economic cooperation between our two countries.

A pillar of the New York section of the French-American Chamber of Commerce, you took over as President in 2009, fulfilling the wish expressed by Serge Bellanger before he so sadly passed away. And here I’d like to greet Danielle Bellanger, the wife of the late Serge Bellanger and Elsa Berry, who was named President of the Chamber in 2011. Both are dear friends of Sophie’s and mine. I also see Martin Bishop and members of the Board of the Chamber. For more than a year, Cher Steve, you acted as Interim President with unfailing dedication and commitment, while still actively practicing law and contributing your expertise to the Union Internationale des Avocats as Regional Secretary for North America.

You know how appreciative and grateful your peers and colleagues have been for your incredible energy and enthusiasm. Let me acknowledge, tonight, this remarkable loyalty and consistency of yours, which have become – if I may – something of a personal trademark.

Indeed, your long-standing contribution to the activities of the Union Internationale des Avocats, the world’s oldest international association of bars, law societies and lawyers, only confirms this unbending integrity and steadfast convictions. Reflecting the common values and shared history of our two countries, the UIA defines the role of lawyers as guaranteeing the rule of law and citizens’ rights worldwide, and you have been a true leader in this very important mission.

After serving as Regional Secretary, Director of Commission and Chair of the Union’s Commission of Business Crime, you were elected President of the organization last year in Dresden, Germany, and you have been actively promoting the fair, humane vision of the legal profession that the UIA stands for. It is your intimate conviction that the rights of legal professionals, as defended by the UIA, are a prerequisite for our citizens’ fundamental rights.

This is the strong, courageous vision you have championed as head of the UIA, and all the members of this organization who are here with us this evening know how lucky they are to have you as their president.

I would also like to underline your enduring commitment to promoting the French language here in the United States, within the academic world in particular. As Chair of the Advisory Counsel for the Department of French and Italian at Princeton University, you have been a passionate advocate for supporting and developing French studies within the American higher education system with great success, since university and academic partnerships between our two countries are literally booming.

More broadly, this is your personal, generous way of ensuring multiple opportunities for young Americans and allowing them to study our language, discover French culture and possibly enroll in study-abroad programs.

As you yourself like to point out, the French language, history and culture have become a “second legacy” for you.

For the past forty years, as a true Renaissance man, have steadfastly promoted legal economic and cultural relations between France and the United States. So France, your second homeland, is particularly proud to honor you tonight.

On behalf of the President of the French Republic, and in recognition of your extraordinary commitment to French-American friendship, it is a great privilege for me to now bestow upon you the insignia of Chevalier in the Legion of Honor.