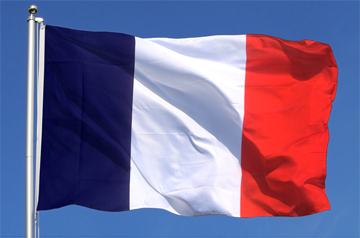 The "tricolor" (three-color) flag is an emblem of the Fifth Republic. It had its origins in the union, at the time of the French Revolution, of the colours of the King (white) and the City of Paris (blue and red).

Today, the "tricolor" flies over all public buildings. It is flown at most official ceremonies, both civil and military.

In the early days of the French Revolution, the three colors were initially brought together in the form of a cockade. In July 1789, just before the taking of the Bastille, Paris was in a state of high agitation. A militia was formed; its distinctive sign was a two-color cockade made up of the ancient colors of Paris, blue and red. On July 17, Louis XVI came to Paris to recognize the new National Guard, sporting the blue and red cockade, to which the Commander of the Guard, Lafayette, it appears, had added the royal white.

The law of 27 pluviôse, Year II (February 15, 1794), established the "tricolor" as the national flag. At the recommendation of the painter David, the law stipulated that the blue should be flown nearest the flagstaff.

Throughout the 19th century, the blue of the legitimist royalists contended with the three colours inherited from the Revolution. The white flag was re-introduced under the Restoration, but Louis-Philippe reinstated the "tricolor," surmounting it with the Gallic rooster.

During the Revolution of 1848, the provisional Government adopted the "tricolor," but the people on the barricades brandished a red flag to signal their revolt.

Under the Third Republic, a consensus gradually emerged around the three colours. From 1880 onwards, the presentation of the colors to the armed forces each July 14 came to be a moment of high patriotic fervour.

While the Comte de Chambord, pretender to the French throne, never accepted the "tricolor," the royalists ended up rallying round the national flag at the time of the First World War.

The constitutions of 1946 and 1958 (article 2) instituted the "blue, white and red" flag as the national emblem of the Republic.

Today, the French flag can be seen on all public buildings. It is flown on the occasion of national commemorations, and it is honored according to a very precisely-defined ceremony. The French flag frequently serves as a backdrop when the French President addresses the public. Depending on the circumstances, it may be accompanied by the European flag or the flag of another country. 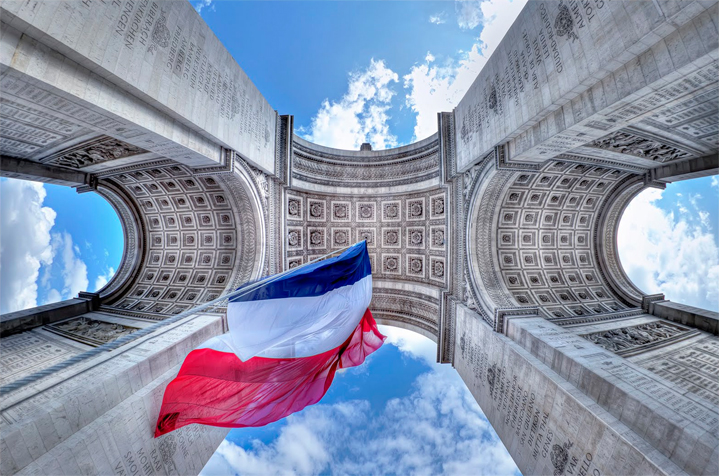