May I please request your attention for the national anthems. Many thanks to our pianist Mary Ann Huntsman, to Michael Steelman who will sing the Star Spangled Banner, and to Chloé Moore from the Castleton Festival who will sing La Marseillaise. 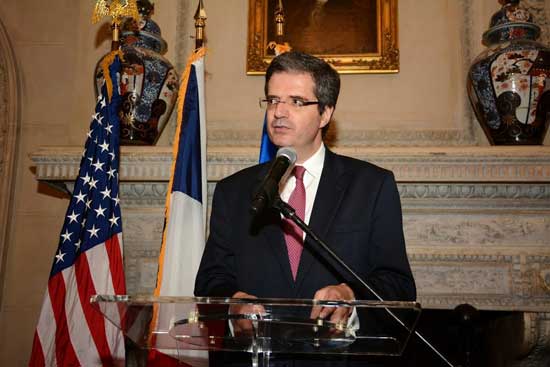 Justice and Mrs. Alito – it’s a great honor to have you with us this evening,

General Palomeros, Chère Madame – thank you so much for coming all the way from Norfolk to be with us tonight,

Representatives of the administration,

It’s a great pleasure and privilege for my wife Sophie, for my team and for me to welcome you all tonight to Anderson House for this very special occasion, as we celebrate together Bastille Day.

I want to start by expressing my warmest thanks to the Society of Cincinnati for so generously hosting us for a second year in this magnificent house, as our Residence on Kalorama is currently under renovation, with a special word of thanks to the President General of the Society of Cincinnati Ross Perry, his predecessor Admiral Masterson, the Society’s members of the Board and all its staff and volunteers whose dedication and hard work have made this event possible.

I cannot thank you enough for your welcome and for your commitment to French-American friendship, which is second to none.

GDF Suez, one of the leading energy companies in the world, represented by Julie Vitek 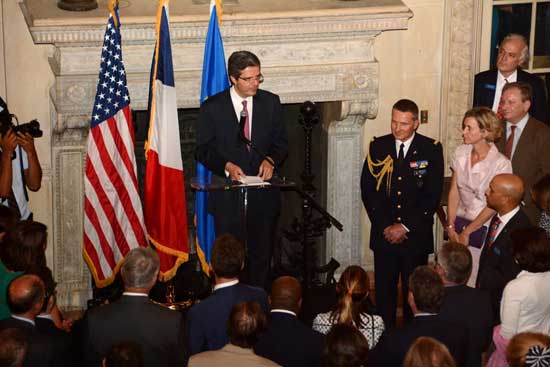 A few weeks ago, we celebrated the 70th anniversary of D-Day, and I had the privilege of participating in the very moving commemorations that took place in Normandy with President Hollande, President Obama and several other Heads of State and Government. This was one of the most moving experiences of my life, as I met with American veterans who are living testimony of the so many soldiers who risked and often sacrificed their young lives to restore our freedom. We owe them everything and we will never forget what they did for France and the world.

So today we remember that the Franco-American friendship is bound in blood, solidly anchored in our shared values, and that our two countries owe each other their very existence as free Nations.

We remember that from Yorktown and Lafayette to the battlefields of World War I and the beaches of Normandy, the United States and France have always stood shoulder to shoulder to defend and promote the values of freedom and democracy that we together gave the world more than 200 years ago. Here you can recognize the traditional and well-known French modesty…

After nearly four extraordinary years in Washington, it is an immense privilege to continue serving France – and French-American friendship – at the United Nations in New York, and I very much look forward to working with my friend Ambassador Samantha Power and the other Permanent Representatives at the U.N.

Sophie and I want to thank each and every one of you for your warm welcome upon our arrival as well as your support and for your friendship over the four years we spent in one of the world’s most beautiful cities. We will miss you all …but we will not be far away.

Thanks to all of you, my wife, our two sons and I enjoyed every minute of these four years here. Washington holds a very special place in our hearts. It is the city of our youngest son’s birth. And it is the last city where our eldest son will have lived with us before leaving home for college.

Your commitment, friendship and support have allowed us to open together a new chapter in the French-American friendship. The fact is that the relationship between our two countries has never been stronger than it is today, as illustrated by President François Hollande’s very successful state visit to the United States last February, followed by the important visit of Foreign Minister Laurent Fabius. 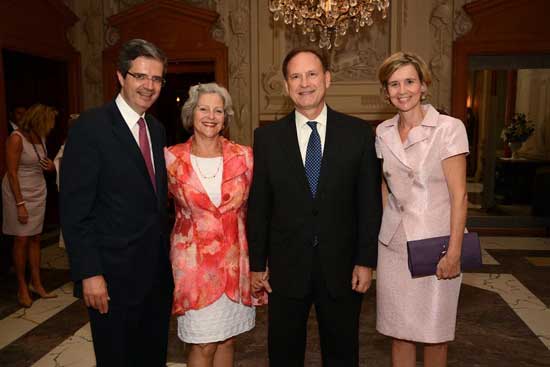 Let me give you a few illustrations of this :

The image of France in the United States has reached an historic high : according to a recent Gallup poll, nearly 80 % of Americans have positive views about France – compared to 34 % in 2003, at the peak of the Iraq crisis… We must have done something right together !

Just a few years ago, there was no French caucus on the Hill. Today we have a thriving French Caucus that numbers more than one hundred members in the Senate and the House. And I want to thank the more than twenty members of the caucus who are with us tonight, including its co-chairs, for their presence and their commitment.

I also want to pay tribute to the late Congressman Oberstar, a co-founder of the French caucus ; we owe him so much – and I want to thank his wife, Mrs. Jean Oberstar, for her presence and support.

On the diplomatic and security front, we are each other’s closest allies in the fight against terrorism, as exemplified by France’s leadership role in combating Al-Qaida in Africa, with much appreciated American support.

And our two countries are at the forefront of international efforts to prevent Iran from becoming a nuclear-weapon state. As we speak, the so-called P5+1 negotiations with Iran are going on in Vienna.

The French-American economic partnership is also growing stronger every year, and our collaboration in the field of research and innovation is just booming.

This is the key if we want to be together on the winning side of globalization, and that’s why innovation has been from day one a top priority during my tenure in the United States. I believe we have truly changed the equation here with a profound impact.

To give you just one example of this, every single day at the Embassy we conclude or help conclude agreements between American and French Universities and research centers and businesses on student exchanges, research collaboration and incubator partnerships leading to innovation. For instance it should come as no surprise that Stanford University established in Palaiseau near Paris its European entrepreneurship center, reminding us that entrepreneur is a French word…

The friendship between our two countries is at its strongest when it rests on two pillars : our shared history and values on one side, and our joint commitment to innovation and cross-investment on the other side. This is the case today.

And in the testing times the world is going through, the shared values that we are celebrating together on Bastille Day with many other nations are more than ever our best guide, I would even say our best moral compass, to confront together the current challenges we face.

So let me conclude on this positive note and in French: