It’s such a pleasure and privilege to welcome you today in my modest office, on my last day at the Embassy and on this very special occasion, as we are gathered here to honor Arnaud de Borchgrave, a World War II hero to whom France is eternally grateful, and one of the most remarkable journalists of our time who is also a great friend of France and an exceptional individual.

I would like to thank all of you who have joined us this afternoon to show your support and admiration for Arnaud de Borchgrave, with a special word of appreciation to his wife Alexandra, to whom I also want to pay tribute today – Alexandra, you too are an extraordinary person, a very successful writer and photographer and a great friend of France. And both of you are dear friends of Sophie’s and mine. 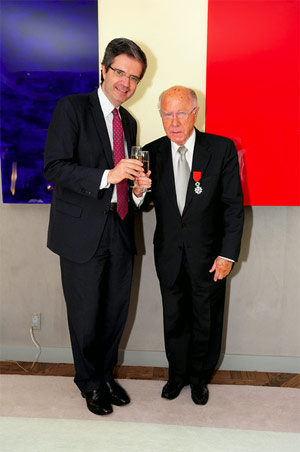 As you all know the Legion of Honor was created by Napoleon Bonaparte in 1802 to reward extraordinary accomplishments and outstanding services rendered to France.

You have accomplished so much in your life that it is difficult to briefly sum up all your outstanding achievements. I must say that your life story is an epic one. And if it has not yet been written or filmed, it should be soon! Votre vie est la meilleure réponse à tous les blasés – et quelle vie ! c’est comme si votre cœur battait naturellement au rythme du monde. 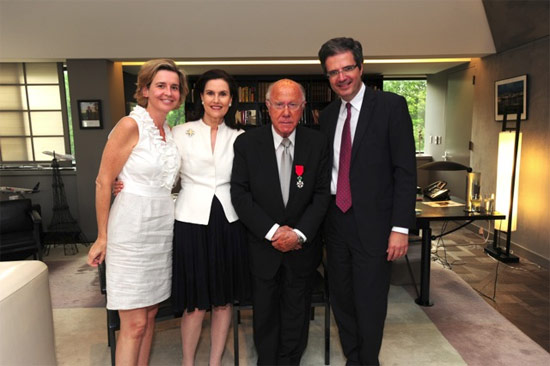 I would like to begin with your intimate ties to France, which encompass many decades. Your grandmother, Alice Cahen d’Anvers, was French (she would later become Lady Townshend, having married General Sir Charles Townshend of WWI fame). You were born in 1926 in Belgium to Audrey Dorothy Louise Townshend and the Belgian Count Baudouin de Borchgrave d’Altena, head of Belgium’s military intelligence for the government-in-exile during WWII.

On June 19, 1940, you escaped with your mother and sister on the last freighter from La Gironde, as the Germans occupied Bordeaux. What you didn’t know was that your Dutch captain was a 5th columnist who was sailing you and your family to Hamburg. Mercifully, a British Imperial Airways pilot, also an escaping refugee who got wind of the plot, jumped overboard, was picked up by a French fishing vessel, and made it to the British Consulate in Bordeaux as the Germans were occupying the city but had not yet taken over the Consulate.

Thus alerted, a British Royal Navy destroyer took you all on board in the Bay of Biscay (le Golfe de Gascogne) and sailed you to Falmouth—an incredible adventure that caused you to fall in love with the Royal Navy. Since you were not yet old enough to join it, your grandmother, Lady Townshend, signed a letter guaranteeing that you were 17 ½ years old, while you were still 16.

You served in the Navy from 1942 to 1946. On June 6, 1944, you were in a LCA (landing craft assault) heading to Juno Beach. Less than ten horrendous minutes before the landing, the ramp of your LCA got stuck after you had dropped off 31 soldiers from Canada’s Winnipeg regiment. You got hit in the leg and knee by the enemy as you were trying to lift the ramp by hand. That day, hundreds of your comrades, especially from the Canadian regiments, gave their lives.

The incredible story of your escape to England and then your participation in the D-Day landing have particular resonance today as we celebrate the 70th anniversary of that historic event. And your heroic action during D-Day was the beginning of an exceptional life.

Indeed, in the immediate post-war years, you joined United Press, when it was still a global news agency with 2,500 reporters around the world. In 1947 you were sent to Brussels where you were appointed Benelux bureau chief, succeeding Walter Cronkite who went on to Moscow. In those years, a time of fierce competition with the rival agency AP, you distinguished yourself with your coverage of the royal crisis that led to King Leopold’s abdication in 1950. It was therefore no surprise that the same year, Newsweek offered you a key position as its chief correspondent and bureau chief in Paris. At just 27 years of age, you became the magazine’s senior editor, a position you would hold for 25 years.

In this new role, you covered France and all of its colonies and overseas possessions at that time. That led you to French Indochina, where you became friends with Général René Cogny, who later became commander for northern Indochina.

After covering the war in Indochina, you covered the Algerian War, during which you interviewed the main protagonists of these events, including Ben Bella, the day before he was overthrown.

You recall that when Muir kept asking Général de Gaulle, two years before May 13, 1958, what he would do about Algeria if he returned to power, de Gaulle had replied with exasperation, “It’s completely obvious: Algeria will be independent and closely connected to France as part of a North African federation.” As we know, it was not so obvious then ….

You published so many famous interviews with world leaders during the 20th century that I can’t mention them all. Among them were conversations with President Nasser of Egypt, Prime Minister Levi Eshkol of Israel, and Prime Minister Dong of North Vietnam, during the Vietnam War.

After that brilliant career at Newsweek, you did not rest on your laurels. You brought your tireless energy and brilliant thinking to a variety of institutions in Washington, DC. Appointed editor-in-chief of the Washington Times in 1985, you later joined the renowned Center for Strategic and International Studies (CSIS) as a senior adviser and director of the Global Organized Crime Project, which became the Transnational Threats Project after 9/11.

You also served as president and CEO of United Press International from 1999 to 2001, and you continue to serve as editor-at-large for both UPI and the Washington Times.

Your multiple awards speak for themselves. There are too many to name, but let me mention Best Magazine Reporting from Abroad and Best Magazine Interpretation of Foreign Affairs, the World Business Council’s Medal of Honor (received in 1981), and the George Washington Medal of Honor for Excellence in Published Works in 1985. In 2007, the Phillips Foundation honored you with its Lifetime Achievement Award. At CSIS, you have co-authored numerous pieces on nuclear proliferation, cybercrime, and cyber terrorism and intelligence, among others. And I don’t want to leave out your best-selling novel The Spike, which you co-authored with Robert Moss in 1980.

Given your love story with France, it should come as no surprise that you met and married Alexandra shortly after you were appointed in Paris as Newsweek’s chief.

I know that your deep affection to my home country dates back to that time. Today, we also honor an extraordinary couple and the incredible efforts you’ve both made to nurture the deep relationship between our two countries.