Published on November 29, 2007
French author Alexis de Tocqueville is often described as the most acute foreign observer, in the 19th century but also today, of American society and culture through his book, “La Démocratie en Amérique” (“Democracy in America”).

A Nobleman Fascinated by Democracy 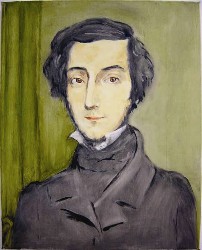 Born on July 29, 1805, in Paris to Hervé-Bonaventure Clérel de Tocqueville, a descendant of a noble Norman family, and Louise-Madeleine Le Peletier de Rosanbo, granddaughter of Malesherbes and sister-in-law of Chateaubriand, Alexis de Tocqueville spent his childhood in Verneuil studying under the private tutelage of the Abbé Lesueur. After studying rhetoric and philosophy at the College Royal in Metz, he specialized in law in Paris. Appointed juge auditeur (mediator) at the court of law in Versailles and later promoted to juge suppléant (substitute judge), he soon met his future wife, an Englishwoman named Mary Motley (they wed on October 26, 1835), and Gustave de Beaumont, who was to become his best friend.

Opposed to the government of King Louis Philippe, and eager to travel outside of France, Alexis de Tocqueville and Gustave de Beaumont went to America in 1831 to assess the new country’s prison system. Though the majority of their time was spent in Boston, New York and Philadelphia, they also ventured as far south as New Orleans and as far west as Michigan. As well as meeting with many ordinary Americans, Tocqueville gained additional insight by interviewing presidents Andrew Jackson and John Quincy Adams, as well as Charles Carroll (the last surviving signer of the Declaration of Independence).

Upon returning to France in March 1832, Beaumont began writing The United States Penitentiary System and its Application in France, with Tocqueville supplying facts and ideas. Their report inspired prison reform throughout Europe, but Tocqueville remains best known for his solo work, Democracy in America, which he finished on August 14, 1834. The success of the first edition of 500 copies led to a second printing in January of 1835, and later that year, Tocqueville received the Montyon prize from the French Academy for his book.

During France’s Second Republic (under the presidency of Louis-Napoleon) Tocqueville was elected to the new legislative Assembly and also appointed Minister of Foreign Affairs. After suffering a pulmonary attack and falling ill with tuberculosis in 1850, he began writing his Recollections, reflections on the February Revolution and on his ministry, which he finished in July 1851 (it was published posthumously in 1893). In response to Louis-Napoleon’s coup d’état and the start of the Second Empire in December, Tocqueville and about 50 other representatives opposed to the coup were briefly imprisoned. Undeterred, Tocqueville anonymously published an article in the London Times condemning the coup.

Leaving politics, he tried to regain his health and began research on his work The Old Regime and the Revolution. Completed in January 1856, it was met with great success. Tocqueville then relocated to Cannes in October 1858 and died six months later, on April 16, 1859, with his brother, Hippolyte, and his friend Beaumont by his side. He is buried in the village of Tocqueville. The husband of Tocqueville’s great-great-grandniece, Marie-Henriette Tocqueville, and two of their sons (one of whom is named Alexis) still live in France while another son lives in London.

“Democracy in America” A Seminal Work

Tocqueville’s best known work, Democracy in America, was first published in 1835 and followed by a second volume in 1840. It takes a critical approach to the analysis of the American psyche, and in so doing it identifies the necessary ingredients for a vibrant democracy. It also provides a glimpse into the everyday life of the 1830’s, by for instance characterizing cultural attitudes towards women, race and religion.

As he studies American society, one of the notions Tocqueville touches on includes "American Associationalism." This concept highlights the role played by institutions of civil society—such as families, voluntary associations, schools, businesses, churches and other religious organizations—and their connection to democracy. Tocqueville writes that "the strength of free peoples resides in the local community. Local institutions are to liberty what primary schools are to science; they put it within the people’s reach; they teach people to appreciate its peaceful enjoyment and accustom them to make use of it."

One of the most striking aspects of the book are its noticeably accurate predictions. Tocqueville projected that the controversy over the abolition of slavery would divide America and lead to a civil war. Additionally, he anticipated the rise of the United States and Russia as global superpowers.

Because Tocqueville analyzed America so penetratingly, and foresaw in part the future of U.S. society, his works are still highly regarded and studied today. Writers have referenced Tocqueville to illustrate their cause from both ends of the political spectrum. Politicians such as former President Bill Clinton and Speaker Newt Gingrich have quoted Tocqueville in their speeches, and Supreme Court Justice Anthony Kennedy cited Tocqueville’s reasoning in the case of Powers v. Ohio. Tocqueville’s observations about American culture and religion continue to prove relevant today.

“I confess that in America I saw more than America; I sought the image of democracy itself, with its inclinations, its character, its prejudices, and its passions, in order to learn what we have to fear or hope from its progress.”