The "Feast of the Epiphany," or "Little Christmas," is a traditionally Catholic festival celebrated on January 6 which commemorates the arrival of the three wise men at the birthplace of Jesus, according to the Bible, Christianity’s holy book. 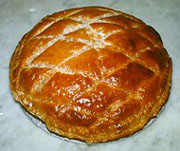 The festival makes for one of France’s most popular food events of the year. A galette, also known as a King Cake, is baked and shared among family and friends. Before baking, a fève—a small figurine in plastic—is hidden inside the cake. The lucky guest who finds the fève in his slice is crowned "king" or "queen," who may then choose his or her "queen" or "king" from among the guests present. The tradition is observed all over France in families, among friends and even at the workplace.

Preparation:Leave the puff pastry at room temperature for about 2 hours until defrosted but still cold.

Line a baking sheet or pizza pan with baking parchment or grease the pan and lightly sift flour on it. Shake off any excess flour. Roll each sheet of pastry into a circle about 12 inches across.

Place one circle on the prepared pan.

Mix the egg with the almond paste until smooth and spread the mixture evenly on the prepared circle of pastry, leaving a border 1 1/2 inches wide all around. If you have a small china, insert it into the almond mixture (you may also use a bean as the fève. The person who gets the fève is the King or Queen.

Place the second circle of pastry on top and press it down tightly around the rim.

Beat lightly the remaining egg and brush it on the top of the cake. With a long-bladed knife, press lightly but firmly through the egg glaze marking a crisscross pattern.

Bake for 20–25 minutes until golden and puffed. Do not check for doneness for at least 15 minutes, as the pastry may collapse. Serve slightly warm or cold.

Traditionally the galette is topped with a cardboard crown, which is given to the person who gets the fève.