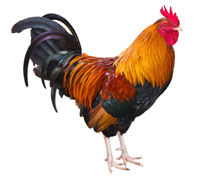 One of the national emblems of France, the Coq Gaulois (the Gallic Rooster) decorated French flags during the Revolution. It is the symbol of the French people because of the play on words of the Latin gallus meaning Gaul and gallus meaning coq, or rooster.

The rooster has been used as an ornament on church bell towers in France since the early Middle Ages, but at that time it was probably used to symbolize vigilance as roosters are known to crow at the expectation of the sunrise. The Gallic Rooster has been used for centuries by folk artists as a decorative motif on ceramics or carved and veneered wooden furniture.

The rooster played an important role as the revolutionary symbol, but it would become an official emblem under the July Monarchy and the Second Republic when it was seen on the pole of regiments’ flags. In 1830, the "Gallic Rooster" replaced the fleur-de-lis as the national emblem, and it was again discarded by Napoleon III.

Since 1848, the rooster has been seen on the seal of the Republic (Liberty is seated on a rudder decorated by a rooster); it was used from 1899 as a motif on gold 20 franc coins and it occasionally appears on stamps.

It is the emblem of French sports teams in international competitions.