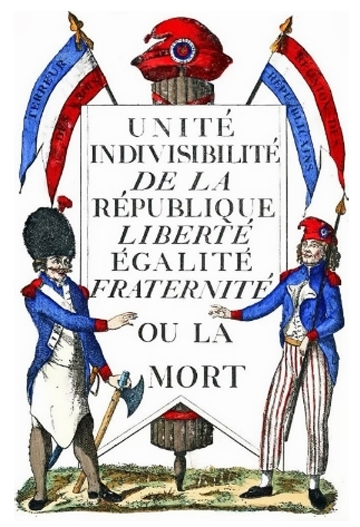 A legacy of the Age of Enlightenment, the motto "Liberté, Egalité, Fraternité" first appeared during the French Revolution. Although it was often called into question, it finally established itself under the Third Republic. It was written into the 1958 Constitution and is part nowadays of the French national heritage.

Linked by Fénelon at the end of the 17th century, the notions of liberty, equality and fraternity became more widespread during the Age of Enlightenment.

From 1793 onwards, Parisians, soon to be imitated by the inhabitants of other cities, painted the following words on the façades of their houses: "Unity, indivisibility of the Republic; liberty, equality or death". But they were soon asked to erase the phrase’s final part as it was too closely associated with the Terror...

This motto fell into disuse under the Empire, like many revolutionary symbols. It reappeared during the Revolution of 1848 marked with a religious dimension: priests celebrated the "Christ-Fraternité" and blessed the trees of liberty that were planted at the time. When the Constitution of 1848 was drafted, the motto "Liberty, Equality, Fraternity" was defined as a "principle" of the Republic.

Discarded under the Second Empire, this motto finally established itself under the Third Republic, although some people still objected to it, including partisans of the Republic: solidarity was sometimes preferred to equality which implies a levelling of society, and the Christian connotation of fraternity was not accepted by everyone.

This motto was inscribed again on the pediments of public buildings on the occasion of the celebration of July 14, 1880. It appears in the constitutions of 1946 and 1958 and is today an integral part of our national heritage. It is found on items used by the general public such as coins and postage stamps.